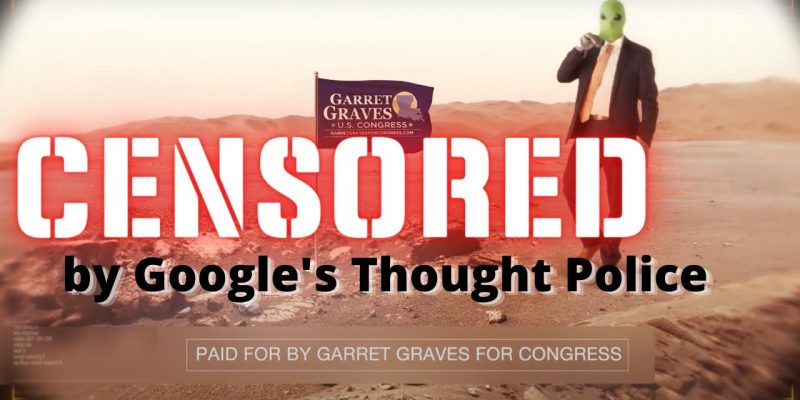 In a move right in line with what we know and love Google for, the tech giant has censored Congressman Garret Graves’ newest halloween themed ad! The silicon valley thought police have taken what any reasonable person would see as a clear joke and turned it into a reason for the de-platforming of a conservative US Congressman.

In the ad, Graves’ daughter (sitting on Mars, dressed in a martian costume) asks voters to vote for her dad nonchalantly while casually eating potato chips. After making that plea to voters, she puts a martian mask on and walks off camera saying “I guess I’ll go mess with the Russians now…” – a clear tongue in cheek reference to the space race and alien conspiracies. That single utterance of the boogie-land known as Russia caused Google to censor the video.

Though this quirky, joking ad was nothing more than a Halloween-themed campaign message, the thought police at Google show no mercy when it comes to censoring people they don’t like. They’ll use any excuse they can find to shut down dissenting voices.

“Google’s leftist monopoly has become culture police and is suppressing this clearly-light-hearted web ad that the Garret Graves campaign planned to release in time for Halloween, apparently because a 10-year-old says the word “Russians” in it.

Help Garret call on Google to remove the culture mask (that they think is protecting us) and to allow Americans to think and act responsibly for themselves by sharing this video link with a friend.”

You don’t have to think the ad is the greatest thing ever or that it strikes a particular blow for free speech in and of itself in order to share it everywhere. It’s worth doing that for the sole purpose of jamming a thumb into the eye of a monopolistic, evil and hopefully soon-to-be-broken-up totalitarian company which has turned its back on the intellectual freedom which helped to create it.

We should fight back against Big Tech’s efforts to manipulate the information we see at every turn. Here’s an opportunity to do that. Feel free to share the video of the ad just to stick it to Google.