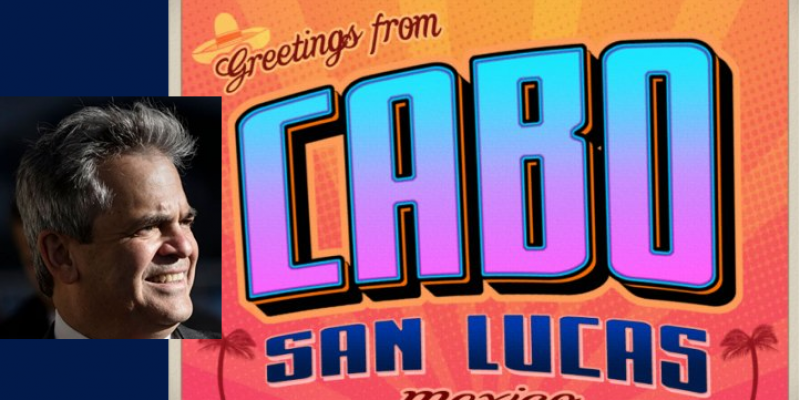 #Cabo is now trending on social media after Austin Mayor Steve Adler was discovered to have taken a trip to Mexico during a citywide lockdown.

This development sheds some light on a mysterious exemption to emergency COVID-19 closures The Hayride discovered in March — airport sky lounges.

But first, the situation at hand, via KVUE-TV which broke the story:

Austin Mayor Steve Adler’s early November trip to Cabo San Lucas, Mexico, after hosting his daughter’s wedding is getting attention and reaction on the local and national level [now international].

The KVUE Defenders reported Wednesday that both the wedding and the vacation happened as health officials urged families to not gather with others outside of their households to help slow the spread of COVID-19. The mayor himself also asked people to stay home if they could.

Adler encouraged others to stay home during a Facebook video message posted Nov. 9, which the mayor confirmed was filmed while he was in Mexico on vacation with eight people, including immediate and extended family. (Read more.)

The mayor confirmed that when the video was recorded, he was in Mexico on vacation with eight people, including immediate and extended family, after flying from Austin on a private jet.

Two days earlier, Adler hosted a wedding and reception at Hotel Saint Cecilia, a South Congress Avenue hotel, for his daughter with 20 guests.

At the time, Austin was under Stage 3 guidelines, which suggest no gatherings of more than 10 people. (Read more.)

Now back to the sky lounges. Gas stations, convenience stores, hotels, and food trucks were exempt in the order, which was understandable. But tucked into Mayor Adler’s emergency order was an exemption for exclusive clubs that cater to frequent fliers and airline staff.

From our previous article:

The Hayride called the City of Austin for comment, and was forwarded to a public information “hotline” for COVID-19-related questions. Restaurants in the airport must close to sit-down dining, but all may offer food to go. The sky lounges may allow table service but the city’s ban on gatherings of 10 or more applies, a spokesperson said.

… We checked and could not find by the time of writing any federal regulations or other red tape that would prevent the city from closing sky lounges.

To be fair, sky lounges are often not simply restaurants and bars. Many offer private shower suites, business kiosks, and sometimes beauty salons. We do not see that hotels are under any restrictions, so maybe some of that hospitality-based reasoning applies here. If so, the city’s hotline had no such commentary.

If recent COVID-19 responses have taught us anything it’s that government has sweeping emergency powers and can make seemingly arbitrary exemptions like these. Think of what goes on in the hours before and days after a major hurricane and you get the idea.

The boundaries of what is fair and what is constitutional are determined by the courts. We can expect this exemption to inspire no shortage of lawsuits in the near future.

In the city’s emergency declaration there is no clear definition of what a “sky lounge” consists of. Is the term limited to only luxe airline-owned clubs? If not, what about the bar at the airport Chili’s, that constitutes as a lounge at an airport? What if an enterprising entrepreneur were to open his pizza joint to rooftop drone traffic? What about a hamburger stand at a municipal airfield (not posh enough)?

We even found a downtown Austin bar in town called Sky Lounge (suspiciously, a nine-minute walk from Austin City Hall). It has nothing to do with the airport but a view of the sky (and condo towers) from atop a roof.

From the hip: CaboGate continues to brew … while local businesses and developments flounder.

Citizen activists have been looking into allegations that Adler may have used city funds to charter the private plane, but this has not been confirmed at the time of writing.

Adler has since apologized and said he wouldn’t be doing any Christmas globetrotting.

This story will be developing.