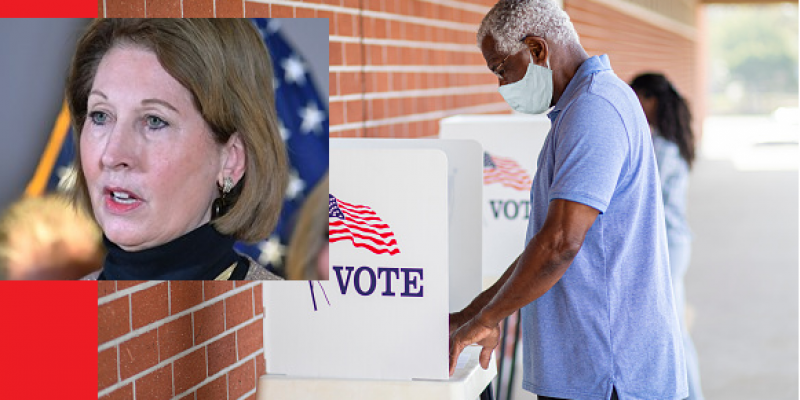 The Trump Administration today presented evidence that there may be significant voting tabulation irregularities taking place in Georgia that could greatly affect the 2020 General Election, including “secret suitcases” full of ballots (see more on that below).

As a fine-toothed comb is taken to ballots in the Peachtree State, influential figures in the effort to ensure fair elections are doing everything they can to make absolutely sure that not only Republicans will lose the Georgia Senate Runoff but that national Democrats will retain control on Capitol Hill – fraud or no fraud.

“I would encourage all Georgians to make it known that you will not vote at all until your vote is secure – and I mean that regardless of party,” said Sydney Powell, a former attorney for Team Trump, at a rally. “We can’t live in a republic – a free republic – unless we know our votes are legal and secure. So we must have voter ID and we probably must go back to paper ballots that are signed and have your thumbprint on them. We certainly should be able to find a system that can count them, even if it has to be done by hand.”

Met with cheers, her call was echoed by fellow attorney Lin Wood:

“This is Georgia. We ain’t dumb. We’re not going to go vote on January Fifth on another machine made by China. You’re not going to fool Georgians again. If [Republican candidates] Kelly Loeffler wants your vote, if David Perdue wants your vote, they’ve got to earn it,” Wood said. “They’ve got to demand publicly, repeatedly, consistently: [Gov.] Brian Kemp, call a special session of the Georgia State Legislature. And if they do not do it…they have not earned your vote.”

Leading Republicans, including President Donald Trump, expressed concern that Georgians could withhold support for Loeffler and Perdue in the high-stakes runoff as the current Senate differential sits at 50 Republicans to 48 Democrats. Trump is expected to appear at a rally on Saturday to rally the vote. According to Fox News, Loeffler’s Senate predecessor, Johnny Isakson, urged Republicans to ignore calls to participate in a boycott along with 16 colleagues.

Recent polling suggests that Democrat John Ossoff and Perdue about even, while Democrat Rev. Raphael Warnock is slightly leading Loeffler. Activists from all over the nation are engaged in efforts to change that picture through deployment of volunteers, letters to voters, and (accusations of) the urging of temporary voter registration.

From the hip: With a razor-thin margin, any chiseling away of Republican support could easily hand the Democrats the two seats necessary to block Republican control of the upper chamber.

A vote boycott would inarguably hurt the conservative cause – especially as Democrats-plus-one-Republican could clear the way for a Joe Biden administration to (conceptually) pack the U.S. Supreme Court with activist jurists who have more in common with Elena Kagan than Amy Coney Barrett. And that’s not counting the numerous federal benches with judges nearing retirement.

This assumes that enough improperly counted votes are not unearthed in key states and Trump does not finally win re-election. A Trump re-election victory is statistically unlikely. This isn’t to say the concern over rigging the vote hasn’t been helpful in shining a high-intensity spotlight on long-ignored problems with state-per-state and county-per-county vote-counting procedures. But this level of systemic reform will require a long-term effort that will last much longer than the Jan. 5 Georgia Senate runoffs.

And about voter fraud, here’s the accusation regarding the “secret suitcases:”

Breaking…live in Atlanta ⁦@GASenateGOP⁩ hearings ⁦@realDonaldTrump⁩ lawyer team breaks a video that shows 4 black boxes stuffed with ballots taken in from another room from locked desks AFTER everyone was tossed out for the nite. These were then scanned in darkness. pic.twitter.com/9TW1QRQYAB

Watch secret suitcases appear in the middle of the night full of ballots and tell me this election is legit. #stopthesteal pic.twitter.com/PQBvBrwBYd

The courts will have the final word on whether these challenges have merit. In the meantime, voters who abstain from turning out to support Perdue or Loeffler represent votes that are absolutely certain to never be counted.