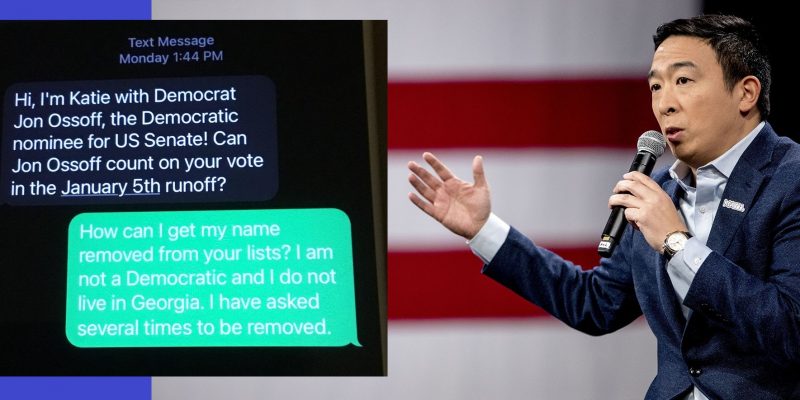 Last week The Hayride reported on a piece of “mystery mail” that arrived in an Austin post office box but was addressed to rural Georgia, urging the intended recipient to vote Democratic in the upcoming Senate runoff.

Now Austin residents are receiving multiple, mysterious text messages urging proper registration ahead of the runoff elections between Republican incumbents David Perdue and Kelly Loeffler and their Democratic challengers Jon Ossoff and Rev. Raphael Warnock. Control of the U.S. Senate is at stake with the current break between the GOP and Democrats being 50-50. 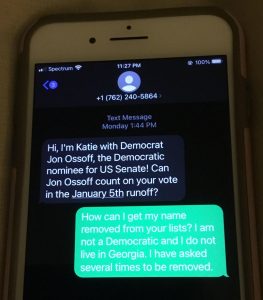 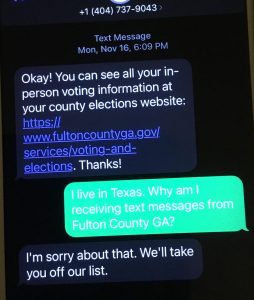 Both of the above photos of phone screens are from a phone assigned to a number with a 512 area code. They confirm word-of-mouth reports we received of similar messages texted to Austin phone subscribers. Wrong numbers intended for former Austin-area residents now living in Georgia, perhaps. But another possibility, Georgia election officials are warning, is an attempt at voter fraud.

According to WSB-TV in Atlanta:

“Let me be clear about this: If you want to move to Georgia and be a part of the No. 1 state in America to do business, we are happy to have you,” said Gabriel Sterling. “It’s great to have you come in. But if you are here for the sole sake of politics…. If you voted for Senate in one state and moved here to another state, I know that’s another thing that could potentially go before the courts because you’ve already cast a vote for a body that could be seated in January. Don’t game our system.”

Sterling referenced the high-profile announcement coming from former Democratic presidential candidate Andrew Yang, who declared he was moving to Georgia to help canvass in the January 5th runoffs.

“I know there’s been discussion about people coming from out of state, Andrew Yang being the most famous to come help Georgia see the light and do the right thing,” Sterling said, mocking the idea of the state turning in the wrong direction.

Georgia residents have until Dec. 7 to move to the Peachtree State, register to vote, and obtain state-required documents for voting such as a driver licenses, in order to vote in the Jan. 5 runoffs.

The state’s attorney general’s office said in a press release any form of voter fraud is a felony and could carry a 10-year sentence and/or a $100,000 fine. Below is the text of the release.

Secretary of State Brad Raffensperger issued a warning to groups that are helping individuals move to Georgia solely for the purpose of voting in the January Senate runoffs elections. Groups that finance or organize such efforts are involved in conspiracy to commit voter fraud and could be charged under Georgia’s Racketeering Conspiracy laws.

“Make no mistake about it, I will seek to prosecute those who try to undermine our elections to the fullest extent of the law,” said Raffensperger. “The integrity of our elections is paramount. Outside groups who seek to interfere with democracy in Georgia should be forewarned that the consequences will be severe.”

Georgia law is clear about the seriousness of the crime committed by those looking to come to Georgia solely for the purpose of voting in the January 5 Senate runoff elections.

OCGA § 21-2-21(a)(4) requires that registrants be “a resident of this state and of the county or municipality in which he or she seeks to vote.” O.C.G.A. § 21-2-217(a)(1) adds that “the residence of any person shall be held to be in that place in which such person’s habitation is fixed, without any present intention of removing therefrom;” this would include individuals who move to Georgia solely for the sake of casting a ballot in an election with no intention of remaining in the state.

False registration, i.e. someone who registers to vote knowing that they do not possess the qualifications required by law, is a felony and can be punished by between one and ten years in prison, and/or up to a $100,000 fine (O.C.G.A § 21-2-561).

Any individual or group who organizes or finances efforts to bring individuals to Georgia to register falsely as electors may also potentially be charged with felony racketeering under O.C.G.A. § 16-14-3(5)(A)(xxii), which can be punishable by between 5 and 20 years in prison and a fine of up to $25,000 PER COUNT (O.C.G.A. § 16-14-5).