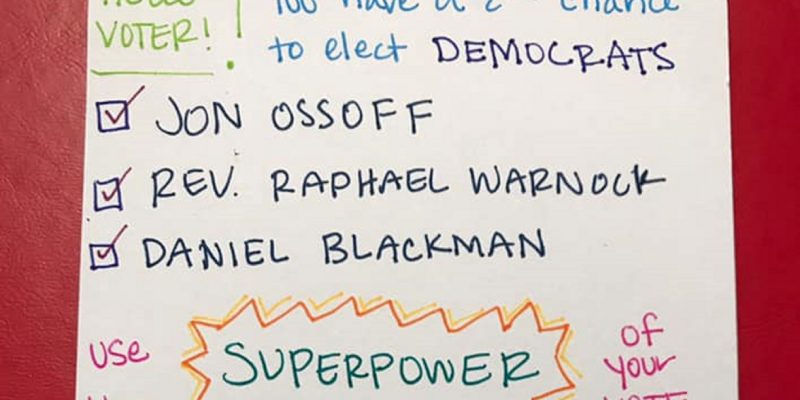 If you’re in Georgia and receive a postcard in the mail urging you to vote for Democrats in the Senate runoffs, do not automatically assume it’s from a local, grassroots effort to drive voter turnout. A resident of Austin, Texas, found an unmarked postcard in his mailbox addressed to a “VIP voter” in rural Georgia. The Travis Tracker has more on this “mystery mail” below.

An incorrectly delivered postcard found in an Austin mailbox sheds light on a way liberal activists are using out-of-state volunteerism to drive turnout in the Georgia U.S. Senate runoffs.

It appears a stealthy postcard campaign is responsible for the misplaced mail. The effort is being conducted relatively under the radar, without a noticeable way to trace who is paying for the cards or stamps, no disclaimer on the cards, or information on who offered the manpower to process the cards.

The wayward postcard, discovered this week in a North Austin post office box without a postmark or stamp cancellation, urges a vote in the Georgia U.S. Senate runoff for Democrats Jon Ossoff and Rev. Raphael Warnock. Ossoff and Warnock are opposed by incumbent Republicans David Perdue and Kelly Loeffler, respectively. 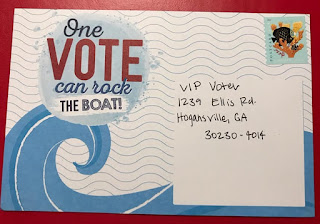 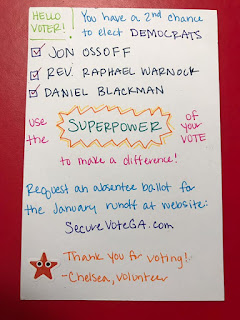 The recipient requested he remain anonymous. He suspects the card may have been dropped and returned to a random USPS mailbox by a Good Samaritan or it was written locally but was not properly processed by postal employees.

The Georgia election is scheduled for Jan. 5, 2021 — making this the last major hurdle of the 2020 election cycle, with control of the U.S. Senate in the crosshairs as the earlier votes are still being recounted by hand.

Another endorsement on the postcard demonstrates a level of political finesse that’s not exactly your typical Texan’s knowledge of Peach Tree State politics. The card encourages a vote for Democrat Daniel Blackman who is in the runoff against Republican Lauren McDonald Jr. for Georgia Public Service Commission, a state-level body that regulates public utilities and business incentives. The commission has five geographic districts, making the card’s accurate selection of races all the more likely a part of a professional political effort and not a spontaneous howdy from a charged-up Democrat in Texas.

A similar postcard was reported on by political blog Must Read Alaska in September — the card hoping to affect a close election in the Last Frontier. The blog called the postcard “possibly illegal.” The Main Street Daily News in Gainesville, Fla., reported on graphically similar cards being used to popularize mail-in ballot requests. The Hill reported on similar efforts being employed to support Joe Biden without questioning their legality.

The postcard found in Austin, featuring a blue wave but no pre-printed election-specific information, appears to be available in a stack of 100 for $13 on Amazon.

Since the misdirected postcard did not contain a return address we cannot determine who is organizing the mail push. One of several postcard services that favor liberal candidates, Georgia-based Postcards to Voters (started in 2017 to benefit Ossoff and which supports him currently), describes an automated process:

… [W]e consist of over 75,000+ volunteers in every state (including Alaska and Hawaii) who have written close to 8 million postcards to voters in over 200 key, close elections.

We use an interactive texting service (Abby The Address Bot) to assign addresses to our trusted, returning volunteers. For new volunteers and those organizing postcard parties around the country, we use a commercial Help Desk system to streamline and automate email requests.

Another commercial business intelligence package crunches the numbers so we always know who our top volunteers are by campaign, a heat-map showing where the postcards are being written by zip code around the country, and other essential dashboards to manage an operation that now averages 5,000 voter addresses assigned daily.

Participants must first become “approved writers” to access the list of candidates being supported, addresses, and other info. This process involves the mailing of a practice card — we suspect Republican voter addresses are filtered out.

“Only sign your first name or initials. Never include return address, your own email address, your last name, or your social media handle or account name,” the site reads. “Signing your full name is a security risk, and we wouldn’t want anything to happen to you.”

A simple Google search turned up a Facebook post by Democrats in a Connecticut town, urging supporters to pick up pre-stamped cards with no federal, state, or other disclaimers. No Austin-based letter writing campaign could be found at the time of publishing this article.

On a search for the cards on Amazon, several customer reviews reveal that the cards being purchased are/were being used to affect elections in Georgia and Wisconsin. 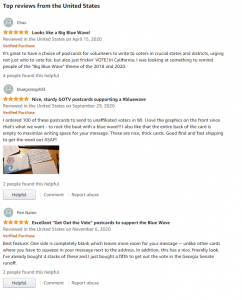 According to an FAQ on Postcards4VA, another service that favors Democratic candidates, the process is legal when rules are followed carefully. This service requires disclaimers and reports of in-kind donations — unlike the card discovered in Austin.

“The bottom line is we would hate to have a negative story on the front page of the paper about our postcards not following the rules or get our candidates fined. We spend too much time helping get out the vote to waste time, energy and money on an FEC complaint and/or a bad news story,” Postcards4VA’s site read.

The approach seems to be gathering steam.

In a recent podcast interview, Tony McMullin (aka. “Tony the Democrat”), the founder of Postcards to Voters, said in the two months before the 2018 election, the group wrote nearly 2 million postcards for 32 campaigns. He said he was supporting himself by doing occasional consulting work and selling postcards.

Those are the more somewhat above-ground efforts. Further below the radar, and in Travis County, there have been attempts at voter intimidation via postcards this cycle. (There is no known connection to any of the aforementioned efforts.) See below for two postcards threatening retribution (submitted by Your Minute Is Up, a PAC organizing a recall petition effort of Austin City Council candidates): 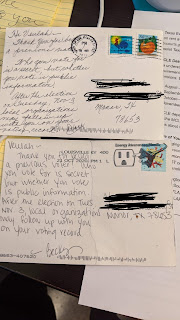 The Travis Tracker is looking into the legality of this recent spate of postcard activism and whether federal and state election reporting is required, along with printed disclaimers.