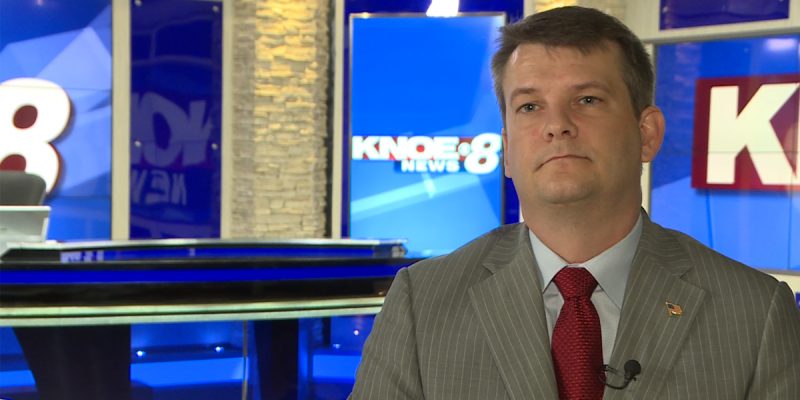 It seems like an awfully random thing, as Letlow didn’t fit any of the normal high-risk categories and the vast, vast majority of people who have perished from the Chinese virus have been in those, but when Louisiana’s 5th District congressman-elect fell ill with COVID-19 a couple of weeks ago and kept getting progressively worse, it was time to worry.

And now the Bayou State has lost one of its most promising young political leaders.

Letlow, 41, was transferred from St. Francis Medical Center to the Ochsner LSU Health ICU on Dec. 23 and has been treated there since then.

Letlow is survived by his wife, Julia Barnhill Letlow, and two young children.

“The family appreciates the numerous prayers and support over the past days but asks for privacy during this difficult and unexpected time,” the family said in a statement. “A statement from the family along with funeral arrangements will be announced at a later time.”

Letlow, R-Start, announced Dec. 18 he tested positive for COVID-19 and was first quarantining at his Richland Parish home.

But on Dec. 19, he was admitted to St. Francis as symptoms persisted and eventually he was transferred to Shreveport.

Letlow came on like gangbusters in the November election, capturing a robust 62 percent of the vote against state representative Lance Harris in the runoff. It was his first, and ultimately his only, run at political office.

But shortly after the election, a ripple of the Chinese virus ran through his campaign staff, and while most of them were not seriously ill from it Letlow’s luck wasn’t so good. The word is it was actually a blood clot which killed him, but blood clotting is a common feature in serious COVID cases.

It’s a tragedy on every level. Politically, it means there will have to be another election, likely in the spring, for yet another 5th District congressman – the fifth in a decade. It’ll be hard to find someone with Letlow’s talent and passion both for the district and the conservative cause. 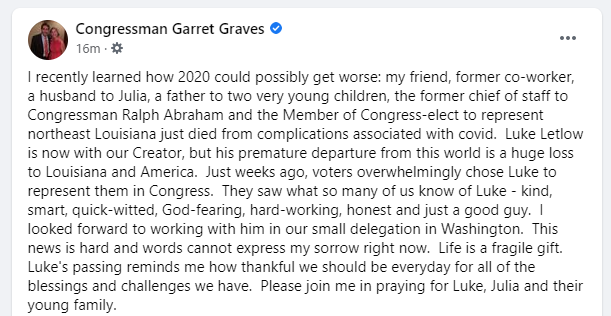 “Tonight, Louisiana lost a great man. A promising public servant, a loving husband and father, a Louisianan through and through. I want to extend my deepest condolences to his family and my most sincerest appreciation for having known him and the privilege of calling him a friend. Louisiana needs more men like Luke and I pray that his legacy will serve as a role model for others to follow in his footsteps.”

And Louisiana’s congressional delegation got together for a statement…

“We are devastated to hear of Luke Letlow’s passing. Luke had such a positive spirit, and a tremendously bright future ahead of him. He was looking forward to serving the people of Louisiana in Congress, and we were excited to welcome him to our delegation where he was ready to make an even greater impact on our state and our Nation. More than anything, Luke was a loving husband, father, brother, and son, and his family – like so many others who have been affected by this evil disease – needs our prayers.

“We all join in sending our strongest support to Luke’s wife Julia and their young family, and are keeping them in our prayers.”

We are devastated by the news of Congressman-Elect Luke Letlow’s passing. We have lost a rising political star and a good friend. He was a loving husband and father, and we ask for your prayers for his family at this difficult time.

Interested in more national news? We've got you covered! See More National News
Previous Article The Casino Business Is Dying In Louisiana
Next Article BAYHAM: Luke Letlow Was One Of The Very Best Men