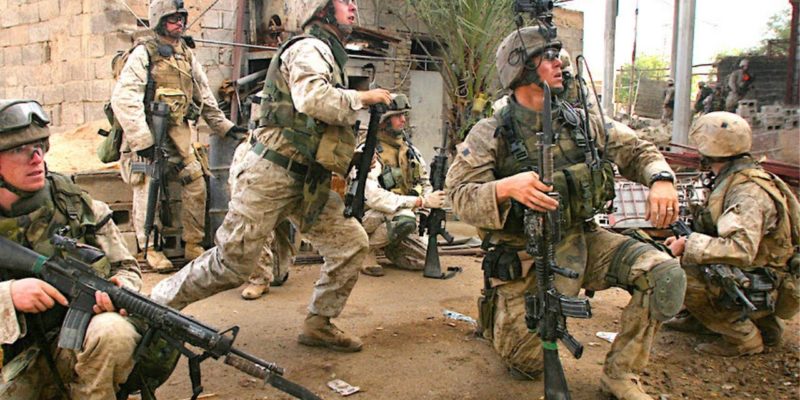 Where do we get such men? This is why I have always been in awe of US Marines.

This Marine in the video below, Lance Corporal Joshua Dickinson, was shot through this left bicep at the outset of the operation to oust Al Qaeda from Fallujah. This, along with Ramadi, was the operation which broke the back of Al Qaeda in Iraq. At the time, Fallujah and Ramadi were perhaps the two most dangerous places on earth. After the 1st Marine Division was through, they actually held a 5K race through the area because it was so peaceful, certainly safer than most big US cities.

Lance Corporal Dickinson’s only concern is that he doesn’t want to get medevaced for his wounds. He wants to stay in the fight. He doesn’t care about a Purple Heart.

I have had close friends tell me the same, privately. Marines don’t go to war reluctantly or grudgingly. They for the most part go willingly, perhaps with grim determination.

Tragically, a month later, back in the fight, Joshua Dickinson was killed in action.

But to paraphrase General Patton: we should not mourn such men. We should thank God that they lived. And as the mythical Admiral Tarrant said in “The Bridges at Toko Ri”: “Where do we find such men?”

As Christmas approaches, with all the uncertainty, controversy and division among us, we can at least be thankful for men like Lance Corporal Dickinson and we can be certain they will be there to answer the call when the time comes.

God: Thank You for Joshua Dickinson. May God bless and keep his soul. God bless all Marines and all our men and women who face our fears, be they Marines, soldiers, sailors or airmen, or police officers, firefighters or first responders. And may God bless America.


Interested in more national news? We've got you covered! See More National News
Previous Article Louisiana has the greatest number of residents in prison compared to other states
Next Article ALEXANDER: A Christmas Reflection