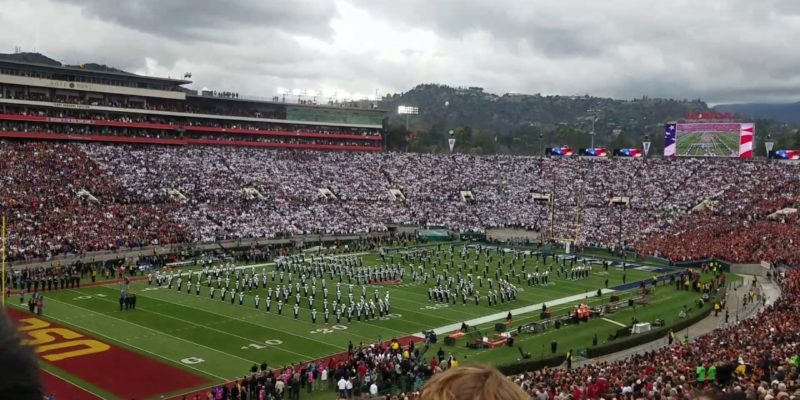 It’s almost a cliché around the Lone Star State that Californians are moving to Texas in record numbers. Coming along with them are their institutions, which now includes a vaunted New Year’s Day tradition of 116 years.

Just recently, tech giants HP Enterprises and Oracle announced they will be moving to Texas, and innovator Elon Musk moved Tesla and his tunnel-boring company to just outside of Austin. The list goes on as the Golden State’s grasp on all aspects of personal life and business practices continues. Even Hollywood has been taking a hit over the last decade, and lately from reduced theater-going under COVID-19 restrictions.

Over the weekend, the sports world received quite a shock: the College Football Playoff semifinal game is moving from the iconic Rose Bowl in Pasadena, Calif., to AT&T Stadium in the Dallas-Fort Worth area. The equally iconic Tournament of Roses Parade was canceled outright months ago, with 2021’s theme postponed until 2022.

Yes, the Granddaddy of Them All (a trademarked term for the playoff, by the way) is moving to Jerry World in Arlington, Texas, a Dallas-Fort Worth suburb which is home to the Dallas Cowboys as well as the Texas Rangers. Here’s how the unthinkable happened:

The Tournament of Roses appealed to California state health officials to allow up to 500 spectators in the 95,000-seat stadium to allow for the families of players to attend. This request was denied “based on state and county guidelines related to COVID-19 and [Los Angeles] County’s Tier 1 status.”

“We know that the decision was not an easy one to make,” David Eads, CEO and executive director of the Tournament of Roses, said in a press release. “While we remain confident that a game could have been played at the Rose Bowl Stadium, as evident in the other collegiate and professional games taking place in the region, the projection of COVID-19 cases in the region has continued on an upward trend.”

The No. 1 CFP-ranked University of Alabama Crimson Tide, champions of the Southeastern Conference, and the No. 4-CFP-ranked University of Notre Dame, are scheduled to face each other in what is formally titled “the College Football Playoff Semifinal at the Rose Bowl Game Presented by Capital One” (that name may change) at 3 p.m. (Central Standard Time) Jan. 1. Tickets go on sale 1 p.m. Wednesday.

Capacity is limited at the AT&T Stadium to the typical “two yards” between persons, with CDC guidelines firmly in place.

The semifinal is expected to be the eighth overall meeting between Alabama and Notre Dame (Notre Dame leads 5 wins to 2 losses this season), and the first time the teams have met in a CFP Semifinal. The teams last faced each other in the BCS National Championship in 2013. Alabama beat Notre Dame, 42-14 points to win the National Championship.

Alabama was selected for its sixth College Football Playoff appearance after the Crimson Tide won their 28th SEC Championship with a win against Florida, 52-46 points, on Saturday. Alabama finished the season 11 wins to zero losses overall and with a solid record in conference games. The Crimson Tide teams has won six of the last nine SEC football titles.

Notre Dame finished the season 10 wins to zero losses overall and with nine wins and no losses in conference play. In the Fighting Irish team’s first season of conference play in school history, Notre Dame qualified for the ACC Championship. The Irish are making their second appearance in College Football Playoff, with both games occurring at AT&T Stadium. Notre Dame played in the 2019 CFP Semifinal at the Cotton Bowl against Clemson.

From the hip: California taxpayers and non-profit managers may wish to ask Gov. Gavin Newsom if it’s that difficult to spread 500 people around a 95,000-capacity stadium.

This may have been a safety concern based mostly on county-level decision-making. But the refusal to intervene will have immediate economic consequences.

For starters, the Rose Bowl raked in $92 million in 2019. The lack of a game and a parade is a significant hit to an economy that’s already hurting so much that many are pulling up stakes and moving rather than waiting it out. The bleeding continues.

Secondly, non-profits will continue to feel the pain. According to Daniel Kaplan of The Athletic blog, the Tournament of Roses’s share of television and sponsorship income “will be lost without the game staged at all … The Rose Bowl represented more than 90 percent of the group’s revenue, so the loss of the game appears to be a massive financial hit. The nonprofit had net assets on its books of $42 million, according to the tax return. Of its $101 million of expenses, $76 million were charitable grants.”

Some things are worth the risk. Saving California’s economy might be worth even just the moderate risk of allowing a limited number of friends and family to attend a century-old event that even played during the Spanish Flu and World War I. Known as the Tournament East-West in 1918, and with college teams lacking players due to wartime conscriptment, the Rose Bowl hosted the Great Lakes area Navy team and the Marines of Mare Island (the sailors won 17 to zip, by the way). No word on how many people got the Spanish Flu from that game.

We’re not the Greatest Generation, nor the generation that won the first World War. Far from it: but the fact remains we can’t even watch a football game in this generation. And that is a commentary louder than the decibel-level of a stadium under normal crowd conditions.

In the meantime, Texas will gladly take the money: we have budget woes of our own to attend to.