We’ve heard a bunch of names thrown around as potentially responsible for the attack mailer that went out in St. Bernard Parish this week, targeting Hayride contributor, Republican State Central Committee member and LAGOP secretary Mike Bayham, but we aren’t going to repeat any of them.

Because what we have to say about whoever it is who’s responsible for this outrage would surely result in a lawsuit for defamation, with the affirmative defense that it’s impossible to defame people of such manifestly low character.

There are RSCC races afoot around the state, and tomorrow is the election in which the State Central Committee will be formed up. Some of those races are set to be competitive. Bayham’s isn’t expected to be one. His opponent, Walter Burtanog, is or was an investigator for the St. Tammany District Attorney’s office; so far as we can tell he’s never run for anything before.

We don’t know or even have any particular reason to think Burtanog was behind this mailer. Somebody was, though, and while Bayham has made enemies over the time he’s been involved in state Republican politics it’s pretty hard to justify this… 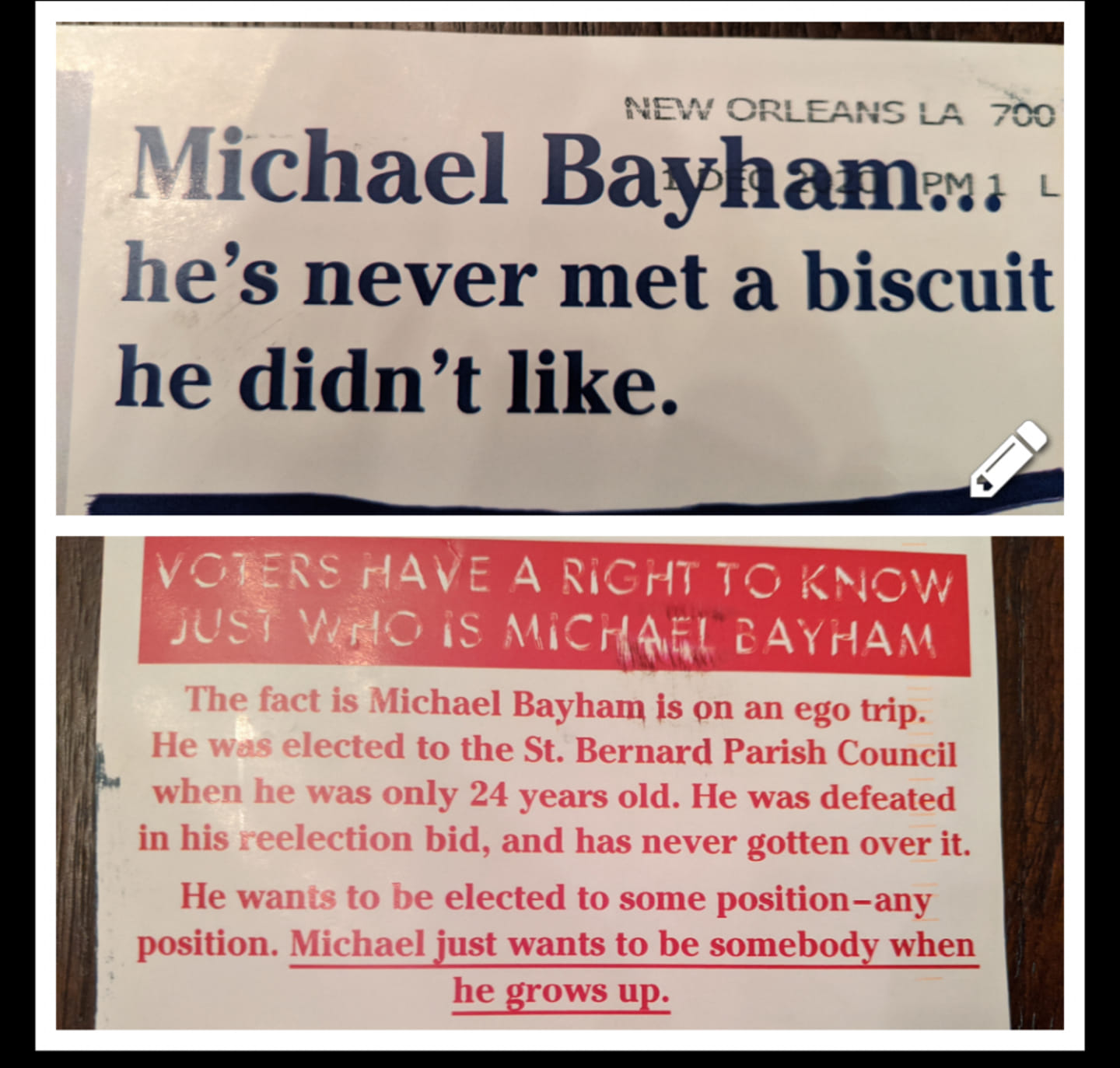 It’s actually a lot worse than this. The full mailer has degrading imagery and even some other stuff.

Needless to say, an intensely personal attack like this which makes not a single accusation of any incompetence, moral turpitude or ideological heresies in a race for a State Central Committee seat says a lot more about the people making it than it does about the target of the attack.

Calling somebody a poopy-head, which is essentially what this is, offers no value.

And calling Bayham fat? We won’t say any of the names involved without firm knowledge they’re involved, but if the rumors and speculation are true, at least two of them have absolutely zero standing to trash anybody else’s physique.

The Louisiana GOP has had a problem for some time with the fact that people are coming into the party from backgrounds as Democrat political scumbags who lost their home in that party due to demographic changes. Some of them have apparently allied with others who are among the on-the-outs crowd in the party’s leadership, and if those people were to assume control there would be literally nothing left for conservatives to vote for.

Say what you want about Bayham, but he’s been a positive force for building the LAGOP. He’s done nothing to deserve this kind of treatment. The low-rent operators responsible for this juvenile and valueless attack can’t say the same.