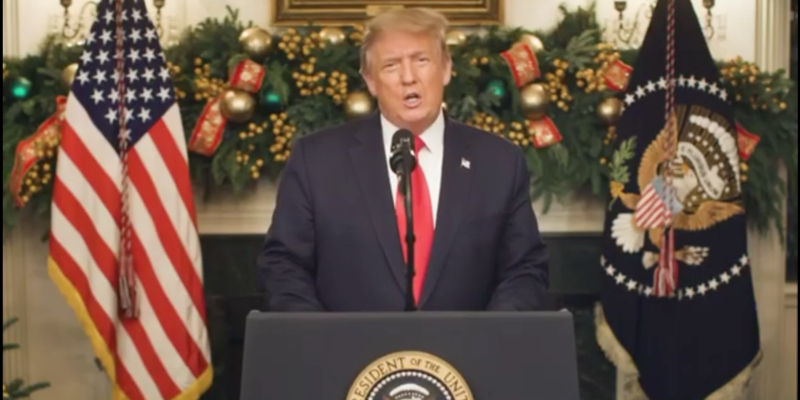 President Trump scolded Congress on Tuesday for their $900 billion COVID-related stimulus bill which is filled with far too much wasteful spending which has nothing to do with the coronavirus or economic relief to American families and businesses.

The president began the remarks by slamming Democrats for blocking legislation aimed at providing economic relief over the summer.

He demanded the $600 checks per adult & child be increased to $2,000 and that foreign aid & certain domestic spending be removed from the legislation. Trump also alleged that the current bill provides three times more money to family members of illegal immigrants.

“I am also asking Congress to immediately get rid of the wasteful and unnecessary items from this legislation and to send me a suitable bill or else the next administration will have to deliver a COVID relief package, and maybe that administration will be me and we will get it done,” Trump continued. “Congress found plenty of money for foreign countries and lobbyists and special interests, while sending the bare minimum to the American people who need it.”

The president took several minutes to specifically outline the worst features of the nearly $1 trillion spending bill including the following:

He concluded these remarks by saying something that is sure to make the opposition’s hair stand up on the back of their necks. See them for yourself below!

Interested in more national news? We've got you covered! See More National News
Previous Article BAYHAM: The Festivus 2020 Column Features A Plague For The Rest Of Us
Next Article OWEN: There’s Only One Political Institution Truly Worth Protecting