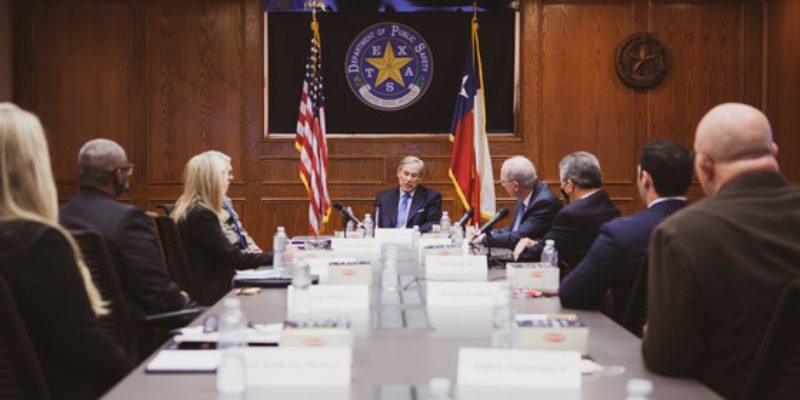 Gov. Greg Abbott on Thursday made good on his promise to cut funding to cities that defund their police departments, emphasizing that the state legislature will pass a bill to ensure police funding and also to implement bail reform.

“Law enforcement officers across the state of Texas put their lives on the line every day to keep Texans safe, … when you consider the magnitude of what [they do] to maintain safety in our communities,” Gov. Abbott, notably upset, said at a public safety roundtable that was live webcast. “Candidly, it is shocking that some cities are turning their backs on our law enforcement officers.”

Referring to the Austin City Council, which voted last year to defund its police department, Abbot said, “What Austin has done is unacceptable and we will make it fiscally impossible for them to continue to defund police.”

Abbott stressed, “In Texas we do not turn our backs on our law enforcement officers. Texas is a law and order state and we are going to ensure that we keep it that way,” pointing his finger to the camera emphatically. “Defunding the police is reckless. It endangers the lives of people in communities across the entire state. We cannot and we will not allow cities like Austin to defund the police.”

Abbott said the state legislature “must pass laws that give cities a clear choice: either fulfill their duty to keep their residents safe or lose access to all of their tax revenue.”

In addition to ensuring that police departments are funded, another legislative priority is bail reform.

In 2017, Abbott introduced the Damon Allen Act, which passed in the House but not the Senate. He wants it to pass both chambers this legislative session.

“Texas has a broken bail system that allows dangerous criminals to go free,” he said.

The bill is named after DPS trooper Damon Allen, who was shot and killed during a traffic stop.

“His accused killer was out on bail when he should have been behind bars,” the governor said.

The governor is working with lawmakers to develop legislation for bail reform. He mentioned three criteria they were going to apply to the court system for judges to follow before setting bail.

Col. Steven McCraw, director of the Texas Department of Public Safety, said it’s not just Damon Allen who was killed because of the state’s failed bail system. Regular citizens are becoming victims of violent crime as well.

Although not at the roundtable, state Rep. Kyle Biederman on Thursday filed the Personal Protection & Safety Act, HB 1238, to address city councils such as Austin’s that have defunded their police departments. He called on Abbott to make Texas “a 2A sanctuary state” in order “for Texans to be able to protect themselves and their families.”