We don’t quite yet have the official numbers from the U.S. Census, though when they come out we aren’t likely going to be surprised to see that Louisiana has lost another 25,000 or more of our citizens on net through outmigration. But in advance of the Census numbers – which have already indicated Louisiana’s population has declined over the past year – we have the annual United Van Lines study, released yesterday, which paints the state as the Sick Man of the South.

United Van Lines today released the company’s 44th Annual National Migration Study, revealing in 2020, Americans continued to move westbound and southbound – and the COVID-19 pandemic factored into and accelerated many of those decisions to move.

According to the study, which tracks the company’s exclusive data for customers’ 2020 state-to-state migration patterns, Idaho was the state with the highest percentage of inbound migration (70%) among states experiencing more than 250 moves* with United Van Lines for the second consecutive year. Topping the list of outbound locations was New Jersey (70% outbound), which has held the spot for the past three years.

United Van Lines also conducts a survey examining the reasons behind Americans’ migration patterns as a companion to the study’s findings. This year’s survey results indicated 40% of Americans who moved did so for a new job or job transfer (down from prior years), and more than one in four (27%) moved to be closer to family (which is significantly up over prior years).

Data from March to October 2020 also revealed the COVID-19 pandemic influenced Americans’ decisions to move. For customers who cited COVID-19 as an influence on their move in 2020, the top reasons associated with COVID-19 were concerns for personal and family health and wellbeing (60%); desires to be closer to family (59%); 57% moved due to changes in employment status or work arrangement (including the ability to work remotely); and 53% desired a lifestyle change or improvement of quality of life.

No, Louisiana is not New York or New Jersey, which are in the middle of not so much an exodus as a pell-mell retreat. The UVL study says Louisiana is almost at par with respect to net migration – though outmigration has a 52.7 percent to 47.3 percent edge over immigration here.

Here are the particulars for Louisiana… 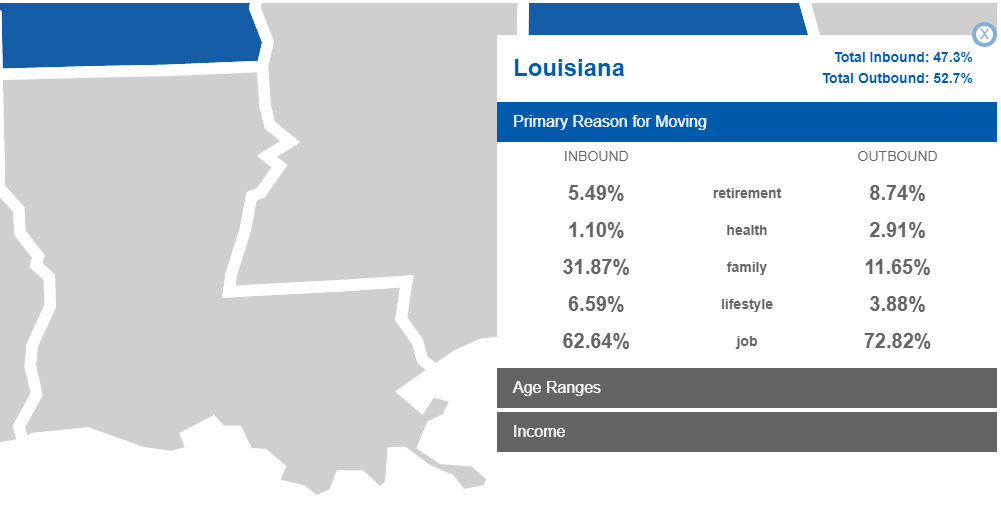 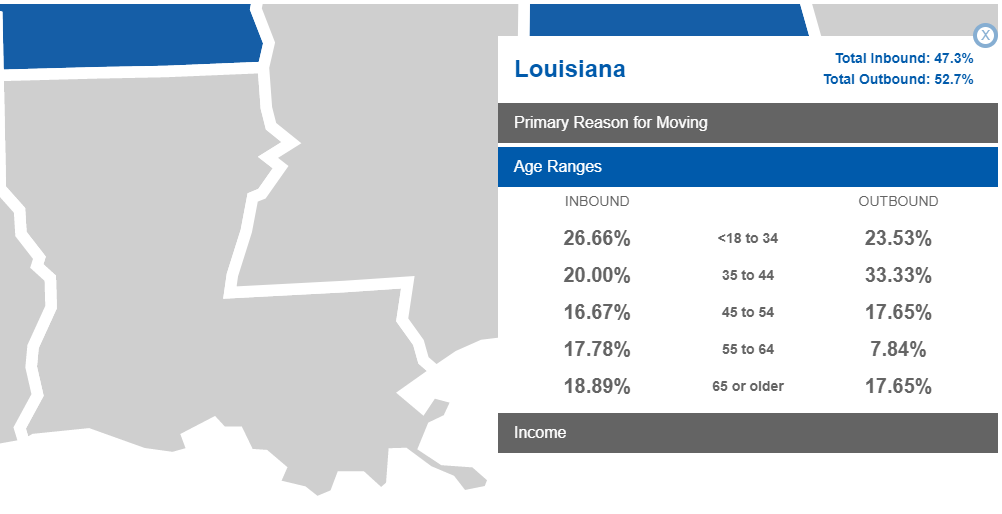 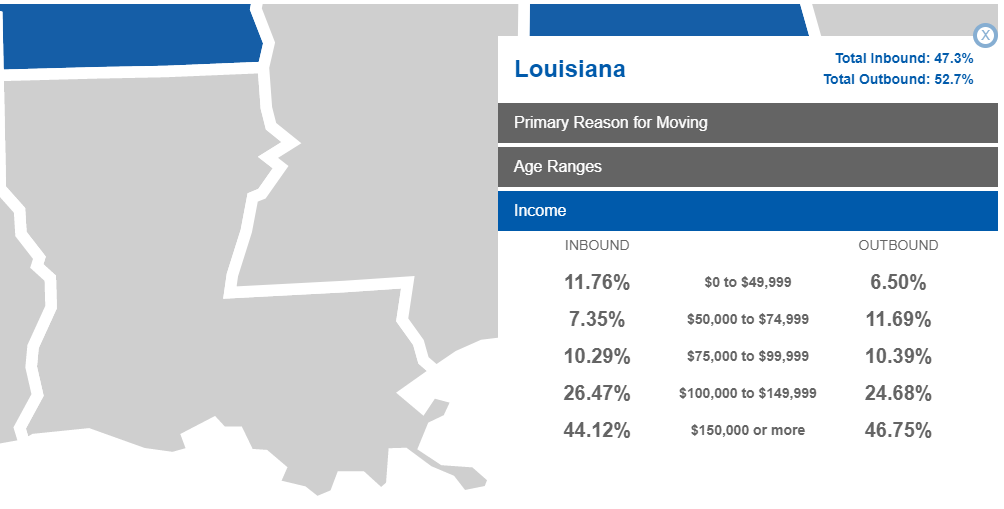 If you’ll notice in the third image, which covers income, the high income people just about balance out. But what’s striking is that the poor, which in this framing includes people whose household income comes to just under 50K a year, are twice as likely to come to Louisiana as to leave. That isn’t good, particularly when the middle class, defined as 50-75K in household income, are almost twice as likely to leave as to come.

Meaning that you’re losing the upwardly mobile professionals and gaining the broke people.

And when the 35-44 age group is 13 percent more likely to leave than to come, you can see it clear as day.

Louisiana is losing its taxpayers. The people in their prime, who haven’t yet started making the big bucks, are going somewhere else to do it.

We’ve called this the Texodus, seeing as though much if not most of this outmigration is to Texas, and we’ve noted that it began when the oil-driven recession started in 2015 and it’s only accelerated since. And it’s going to keep accelerating until there are some major public-policy reforms aimed at attracting jobs and capital here.

The worst of this is that now is the time Louisiana could be attracting jobs, capital and taxpayers in droves. We can say that because all of our neighbors are doing it.

Because people are moving to the South in droves. But Louisiana is missing out. It’s a function of atrocious leadership and a population which refuses to hold that bad leadership accountable.

When the Census numbers put Louisiana’s net outmigration at another 25-30K for 2020, which they will do any day now, it ought to generate alarm bells from Shongaloo to Grand Isle. But it won’t. And that’s sad. This place should be much more than it is.