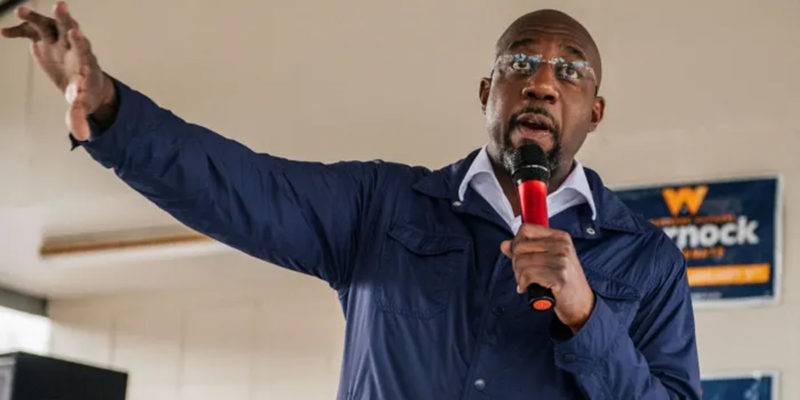 Around 10:00 last night, one of the two Senate runoff races in Georgia was called for Raphael Warnock, the black separatist preacher running as a Democrat, over the Republican incumbent Kelly Loeffler, when Warnock went from being behind by as much as 85,000 votes to magically being up more than 30,000 when predominately black votes in DeKalb County started rolling in at the end of the counting.

That magical wave also wiped out a lead of more than 125,000 for fellow incumbent Republican David Perdue, who almost instantaneously was up by just 3,000 votes when the magical DeKalb dump hit. At this writing that lead was less than 2,000 votes and likely to dissipate altogether.

Georgia is a state which has been trending a bit more blue of late, but it’s still very much a red state if you examine who controls the legislature and the other state offices. There is zero reason to believe there is this statewide trend where Joe Biden, Jon Ossoff and Raphael Warnock are that state’s preferences.

Sorry, but it’s simply not plausible.

Raphael Warnock is the classic nightmare Democrat candidate who says things designed to make himself a hero among blacks and absolutely impossibly unelectable among anybody else. The idea that he would beat Kelly Loeffler, who is admittedly as mediocre and uninspiring a candidate as anyone could run, in a race almost anywhere much less a red state like Georgia, is implausible at best. It simply does not compute, and it screams of election fraud.

Which we already know the state of Georgia is flaccid and incapable of fighting.

So OK. Whether Perdue manages to hang on to a three thousand vote lead or not, we already know that there is no longer such thing as election integrity in America. COVID mail-in ballots and other absurd practices have turned that on its head, and we are now firmly in a post-republic where the rule of law doesn’t prevail.

The answer is, who knows?

A post-republic is something that has been tried lots of times going back thousands of years. Greece had many different republics, and they all collapsed, and so did Greece. Rome’s post-republic consisted of demagogues competing for money, land and military recruits they could use to control the empire through brute force.

Nazi Germany was a post-republic. So was Cuba and Venezuela. So was Chile, helicopter rides and all.

You’ll hear that Trump screwed things up for Perdue and Loeffler. That isn’t exactly wrong – the speech Trump gave at the rally for them yesterday was a mess. It did more harm than good. But if you really think that mattered you’re not paying attention.

No honest election campaign in Georgia produces Raphael Warnock as a winner. Period. There is no longer any reason to take American elections seriously without massive reform our political class doesn’t appear capable of.

Which means it’s time to stock up on all the essentials, including ammunition. And best of luck to you.