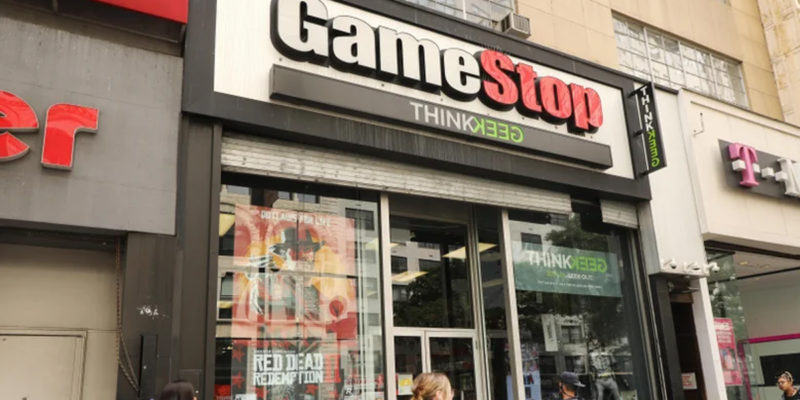 If you haven’t been paying attention, you’ve missed a major, hugely significant cultural phenomenon and populist shift taking place in a critical economic sector that we think is a sign of things to come. At issue is the stock price of GameStop, the video game retail franchise.

Four months ago, GameStop stock was trading at $6. Then a hedge fund, Melvin Capital, decided to run a short on the stock, something hedge funds do all the time for fun and profit with real victims on the other end.

But on Reddit, within a forum called WallStreetBets, an army of individual investors got together and decided to fight back against the hedge fund vultures at Melvin Capital by buying up every share of GameStop they could. Rather than tank due to Melvin Capital’s short, the company’s stock exploded, going from $6 to more than $300. This morning it traded as high as $514.50 before dropping below $250, then jumped back over $400.

Stock apps and services like Robinhood and TD Ameritrade have halted trading of GameStop as a result of the “volatility,” which is BS. The real issue is that Melvin Capital took a hit of more than 30 percent of its net worth and needed a bailout by its competitors to stave off bankruptcy after what the Redditors did to it.

You can bet there will be lots of talk about government intervention to prevent anything like this from ever happening again. But it isn’t just GameStop. TD Ameritrade and Robinhood have also halted trading of Bed, Bath and Beyond, AMC Theaters, and Nokia as well in response to similar populist rallies.

Why is this such a big deal? Because of what it portends.

If individual investors can band together on forums like Reddit’s WallStreetBets and destroy elite hedge fund oligarchs like Melvin Capital, think of what else can happen.

Remember, hedge fund oligarchs go on Bloomberg and CNBC and Fox Business all the time and proceed to trash stocks of companies they’re shorting. It’s an entirely greasy, dishonest and destructive practice that nobody has ever tried to stop. Individual investors get hit all the time when the stocks they own tank as a result of these practices.

This has gone on for a very long time. Here’s Jim Cramer admitting it all the way back in 2006…

Except all of this has now ground to a halt, because as Melvin Capital just found out the market manipulation by hedge fund oligarchs which has gone on for decades out in the open can now be countered, and then some, by a populist army of small investors gleefully feeding on their carcasses after a big kill of their choosing.

What this does for the stock market is incredibly healthy, though you can bet your bottom dollar the Wall Street elite will demand in the strongest terms that the SEC and the financial markets step in to put a stop to any future GameStop-style rallies. How to do that is a question, though – if you ban individual day trading you will almost certainly lose in court, and even if you’re successful all you’ll do is create secondary markets for stocks away from NYSE and NASDAQ, perhaps offshore, where things might go even more haywire.

Institutional stock manipulation has been a malady bedeviling American capitalism for a long time, and there has been no adequate public policy response to it. Mainstream politics is awash in Wall Street money, and therefore the political establishment has been paid off to turn the other cheek while the oligarchs rip off the little guy, and the Left has no interest in playing the role of a reformer because they want to break that system rather than improve it – which is the difference between today’s socialist nutters and yesterday’s egghead liberals.

So now the market is correcting itself courtesy of hundreds of thousands, or even millions, of small investors banding together to stick it to the hedge funds. Over time, GameStop’s stock is going to go back to $6, or maybe less. Perhaps Melvin Capital’s short was the correct move in the long run. But because that populist investor army pulled off the rally they did this week, that short cost Melvin Capital some $3 billion in its own equity, and that means hedge fund shorts will forevermore carry an untenable amount of risk.

The game has changed. It’s even thinkable now, when it wasn’t just a few days ago, that people might actually buy stocks looking for a quarterly dividend rather than a successful bet that the price might go up. Boy, wouldn’t that be a sea change.

But the implications of this go beyond the stock market. We’ve been saying for a while that this is now the post-republic phase of American history. Our elites have broken our institutions, and anything goes. Our elections no longer have integrity, our schools indoctrinate kids into abjectly false ideologies, our entertainment institutions hector us about racism and sexism rather than entertaining, our news media tells us bald-faced lies. Our stock markets, which trade companies providing goods and services, are manipulated by elitists with far more money than talent or goodwill. Our arts community no longer produces anything beautiful. Our music industry gives us Cardi B and Billie Eilish.

And our political class pays off the interests of George Soros and Mark Zuckerberg, Sergey Brin and the Chinese at the expense of our wallets and our liberties.

The Donald Trump and Bernie Sanders phenomena are related. Trump’s 75 million voters recognize the filth and rot in our institutions and want to fix it by returning to traditional America. Sanders’ fans want to fix it by breaking everything apart in the mistaken belief that you can write Denmark – or a fictionalized version of Denmark which actually ends up as Venezuela – large. But both see that our elites are failures and are ready to hang them high.

The answers won’t come from inside those institutions. Our elites are far too corrupted to fix themselves, and in fact they will dig in even deeper as they perceive the threat from the unwashed masses with their torches and pitchforks.

But what’s beautiful about America, and about American capitalism, is its penchant for creative destruction and disruption of industries.

There will be streaming services which will finish off Hollywood. They’re coming, and so is the content to fill them.

There will be social media apps that will destroy Facebook and Twitter. You can’t kill all the Parlers that will come. More, including one with a far superior business model and ethic, will take Parler’s place. Public education, and higher education, are busy destroying themselves. And on and on.

In four years all of these institutions will be irreparably disrupted, and we’ll be well on our way to moving beyond them.

The Left, and America’s elites are fully invested in the Left now, destroys everything it touches. Except people don’t hold on to things which have been destroyed. They set them aside. Why do you think our cities are emptying out? Why do you think Hollywood is incapable of making hit movies anymore?

GameStop is only the beginning. Those magnificent bastards on Reddit have stormed the gate. The wave to come will now follow.