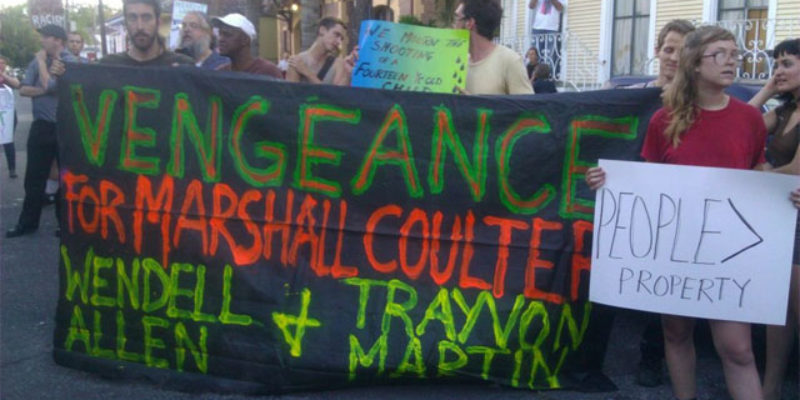 It wasn’t enough to tear the city of New Orleans apart eight years ago over a would-be burglar justifiably shot by a homeowner. Now the criminals running that city into the ground apparently think it’s a good idea to drag the Big Easy through the Merritt Landry nightmare all over again.

Remember Merritt Landry? His case was a big deal in 2013. Then-District Attorney Leon Cannizzaro played to the voting base and attempted to grossly overcharge Landry, a homeowner in the Marigny district of New Orleans, with attempted second-degree murder of a then-14 year old hoodlum named Marshall Coulter who, at 2 a.m. on a Friday night, scaled a six-foot spiked fence into Landry’s side yard, spooking his dog. Landry got his gun and confronted Coulter, who made a move Landry believed was the kid going for his gun. Landry shot Coulter, putting a hole in his head but not killing him.

The grand jury refused an indictment of Landry, and Cannizzaro quietly retreated from the case, realizing he had milked all the positive publicity from the case that he could.

Well, that was then. Things are different now. Cannizzaro isn’t the DA anymore; Criminals’ Best Pal Jason Williams is.

And Marshall Coulter isn’t an active burglar with a hole in his head. He has expired. That actually happened 11 months ago, but Williams took office on Monday.

Which means this whole mess is reportedly going to be dredged back up.

WDSU recently learned Coulter died in February at age 21. The New Orleans Police Department and the Orleans Parish coroner have both classified the death as a homicide in connection to the Mandeville Street shooting on July 26, 2013.

A coroner’s spokesperson said Coulter’s death on Feb. 27 was caused by “complications of sinusitis and remote gunshot wound of the head,” along with “bacterial meningoencephalitis with subdural empyema.”

“The difference in this case is … he has died, and the coroner has said he died because of that shooting incident. So … they’re not presenting attempted murder anymore. They’re presenting a homicide — a murder — to the grand jury based on this homeowner’s actions.”

WDSU left a message for Landry Tuesday but was unable to reach him.

WDSU recently learned about Coulter’s death after NOPD turned over its 2020 homicide list in response to a public records request. The records list the case status as “cleared by arrest” – a reference to Landry’s 2013 arrest.

On just his second day in office, Williams was not available to answer questions about the case.

You would have thought Williams would have his spokesman put out a statement saying that’s an old case and one a grand jury disposed of, and he’s got too much to do to tilt at that windmill. Takes six seconds to put that out.

But he didn’t do it. And Jason Williams has had two months of a transition, during which the subject of Marshall Coulter’s death in February of last year had to have come up. Which would suggest to us that WDSU isn’t all wet bringing this back out last night. We would guess somebody at the station even caught a tip about it.

Don’t forget that the coroner, Dwight McKenna, is also the publisher of the left-wing rag the New Orleans Tribune, which just made LaToya Cantrell its 2020 Person of the Year. McKenna, like Williams, has a problem with federal prosecutors and tax evasion; he was convicted and spent nine months in jail on those charges in the 1990’s when he’d been a member of the Orleans Parish School Board.

If it should turn out that these two guys combine to persecute Merritt Landry, who simply protected his property and his then-pregnant wife and young child from a burglar who had jumped his fence at 2 in the morning, over something everyone thought was over and done with seven years ago, one would imagine that’s going to be the end of anybody wanting to buy property in New Orleans ever again. Why even bother, if the criminals literally run the place?