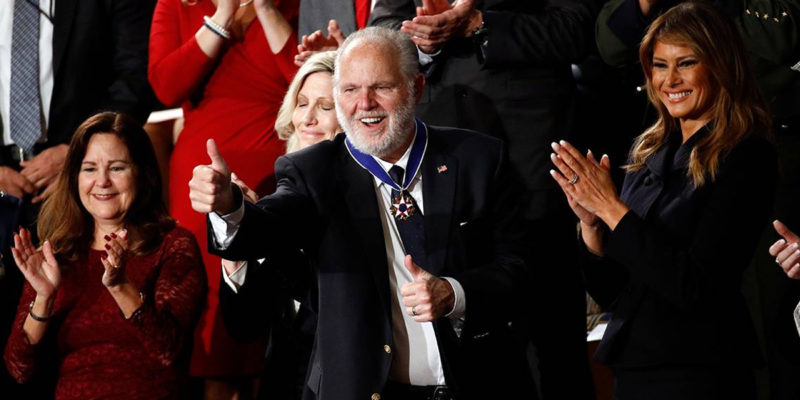 Despite what his critics have claimed in the wake of his passing, the legacy of Rush Limbaugh is really not complicated at all.

Over 32 years, he reached millions of Americans daily and, by merely reminding his vast audience of the unique nature of America’s miraculous founding, he created a solid, permanent, conservative movement in this country.  They trusted him to be their constant, their anchor in an increasingly putrid cultural cesspool.  He, in turn, empowered them with the truth and they never left him because he never left them.

Some of his detractors this week have referred to Rush’s legacy as “controversial” or “divisive” or that his rhetoric was “harsh.”  Only to the Left, which was not nearly as offended by his manner as it was by his message.

However, to the great Silent Majority in this country, he was positively and powerfully enlightening.  Using simple but compelling word pictures, he articulated daily what traditional American values really are.  His substantial but succinctly stated commentary created the opportunity for millions of Americans to listen, learn, and ultimately come to the conclusion that “I’m a conservative.”  It’s hypocritical to hear the Left describe Rush as having “dog-whistled” various “dark” messages to conservatives.  All the while, of course, the harsh daily mocking of conservatives from the tabloid media on the Left is never condemned.

What is some of this “negative” commentary Rush offered? That it is Ok to love America; to believe that America, while not perfect, is truly exceptional and truly the “last best hope of man on earth;” that it is perfectly acceptable and logical to put “America First;” that it’s perfectly acceptable and legitimate to be unapologetically pro-family, pro-life and pro-2nd Amendment.

He made clear that it’s not only acceptable but completely accurate to believe that our free market economy has lifted millions out of poverty and is the envy of the world; to believe that a strong national defense, lower taxes, less regulation, limited government and religious freedom are, demonstrably, the best national policy; that it’s Ok to expect legal immigrants to learn our language and assimilate into our culture and to expect illegal aliens to be kept out of our country; to recognize that much of our public education system has failed abysmally and that our children are not being educated at all but, rather, indoctrinated in Marxist thought.

He was one of the first to notice and then call out the Cancel Culture that, fueled by the unfettered power of a social media sector that enormously benefits from (and abuses) federal law—as well as the national tabloid media, had arisen like a virus to stamp out conservative speech.  He was also one of the first to note the treacherous effect on our constitutional republic of a massive, permanent, liberal federal bureaucracy we now know as the “Deep State.”

Rush Limbaugh was truly a lion who roared, and his voice and message will continue to ring out long after his death by providing a political and historical roadmap in our quest to preserve America’s liberty and greatness.

Interested in more national news? We've got you covered! See More National News
Previous Article Nancy Pelosi Is Stuck On Stupid, So Of Course Russel Honore Now Runs Capitol Security
Next Article CROUERE: The End Is Near For COVID Hysteria