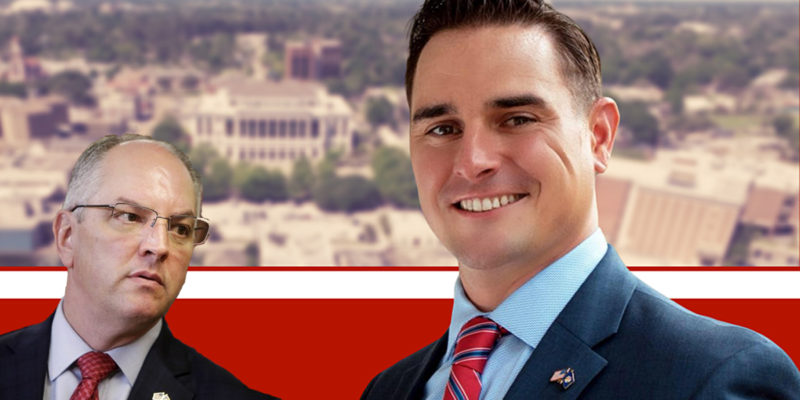 One of the things we’ve been watching, particularly since he squeaked out a 40,000-vote win over Eddie Rispone in 2019, has been how various areas of the state would react to John Bel Edwards’ second term as governor of Louisiana. History tells us that Louisiana governors invariably wear out their welcome with the people of the state and become stale on their way to toxic, because so few of them actually succeed in office.

And failure, even in a place like Louisiana which holds its politicians to a pretty low standard, simply doesn’t sell.

Kathleen Blanco went toxic. So did Bobby Jindal. Edwin Edwards went toxic twice. Buddy Roemer certainly did. Dave Treen wasn’t so much toxic as irrelevant, but his approval rating certainly took a dive over the course of the four years he was in office. And so on. Even Mike Foster, arguably the most successful of the bunch, largely gave up being governor during his second term and decided to attend Southern Law School while in office; he’d done pretty much all he could and didn’t care anymore.

And it’s never the whole state who turns on these people at once. It starts somewhere.

With Blanco, obviously, it was the New Orleans area where people were horrified at her incompetence dealing with Hurricane Katrina. With Jindal, it was Baton Rouge, where the perception he had neglected LSU and he’d “gutted” state government had taken hold.

But with Edwards, who hasn’t quite gone toxic around the state yet though why it hasn’t happened is a bit of a mystery, it’s the Acadiana area.

Let’s remember, these people weren’t big John Bel Edwards fans in the first place. In 2019, Rispone trashed Edwards 60-40 in Lafayette Parish. The surrounding parishes were as bad or worse. In Acadia Parish it was 72-28 for Rispone. In St. Martin, 61-39. In Iberia, 62-38. Rispone beat Edwards 64-36 in Jefferson Davis. It was a 75-25 blowout in Vermilion. Only in St. Landry, whose demographics are largely the reverse of the rest of the area, did Edwards hold his own; he got 52 percent of the vote there.

Why? Because the Lafayette area is the heart of Louisiana’s oil and gas industry and besides the fact they’re overwhelmingly Republican voters in Acadiana, they actually want to keep producing oil and gas. They’ve known for a long time that Edwards is himself a trial lawyer and that he’s in league with trial lawyers engaged in assaulting oil and gas and essentially driving it out of the state.

And by the way, that isn’t getting better now that Joe Biden is president and Biden is busy attempting to drive oil and gas out of the whole country with his punitive executive orders shutting down leases for oil and gas drilling on federal lands and seabeds, and shutting down oil pipeline construction like the Keystone XL. Edwards has done absolutely nothing significant or effective to soften this problem and only made a halfhearted effort toward signaling that he cared the other day…

“I know he’s arguing. He’s working it every day. He’s constantly calling me looking for new ammunition” to make his case to the Biden administration, Harris says.

Nobody in Acadiana is impressed by that.

Here’s what else they’re not impressed by: Edwards’ never-ending mask mandates and COVID restrictions. We already know those have been wholly ineffective at stopping or even slowing the spread of the virus. It’s a coronavirus, it gets everywhere and we’re all going to be exposed to it no matter how draconian his attacks on our economy might be. We have a year’s worth of experience with this thing and it’s inarguable that the only way to bring Louisiana’s economy and quality of life back to normal is through herd immunity and vaccinations.

People in Acadiana were smart enough to know this. So when, a couple of weeks ago, a measure was brought in front of the Lafayette Parish Council to have a local mask mandate, people lined up to speak against it. Here were a couple of the better ones…

Those voices, among others, carried the day and the measure was defeated by a 3-2 vote of the council.

That led to Edwards scolding Lafayette in his usual style, pretending that his approach is the only responsible one without the slightest acknowledgement that his results are poor. He attacked the city on a Zoom call with the Washington Post, calling the failure to enact a local mask mandate a “basic failure of leadership.”

Well, if there was any tolerance of John Bel Edwards left in Lafayette, that went out the door once the locals got word about his Zoom call.

Josh Guillory, Lafayette’s mayor-president, unloaded on the governor Saturday with a statement so hot it could have burned down the governor’s mansion…

It is deeply hypocritical for Governor John Bel Edwards to attack Lafayette in the national media, criticizing our City Council for recognizing the challenges and cost involved in enforcing a local mask mandate. Where is the Governor’s enforcement of his mask mandate? The State Fire Marshal reports to him. ATC reports to him. How many citations have they written for the nearly 4,000 complaints they have received? Zero.

The real failure of leadership is immediately evident in Governor Edwards’ decision to use his “mask mandate” as a partisan weapon, rather than actually enforce it. How much of the $1.9 billion provided to the State by the Federal Government for COVID-19 response has been dedicated to enforcement of his mandate? Why does he expect local governments, yet again, to bear the cost of state mandates?

If the Governor wants to use the national media to audition for a job in Washington DC, he might want to make sure his own house is in order first.

Of course, Guillory hit the nail on the head where Edwards is concerned, because the governor has been seeking to be appointed to something in Biden’s administration ever since the suspect presidential election was concluded on November 3 of last year. So far, the administration won’t bite on Edwards, but hope springs eternal. We’ve been told that Edwards’ staffers had all but packed up the fourth floor of the state capitol building where the governor’s office is, and yet so far he hasn’t been offered a job in the administration.

So when Guillory brings that subject up, you can bet it’s a swift kick in the nether regions.

And it’s a truth-missile for another reason, which is that the state can’t or won’t do much of anything to impose those restrictions and mandates. Just look at the Firehouse BBQ case in Livingston Parish – that restaurant refused to follow Edwards’ COVID restrictions, the local officials refused to do anything to enforce them, and they never did close. There are a lot of Firehouse BBQ’s around the state, but everybody involved is nice and quiet about the fact they’re flouting Edwards’ dictates.

Edwards should have left well enough alone and not insulted Guillory and the council for following the will of the people in Lafayette Parish. Nobody is stopping the vulnerable and the timid from wearing masks. They can even wear two or three masks if they want, though nobody has bothered to explain why if masks actually worked it would be necessary to wear more than one. But given the governor’s own performance with respect to COVID and the scorched-earth effect he’s had on the state’s economy while failing to stop the spread of the virus, a comeuppance like Guillory gave him was a long time coming.

We’re pretty sure this is the start of Edwards’ decline in popularity. We’ve never bought into the idea the people of Louisiana actually liked him in the first place – they’ve tolerated him more than they’ve liked him – and what support he has is an inch thick. A black eye like this has the potential to become a whole face full of bruises, particularly if he makes the mistake of continuing to punch down on local officials in front of the national media.