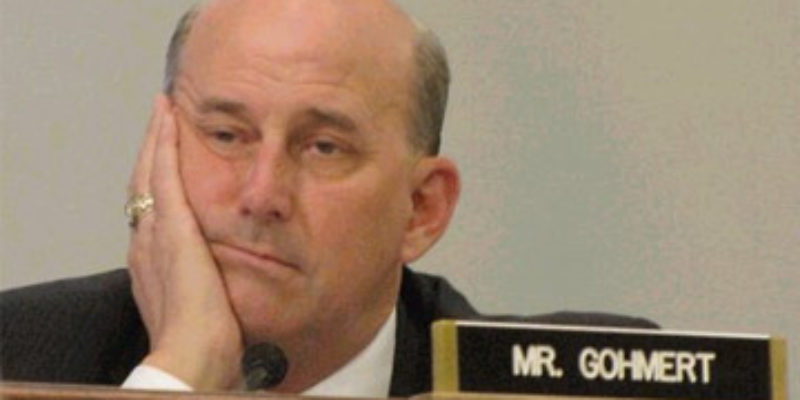 After Democratic Speaker Nancy Pelosi called her colleagues security threats, Congressional members are now being fined for not submitting to metal detector scans outside the House chamber.

A visit to another chamber — e.g. a House restroom just outside the boundary set up by the metal detectors — can now result in a penalty of up to $10,000 under rushed security rules.

Conservative Republican U.S. Rep. Louie Gohmert of Texas tore into his Democratic colleagues last week for the impromptu security procedures that fined him $5,000 for a bathroom break, even after he had already once submitted to a security check earlier that day.

Gohmert and fellow Congressman Andrew Clyde of Georgia were each fined $5k for circumnavigating metal detectors outside the House chamber. Acting House Sergeant-at-Arms Timothy Blodgett issued the fines, according to FOX News, following violations that occurred Thursday — the first since the House started making all Representatives pass through magnetometers.

Article 1, Section 6 of the U.S. Constitution prohibits Members of Congress from being detained on the way to or from a session of the House, Gohmert pointed out. Therefore, Gohmert called the new rules “unconstitutional” stunts designed by Democratic leadership to answer the Jan. 6 demonstrations and trespasses at the Capitol and in order to “demonize” opponents.

“I explained to the Capitol Police officer that I had never been required to be screened again from the restroom immediately by the House floor since the metal detectors had been in place at the other doors,” Gohmert said. “I said they had witnessed me walk the few feet to the men’s room, enter and take the few steps back. No one ever mentioned or made that a requirement until yesterday [Thursday].

“Unlike in the movie ‘The Godfather,’ there are no toilets with tanks where one could hide a gun, so my reentry onto the House floor should have been a non-issue,” he said.

Under the Democrats’ guidelines, lawmakers are fined $5,000 for a first offense and $10,000 for a second offense. Fines cannot be paid with campaign or office budget funds, and are docked from paychecks. Gohmert said he will appeal.

On Friday evening, Speaker Pelosi herself was accused of entering the House chamber without passing through the metal detectors. Republican Reps. Rodney Davis and Barry Loudermilk each called on Blodgett to assess Pelosi $5,000, but it was unclear whether the Speaker would be fined.

Bonus: Here’s the scene from “The Godfather” mentioned by Gohmert (warning: graphic content):