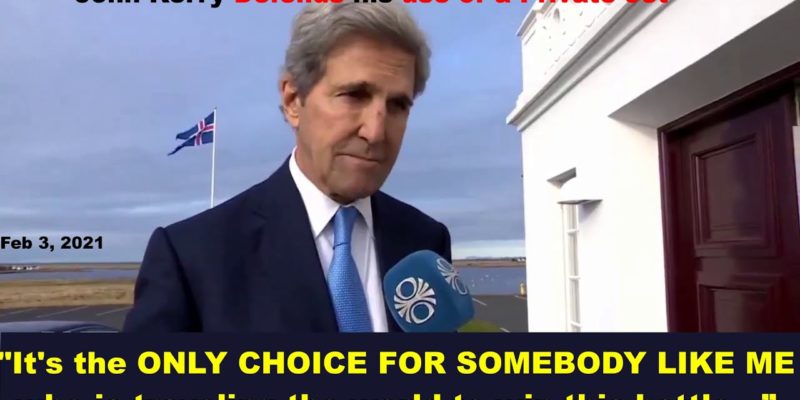 In the latest edition of the #YouFirst campaign, we tackle the hypocrisy of Biden’s Climate Czar John Kerry and his lavish choice of travel. But I guess, before we dig into the hypocrisy, we should note that for someone like Mr. Kerry it “is the only choice” – his words, not ours.

Did you catch this when he said it?

When confronted on the matter by Icelandic reporter Jóhann Bjarni Kolbeinsson, Kerry appealed to offsetting his carbon output and highlighted the other environmental efforts he has made in years past — including the negotiation of the Paris Accords, which President Biden rejoined upon taking office.

“I’ve been involved with this fight for years. I negotiated with President Xi to bring President Xi to the table so we could get Paris. And, I believe, the time it takes me to get somewhere, I can’t sail across the ocean,” he said.

“I have to fly, meet with people, and get things done,” Kerry said, failing to explain why he opted for a private jet over a commercial flight, as private jets emit an estimated 40 times more carbon per passenger. However, Kerry maintained that his nearly “full time” efforts are “working to win the battle” on climate change.

“I offset and contribute my life to do this, I’m not going to be put on the defensive,” he added. Kerry did not immediately explain how he offsets his emissions or plans to do so.

According to RUV, the chair of the Arctic Circle Round Table said Kerry received the 2019 prize for remaining a consistent advocate for climate-related matters, but he “also criticized Kerry for coming to Iceland for the assembly on a private jet.”

Kerry still owns a private jet via a family company, and, according to Fox, “flight logs indicated that his family’s private jet spent over 20 hours in the air over the past year — culminating in an estimated 116 metric tons of carbon emissions.”

The former Secretary of State said in a BBC interview last week that people only have nine years to save the planet from the supposed anthropogenic impact on the climate.

“Three years ago, we were told we have 12 years to avoid those consequences,” Kerry said. “Three of those years were lost because we had Donald Trump, who didn’t believe in any of it. And now we have nine years left to try to do what science is telling us we need to do.”

Rules for thee, but not for me.

There is no other way to put it. The entire administration is full of hypocrisy and the #YouFirst campaign is bringing to light their audacity. The first #YouFirst video exposed President Biden’s outright lie about shutting down oil and gas and his ludicrous race to net zero GHG as he travels around on Air Force One and an extensive motorcade. Now, the #YouFirst guys have partnered with MAGA Louisiana to make sure Czar Kerry is put on notice. Check it out and have a good laugh… and then as we here in south Louisiana thaw out from record breaking cold temps think about what your life would be like without energy. Not a pleasant thought, friends.