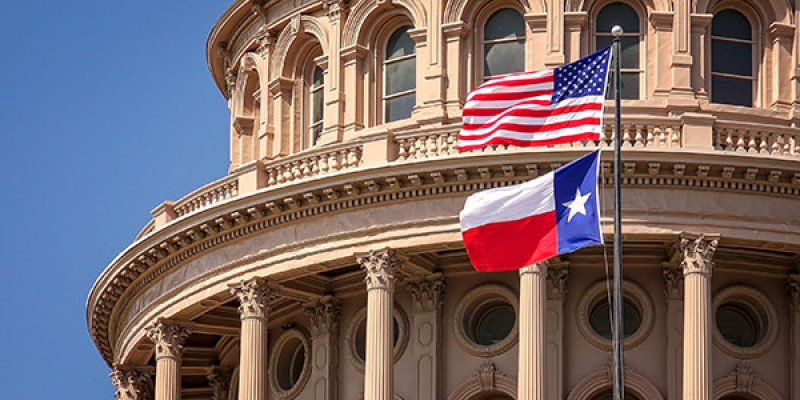 At issue is a policy implemented by Patrick, who leads the Senate, to require anyone seeking access to the Senate gallery to prove they do not have the coronavirus by receiving a negative test result prior to entry and then wearing a wristband indicating they are cleared for access.

Senate Resolution 1, which was passed unanimously by the Republican-majority Senate, requires all members of the public to have a wristband to demonstrate a negative COVID-19 test to enter the Senate gallery or a committee hearing.

Tents have been set up outside of the capitol’s north entrance to facilitate tests. Prior to being tested, individuals are required to fill out paperwork. Once testing negative, they are given a purple wristband that is only valid for that day.

Miller and other statewide representatives must wear a wristband daily to enter the Senate floor or attend a committee hearing, requiring them to be tested daily and provide a daily negative test in order to obtain a wristband and gain access to the Senate.

On March 2, Hotze attempted to enter the gallery of the Senate and was told by Deleon that because he was not wearing a wristband, he was denied access. In order to receive access, he was directed to go to the tent outside to be tested. Even individuals who have been vaccinated are not permitted entry without first being tested, Deleon told Hotze, according to the complaint.

Because he refused to be tested, Hotze was denied access twice, once to the Senate gallery and once to a Senate committee room.

Hotze then went to the state House where he was allowed to enter the gallery and any committee hearing without having to submit to a COVID-19 test. He and others can also freely access the public areas of the Capitol without having to take a test.

Hotze, who has sued Gov. Greg Abbott and others over coronavirus-related regulations and mandates, desires to testify in numerous Senate hearings related to issues pertaining to his and others’ lawsuits. He also desires to watch Senate debates from the gallery, as is his right as a Texas resident and citizen, he argues.

The Senate also refuses to allow Hotze and others to testify via Zoom or any other digital platform. Miller can only represent the state Department of Agriculture in person at the Senate if he submits to the purple wristband policy.

“Lt. Gov. Dan Patrick is leading an unconstitutional effort to shut down access to the people’s access to their government,” Jared Woodfill, their attorney, told The Center Square. “A medical procedure has never been required to access one’s government. Here, the situation is more egregious when you consider that the Texas House and public areas of the Capitol do not require one to undergo a COVID test prior to entering the respective areas. Gov. Abbott is opening up businesses while Patrick is shutting down the people’s access to their government.”

The plaintiffs provided the Texas Attorney General notice of the lawsuit, which was filed in Travis County.

“The Texas Constitution prohibits laws that abridge the freedom of speech or the right of the people to petition the government for a redress of grievances,” the complaint states.

“Because Patrick’s SR 1 requires a daily medical test as a prerequisite to participate in legislative matters related to the Texas Senate during the 87th Legislative Session, the requirement violates Article III, Section 16, and Sections 8 and 27 of Article 1 of the Texas Constitution,” the complaint states, as well as the Texas Open Meetings Act.

Patrick disagrees. He told the Houston Chronicle that the resolution unanimously approved by the Republican majority Senate should be expanded to the entire Capitol.

The complaint states that the Texas Constitution requires the legislative session to be open, which “supersedes any statutory emergency authority that may otherwise apply to the Senate. The Senate is not ‘open’ or ‘accessible’ in that SR1 requires plaintiffs and all Texans to submit to the COVID-19 medical procedure as a prerequisite to participating in their government as it relates to the Texas Senate. Accordingly, SR1 violates … the Texas Constitution in that the Senate is closed to those who refuse to submit to the COVID-19 medical procedure.”