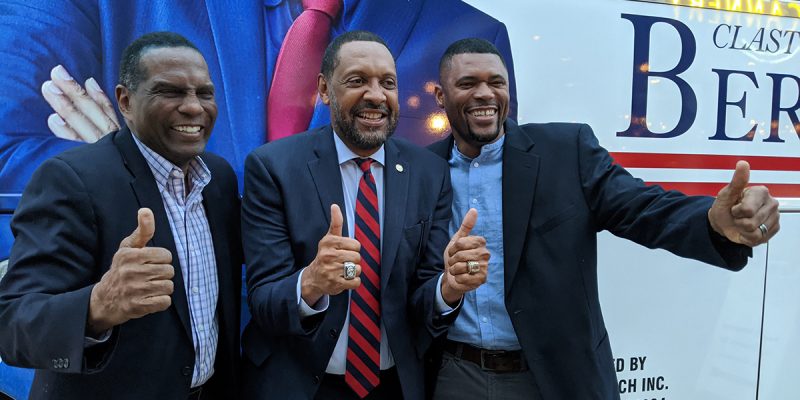 On March 20th Louisiana will hold two special elections for Congress, in the north-central 5th District seat that had been won by the late Luke Letlow in the December 2020 runoff and the 2nd District seat that runs from north Baton Rouge along the Mississippi River to the lower Ninth Ward of New Orleans and was vacated when then-US Representative Cedric Richmond took a position in the Biden White House.

Jamaican-immigrant and LSU athlete Claston Bernard is one of fifteen candidates who qualified to run in the predominantly black district.

The Republican congressional candidate took some time off of his hectic campaign schedule to field some questions for The Hayride.

MB:  My first question is why are you running for Congress?

CB: Because we need a change. We have politicians who like to make all kinds of promises, engage in virtue signaling and photo ops.  And they’ve been doing this for years and years.  And it’s not working (for the people of the Second District).  I tell this story frequently.  In 2005 I was volunteering with the Red Cross at the Centroplex after (Hurricane) Katrina and there was a gentleman they found who was HIV + and he had given up hope and was ready to die.  That’s where he was. And that was in 2005.  And now we are in 2021 and we have a district that is the fourth worst district in the country in terms of quality of life.  We have a city (New Orleans) that is the second worst major city in America to live in and yet the man who represented this district is being promoted to work in the highest office in the land.

MB:  What year did you come to the United States?

MB:   Now the Second Congressional District has only elected one Republican to represent it in the past one hundred years, former Congressman Joseph Cao.  Is he supporting your candidacy?

MB:  Who would you say is the biggest challenge in this race?

CB:  It’s not a matter of who but what.  The biggest challenge I face is raising awareness about my candidacy and raising money.  The people, they want a change.  They want a champion.  They like my life story, they like my work habits but the message just needs to get out there.  We need someone who is actually going to work and not someone who is just going to photo op and deliver empty promises.

MB:  This district is sprawling area with the state’s two largest cities, New Orleans and Baton Rouge.  Do you believe you would be able to effectively represent two very different metro areas?

CB:  I did the decathlon.  It has ten events.  When you do the decathlon, you are considered one of the world’s greatest athletes.  That’s the mentality that I am taking to this district because that is what it’s going to take to balance that.

MB:  What would you say is the one thing that truly distinguishes your candidacy from the others in the race?

CB:  I have a proven track record of getting things done, whether in athletics, writing books, or running my business (building inspection company), or taking care of my family.

MB:  Though the district is overwhelming Democratic, you are not the only Republican in the field. Do you see their presence hindering your candidacy?

CB:  It’d be nice if everyone would get behind one candidate.  But as an athlete I’ve learned to stay in my lane.

MB:  What is your position on the major social issues?

MB:  As this is a special election with a short window of activity how many parishes in your district have you campaigned in?

CB:  I’ve run through most of them with my campaign bus, stopping and talking with people.  But the focus right now has been to get my name known in New Orleans because one of the biggest things for Republicans is leaving footprints behind in majority black areas.  I was in the Seventh Ward recently and this guy asked, “Why should we trust you?”  All the politicians comes through here and they just talk the same thing over and over.  Let me tell you, they’re angry.  They’re not angry at me but they are angry at being played.  That’s the situation they are in over and they want someone who is going to actually champion them and boost them.  Someone who is going to stand up.  For me I look at it from that perspective.

MB:  Beyond former Congressman Cao, what are some of the other big endorsements you’ve received?

MB:  What is the number one issue in this district and your number one priority to tackling if elected?

CB: It’s almost two-fold really, education and family.  Education is the best tool to get out of poverty.  When you look at Justice Clarence Thomas, it was education that put him on the US Supreme Court.  Look at Dr. Ben Carson.  It was education that led him to become one of the best neurosurgeons in the world.  As for myself, despite all of these athletic accomplishments, it was the investment in education that got me to the school that I ended up in Jamaica.

MB:  Have you received much support from high profile African-American Republicans?

MB:  Let’s just say you were to be in a runoff with former State Democratic Party Chairwoman Karen Carter Peterson.  What would you say is the defining difference between you and Senator Peterson?

CB:  I am not an establishment guy.  I’m there to get results.

MB:  You distinguished yourself as a champion athlete “under the stately oaks” of LSU.  In what field did you earn your degree?

MB:  Sticking with LSU, what were your athletic accomplishments at LSU?

CB:  Four-time SEC champion and NCAA champion in decathlon.  I was also a two-time Olympian for Jamaica in 2000 and 2004.

MB:  What other endeavors outside of politics and sports have you pursued?

MB:  Why are you committed to serving the people of Louisiana in Congress?

CB:  I want people to know that Louisiana made me a champion.  They offered me an opportunity to achieve that.  I want to channel that energy now to helping Louisianans move from where they are.  Most people can tell you what the problems are but you need someone who is willing to work to resolve them.  And for me that’s what I am taking to this race.

MB:  Rather than kicking off your campaign in either of the two population centers of the district, you launched your candidacy in Donaldsonville.  Why there?

MB:  Last question.  You’re no doubt familiar with the concept of the “elevator sales pitch”.  You have sixty seconds to sell someone on your candidacy.  What’s your pitch?

CB:  My name is Claston Bernard.  I’m a two time Olympian, an NCAA champion, I’m an author.  And Louisiana made me a champion and I want to be their champion in Washington, DC.