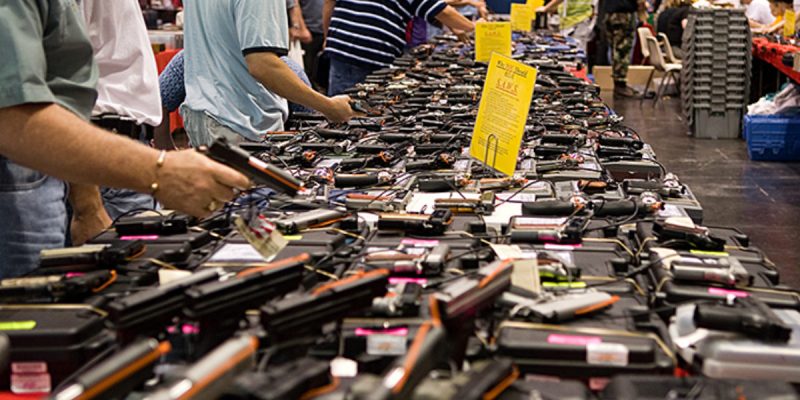 The Biden administration and Congressional Democrats are moving quickly to fulfill their goal of restricting access to firearms.

A bill intended to close the so-called “gun show loophole” passed the U.S. House of Representatives in 2019 to much fanfare but with little actual chances of becoming law with a Republican Senate and a Republican-controlled White House standing guard.

Now that the White House and the Senate are in Democratic hands, the same effort to enact mandatory background checks has joined a recent gun control sweepstakes on Capitol Hill.

From over-broad statements such as U.S. Rep. Sheila Jackson Lee’s mandatory registration bill that would make gun ownership impossible for half of all Americans, to more conciliatory efforts, 2019’s “Bipartisan Background Checks Act” is making a comeback under the dome. But it’s not looking more bipartisan than last time it was introduced, nor has it been toned down.

While Jackson Lee’s bill is getting most of the attention from gun rights activists, California U.S. Rep. Mike Thompson’s Bipartisan Background Checks Act of 2021 (again assigned the bill number H.R. 8) is moving along quietly and at a fast clip. Though recently introduced, the bill already has 131 cosponsors and has been referred to the House Judiciary committee.

Thompson, chairman of the House Gun Violence Prevention Task Force, is banking on the support of three Republicans as validation of the bill’s “bipartisan” title – U.S. Reps. Fred Upton of Michigan, Christopher Smith of New Jersey and Brian Fitzpatrick of Pennsylvania. A companion bill in the Senate has the backing of 45 members so far – all Democrats, including Majority Leader Chuck Schumer.

“The last two years have been a turning point in our longstanding fight to help prevent gun violence and we take another leap forward in helping to save lives,” Thompson said in a news release. “Joined by Democrats and Republicans, we introduce the Bipartisan Background Checks Act of 2021 to help keep guns out of the hands of those who may be a danger to themselves or others.”

The legislation would require most gun sales, trades, gifts, and other transactions to be run through the National Instant Criminal Background Check System. Under current law, only licensed gun dealers are required to conduct a background check, whether online or in-person.

The bill does not apply to gifts or loans between relatives, law enforcement or private security professional purchases, estate transfers, or temporary storage of a firearm by a relative or household member in order to keep a gun away from someone deemed suicidal or homicidal. It also appears not to apply to guns purchased for use solely within shooting ranges or obtained “while reasonably necessary” for hunting, trapping, or fishing.

The National Rifle Association, opposing the bill in 2019, called the bill “extreme” and adding it would “make criminals out of law-abiding Americans.”

“Criminals, on the other hand, will continue to get their firearms the way they always have – through the black market, theft, and straw purchases. Forcing more government paperwork and additional fees on good people trying to exercise a constitutional right will do nothing to make Americans safer,” the NRA’s Chris Cox said of 2019’s bill.

Feel-good, “bipartisan” rhetoric aside, this is a Democrat priority bill. It was a major cornerstone of the Joe Biden presidential campaign and has long been priority of House Speaker Nancy Pelosi.

With three Republicans supporting the bill at the time of writing, it has a long way to go in becoming a truly bipartisan force in both chambers. When similar legislation was offered in 2019, 188 Republicans voted against it – while not killing the legislation’s chances in the House (eight GOP members voted for it), the Republican-led Senate stood firm in blocking it. The legislation was hailed by Thompson as the “first major House vote on gun violence prevention legislation in 25 years.”

But now, two years after that quarter-century milestone, with a Democrat-led Senate, a president anxious to give gun control bills some ink, and a House making symbolic gestures to enliven liberal causes such as gun control, we can expect Democratic leaders, as well as their cheerleaders in the mainstream press, to remain optimistic.

Leading to their optimism is the fact that passage is still all-but guaranteed in the House and the bill is six votes away from the bare majority required in the 100-member upper chamber.

While the chances are better, the arguments will likely remain the same. Critics of the bill two years ago pointed out that background checks would have done nothing to stop most mass shootings, including the Parkland, Fla., shooting in which 17 students and faculty were killed by a gunman with illegally obtained firearms. Even U.S. Rep. Steve Scalise, the Louisiana conservative who was injured severely during a congressional baseball game practice in 2017, said he opposed expanding background checks to private sales.

But supporters of the bill will point to the Charleston, S.C., shooting in 2015, in which a gunman purchased a gun and killed nine Bible study attendees despite having a rap sheet that included a drug arrest.

Expect some compromises to be offered in order to sweeten the deal for Republicans. In 2019, just moments before the House passage, a small number of Democrats joined Republicans in amending the bill to require immigration enforcement officials be informed when an illegal immigrant attempts to purchase a gun. The amendment process is where we may see the additional six votes come from in the Senate — that is, if Republicans budge all.

Interested in more national news? We've got you covered! See More National News
Previous Article SADOW: Edwards Doesn’t Care Too Much About Louisiana’s Clergy, Does He?
Next Article CROUERE: Gun Control Is Not About Crime Control