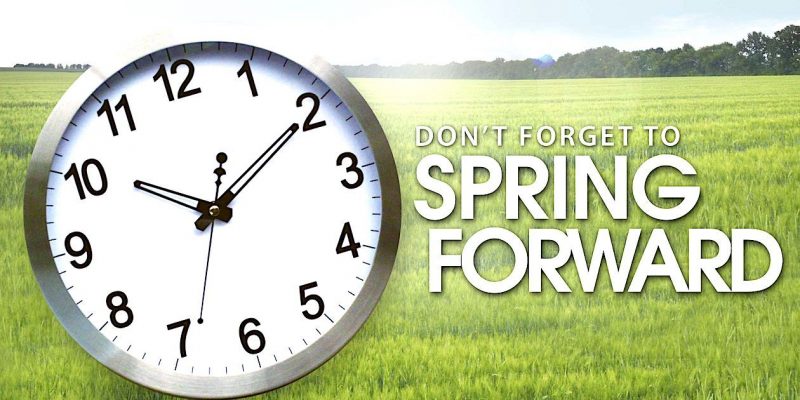 The dreaded time has come for Americans to lose one hour of sleep as we “spring forward” to daylight saving time (DST) and move forward our clocks. This adds another nuisance as it is already difficult for Americans to sleep enough with the constant stress of COVID-19, economic woes, and societal unrest throughout the country.

One easy way to improve our sleep is to end this ridiculous ritual, which creates needless headaches and causes the unnecessary aggravation of changing our clocks twice a year. It may have been a good idea when it was implemented in 1918; however, over one century later, it has lost its usefulness.

In November, it will be time to “fall back” an hour to standard time. All this clock changing leads to increased accidents, a higher incidence of heart attacks, a loss of productivity and a pointless confusion for the American people.

Fifteen states have enacted laws to adopt DST throughout the year. In 2018, 62% of California voters voted to make DST permanent year-round. Unfortunately, their state legislature has not approved a measure. This highlights a familiar problem, just because voters want something to happen does mean that politicians will act.

None of the state laws can be implemented until triggered by federal legislation. Fortunately, there is finally some hope there will be action by congress. A bi-partisan group of eight U.S. Senators have introduced the “Sunshine Protection Act of 2021.” This legislation will end the twice-yearly clock changing practices and make DST permanent.

Hopefully, our federal lawmakers will listen to a growing number of people across the country who want to stop the madness. In a 2019 survey, conducted by the Associated Press and NORC Center for Public Affairs Research, 70% of  respondents want to end the practice of having to change their clocks twice a year.

This opinion is shared by Donald Trump Jr., who tweeted “Yes. Daylight savings time all the time!” U.S. Senator Marco Rubio, one of the sponsors of the “Sunshine Protection Act,” complained that “I prefer Daylight Savings over Standard but in the end what I really want is to end this stupid twice a year time shift.”

Senator Rubio is right, the time shift is “stupid” and needs to end. In Louisiana, legislation was introduced by State Representative Dodie Horton (R-Haughton) last year because of the demands of her constituents. According to Horton, with DST throughout the year, “productivity is a lot higher, and possibly less crime, fewer car accidents, more family time.” Due to the work of Horton and other legislators, her bill was passed by the state legislature in 2020 and signed into law by Louisiana Governor John Bel Edwards.

Legislators from Louisiana and fourteen other states understand the significant economic benefits of making DST permanent. This view is shared by many of the nation’s top business advisers, including Baron Christopher Hanson of RedBaron Consulting. He noted that “Extended daylight hours allow outdoor restaurants, golf courses, parks, and patio or rooftop bars to see sunsets well past happy hour and into dinner time, as opposed to forcing everyone into dismal darkness just before standard 5 p.m. business hours come to a close.”

With more sunlight, there are more recreational opportunities which is not only healthy for individuals wanting to exercise, but it is also healthy for many businesses that offer leisure activities.

If we allow year-round DST, it will not be a first for the United States. During the WWII years of 1942-1945, we had DST throughout the year. This was also in place in 1974-75. We should have never reverted back to changing our clocks, but we did.

Now, with bi-partisan support, we can end the madness. Unlike much of the discussion on Capitol Hill, this issue crosses party lines. U.S. Senator Ron Wyden (D-OR), a co-sponsor of the “Sunshine Protection Act,” said that “Springing forward and falling back year after year only creates unnecessary confusion while harming Americans’ health and our economy.”

U.S. Senator Cindy Hyde-Smith (R-MS) is another sponsor of the legislation. She believes our country should make DST permanent because of “The public safety improvements, economic benefits, and the wellbeing of the American people.”

It is now incumbent on the American people to contact their senators and representatives in Washington D.C. and demand support for this legislation. Previous efforts by Rubio and others have failed because similar legislation was not even given a hearing in Congress.

Hopefully, this bill, because of the bi-partisan support, will be referred to a Senate committee for a hearing. If it is approved, it will move to the full Senate for a vote and then, if it passes, over to the U.S. House of Representatives, where it should receive overwhelming support. A bill approved by Congress and strongly supported by the American people will almost certainly be signed into law by President Joe Biden.

It is time for common sense to finally prevail and for the “Sunshine Protection Act” to become law in our country. This is a rare issue that can unite an overwhelming majority of Americans, but to succeed, we need to make our voices heard on Capitol Hill.