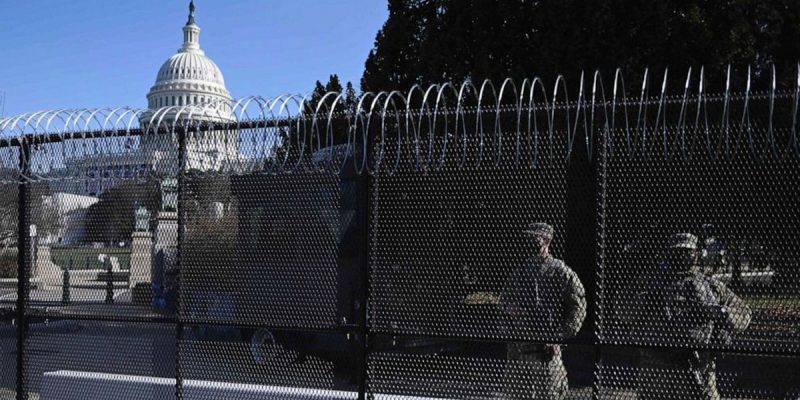 If you want to know why Pelosi shut down the U.S. House of Representatives today, that’s why.

According to the Washington Post, the Capitol Police has “obtained intelligence that shows a possible plot to breach the Capitol by an identified militia group on Thursday, March 4.”

The intelligence? Some QAnon posts on the internet which have it that President Trump is going to retake the White House today.

But not Nancy Pelosi and not the House of Representatives. Even despite the Great Wall of Razor-Wire and the five thousand semi-poisoned National Guardsmen drafted as a Praetorian Guard for our Democrat overlords in DC, Pelosi has decided to run and hide.

Because one must take QAnon seriously, you know.

The federal force charged with protecting Congress is “aware of and prepared for any potential threats towards members of Congress or towards the Capitol complex,” the statement says.

“We have already made significant security upgrades to include establishing a physical structure and increasing manpower to ensure the protection of Congress, the public and our police officers,” the statement says, adding that the force is “working with our local, state, and federal partners to stop any threats to the Capitol.”

“We are taking the intelligence seriously. Due to the sensitive nature of this information, we cannot provide additional details at this time,” the statement says.

To call this laughable is hardly sufficient. It’s contemptible.

It’s contemptible, because Pelosi knows QAnon zombies are not going to storm the Capitol today. But without an external threat to create a crisis, they can’t govern in a crisis mode.

And these people know nothing they want to do to this country would ever be accepted in normal times. Thus, there must be QAnon believers serving as domestic terrorists descending on the Capitol to be shot dead in the corridors.

Do you know any Q supporters? I know plenty. Three quarters of them are middle-class, middle-aged women. They got into QAnon because they ran out of things to watch on TV and the QAnon stuff was more entertaining than anything else, and there are nuggets of truth to be found in the QAnon stuff amid the utter dreck which resides there. Just enough to keep them interested and chatting about it over coffee.

QAnon didn’t kill anybody on Jan. 6. In fact, the Capitol Police killed a Q supporter, Ashli Babbit, that day. She was very typical of the Q people, though perhaps a bit more enthusiastic about the rumors and speculation traded in Q circles than most. She was trying to climb through a window when she was shot in the neck and killed by a Capitol Police officer. She wasn’t armed. In fact, there is no evidence any of the people who breached the Capitol that day were armed. A lie was spread that Capitol Police officer Brian Sicknick was killed by Capitol rioters; Sicknick died the next day of a stroke after reporting following the Capitol breach that he was fine. Reports that he was hit in the head with a fire extinguisher were untrue.

Everything surrounding the narrative spread by Pelosi regarding the violence of Jan. 6 appears to be overblown if not fraudulent. The fact is, Pelosi wasn’t prepared for a major demonstration at the Capitol and got burned for not arranging security when the President was willing to provide 10,000 National Guardsmen.

But now, The Narrative requires a crisis.

Why do you think certified lunatic Russel Honore’, whose hatred for Republicans comes through his social media messages as clearly as his disdain for proper grammar and spelling, is now advising Pelosi on Capitol security? Because Honore’ has no scruples about stoking a crisis mentality while someone more qualified and sane would see the value in promoting normalcy.

This is only beginning. Pelosi will do everything she can to create a real crisis to match the fake one she and her stooges are concocting. To what end is the question.