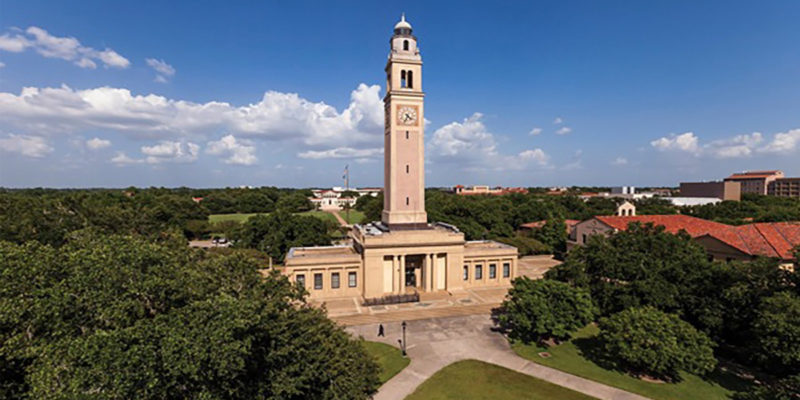 Yesterday, the search committee working on finding a new leader for Louisiana’s flagship university released a list of eight candidates for the job that it had whittled its initial list of 23 applicants down to. Former LSU chancellor Mark Emmert isn’t on that list, which doesn’t surprise us.

It isn’t a list that immediately makes the heart flutter, but there are at least a couple of names on it who merit real consideration and who inspire some confidence that perhaps someone can be found to reverse the university’s alarming decline over the past several years under F. King Alexander’s mismanagement and that of his interim successor Tom Galligan.

Droegemeier might actually be the most impressive of the bunch. He’s a meteorologist by trade who holds a professorship at the University of Oklahoma and was a key science advisor in the Trump administration, even serving on the White House coronavirus task force. Based on some of the things he’s written, there’s a good indication he’s less likely to whore out LSU to communist China like a lot of other university leaders have, which is a good thing. We also like the fact that the Biden administration has launched what appears to be a witch-hunt into the “politicization” of science during the Trump administration; ostensibly, that would include Droegemeier and it would indicate that what he was doing was rooting out junk science the federal government was funding. Naturally, Biden’s people would call that “politicization.”

He’s a serious individual, there’s no doubt about it, and we wouldn’t be upset if he ended up as the choice. Our question about Droegemeier is whether a serious scientist with no connections in Louisiana is going to have the political and management chops to clean out the nest of vipers LSU has become, or if the vipers would simply eat him up.

Of course, that was a concern when Nick Saban was hired as the football coach, and it took almost zero time before the vipers realized he was the meanest snake around and quickly became docile.

Maybe Droegemeier is somebody like that. In any event, we’re encouraged to see him on the list. You know when a meteorologist is asked a confirmation hearing what his opinion is on climate change and he declines to answer, that’s an indication he’s not a particular devotee of that cult and yet smart enough to sidestep the media attacks to come if he calls it a hoax.

Others on the list are very impressive individuals. We’re particularly impressed by two as great fits for the job.

Henderson would seem to be a natural to slide in at LSU. He’s done a great job everywhere he’s been – from Bossier Parish Community College to Northwestern State University to his current position, Henderson has acquired a reputation for maximizing resources and solving problems. He’s respected by Louisiana’s legislators and he’s known not to be a wild-eyed radical like so many academicians nowadays.

The downside with Henderson is not having experience running a flagship university. But if you’re on one of Louisiana’s other campuses it’s almost like you’re at LSU, given the huge shadow the university casts over the state. Our contacts with experience in these things have told us for years that had Henderson been in charge rather than Alexander LSU would have been in far better shape. He’s not an “internal” hire, which would be the last thing LSU needs, but he’s close enough that Henderson wouldn’t need to learn the lay of the land at the Ole War Skule before starting to fix the place up.

But if LSU is going to look nationally, we’d go with Talley.

We like him for a couple of reasons. One, he’s an alumnus, having graduated with a BS in Forestry in 1981. Talley was an ROTC cadet at LSU and was the commander of the Pershing Rifles D-16 group as a senior. So he knows his way around the campus.

And he’s got lots of experience in three key areas you’d like to see the next LSU president know his way around. Talley’s military career was impressive, and he’s clearly an academic with an eclectic set of degrees (an MBA from Oxford, a PhD in philosophy at Carnegie Mellon, an M.A in religious studies from Assumption College, an MS in environmental engineering at Johns Hopkins, among others) picked up along the way, and since retiring as a three-star general he’s launched a successful business career doing consulting work.

Talley has won three Bronze Stars during his military service, both in Iraq, two of them for essentially being in charge of rebuilding Baghdad in the middle of the insurgency in 2008 and 2009. He spent four years as the commander of the entire Army Reserve, which was 205,000 soldiers and 12,000 civilians. And in the business world he’s done a ton of consulting work, while also serving for several years as a vice president at IBM. He has a tech background and a financial background, and you’d think that could translate into fundraising.

These are the two – three if you count Droegemeier – best candidates for the job. What scares us is that Jay Dardenne is on this list.

Everything about LSU right now is inside politics and good-ol’-boy crap. They give out $800 million contracts for things which aren’t even necessary to let contracts for, and it’s done on the basis of connections and stroke.

And Jay Dardenne has always wanted to run LSU. He’s gone from one of the few Republicans in the Louisiana Senate to John Bel Edwards’ hatchet man in front of the state legislature, running dog-and-pony shows about how catastrophic it would be to trim a thirtysomething-billion dollar state budget, all for the eventual privilege of running LSU.

Commissioner of Administration in Louisiana might be relevant experience to running LSU. The question is whether there is any excellence to be found there. From what we understand about Henderson and from what’s pretty obvious looking at the CV’s of Droegemeier and Talley there’s excellence and achievement.

He’s had a small law office and he’s been a state senator for a lot of years. Then he was Secretary of State for a little while, during which time he did clean up the voter rolls. That was nice, but it’s really on the order of just doing his job after predecessors had failed to do so. Then he was Lt. Governor for four years and was OK at it. Then he ran for governor and came in fourth out of four major candidates, turned his coat on his political party and helped a Democrat governor plunge Louisiana into the position of worst-performing state in the South over the past five years.

If Jay Dardenne was an LSU graduate with that political record in, say, Arkansas or Alabama and he put his name in for the LSU president job he wouldn’t have made the final eight. He would have been laughed off the list.

Is it more relevant that he’s here in Louisiana? Maybe. But it isn’t better. It simply means he’s in position to politic his way into the job. And the fact that Dardenne’s pal Robert Dampf is the current president of the LSU Board of Supervisors would only make this a more obvious good-ol’-boy hire.

We have every expectation it’ll end up being Dardenne. We’ll say right now that if it is, it’ll be a blown opportunity. There are two or three far better choices on the board. Let’s hope the search committee has the stones to pick one of them.

Interested in more news from Louisiana? We've got you covered! See More Louisiana News
Previous Article You’ve Got To Laugh At The Framing Of The 2nd District Race
Next Article SADOW: Edwards Campaigns For Vatican Ambassador, Shuns Catholic Doctrine