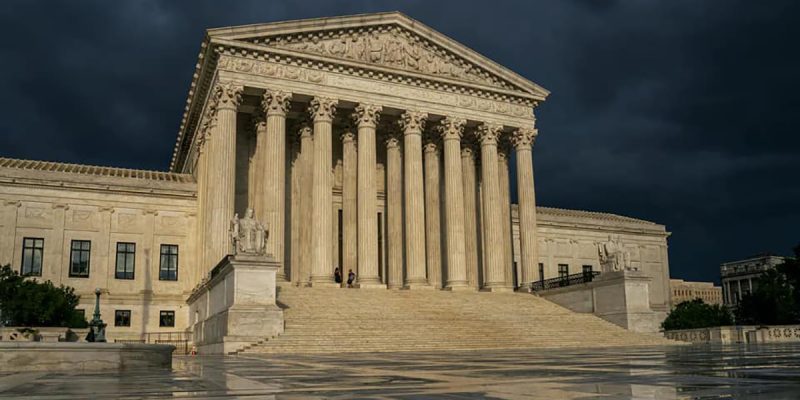 Before commencing a discussion of the latest outrage out of Washington, namely the Biden administration’s plan to monkey around with the composition of the Supreme Court, let’s review Article III of the United States Constitution.

The judicial Power of the United States, shall be vested in one supreme Court, and in such inferior Courts as the Congress may from time to time ordain and establish. The Judges, both of the supreme and inferior Courts, shall hold their Offices during good Behaviour, and shall, at stated Times, receive for their Services, a Compensation, which shall not be diminished during their Continuance in Office.

The judicial Power shall extend to all Cases, in Law and Equity, arising under this Constitution, the Laws of the United States, and Treaties made, or which shall be made, under their Authority;—to all Cases affecting Ambassadors, other public Ministers and Consuls;—to all Cases of admiralty and maritime Jurisdiction;—to Controversies to which the United States shall be a Party;—to Controversies between two or more States;— between a State and Citizens of another State,—between Citizens of different States,—between Citizens of the same State claiming Lands under Grants of different States, and between a State, or the Citizens thereof, and foreign States, Citizens or Subjects.

The Trial of all Crimes, except in Cases of Impeachment, shall be by Jury; and such Trial shall be held in the State where the said Crimes shall have been committed; but when not committed within any State, the Trial shall be at such Place or Places as the Congress may by Law have directed.

Treason against the United States, shall consist only in levying War against them, or in adhering to their Enemies, giving them Aid and Comfort. No Person shall be convicted of Treason unless on the Testimony of two Witnesses to the same overt Act, or on Confession in open Court.

The Congress shall have Power to declare the Punishment of Treason, but no Attainder of Treason shall work Corruption of Blood, or Forfeiture except during the Life of the Person attainted.

It seems that our country is under attack, again. This time the trench line has been dug in front of the marble steps of the United States Supreme Court, a venerable and untouchable institution, until now–it appears. The Biden Administration, in an attempt to circumvent the Amendment process enshrined in the Constitution, has appointed a brain trust of thirty-six, mostly Ivy League contaminated lawyers and law professors to develop a vaccine against the objective interpretation of our Constitution and laws derived therefrom.  To do so, the vaccine will be disguised as the appointment of additional judges to the Supreme Court, with the legal philosophy mirrored by the commission and other extreme left-wing organizations, most notably the Demand Justice Organization, a branch of the 1630 Fund, founded by Brian Fallon, another Harvard Graduate.

No longer is the federal judiciary to be independent. It must exist in political harmony with the other two political branches of government, most notably the Congress and their financial benefactors. This is as serious an intrusion into our Republic, as are our broken Southern border and the unabated flow of anonymous immigrants throughout our heartland. America must, to survive, have an independent judiciary, free of all political entanglements ,concomitant with our electoral process. But, if this commission has its way and influences  on new legislation consistent with the dreams of the far left, there will be no independent judiciary, ever again.

Let’s not fool ourselves. Our federal courts are not completely independent as they pretend to be. Every federal judge sought and received his or her rope through the shadowy political process, only dogs can hear. So, the majesty of the federal courts is, to some extent, paper mache, and most lawyers in the United States know this and accept it. But, if this Biden commission on court reform has its way, all pretense of judicial independence will be vitiated and our courts will truly become casinos, where the house always wins.

Lamentably, the federal courts have invited this upon themselves when their three levels opened their courthouse doors to politics–the most corrosive substance known to man. Slowly and inexorably, they have allowed the political branches to burglarize their rarified existence, through the selection process for District and Appellate Judges. One does not become a federal judge because of erudition, but for their connections to a politician. But most of the time, after they navigate the political process,  a new judge divorces him or herself from politics and conducts his or her work free of political influence–not always, but sometimes.  The United States Supreme Court mortally wounded its independence when it refused to accept original jurisdiction in the case of Texas v. Pennsylvania, which was a valid attack of voter fraud in the Keystone State.  As one can read the plain text of Article III, the Supreme Court had Original Jurisdiction over the case, but it demurred, to its institutional detriment. Now, the Biden hounds are on the loose and they are nipping at the hems of their black robes.

But the Supreme Court might be able to save itself, but only itself. A reading of the original text of Article III, allows for the Constitution to create the Supreme Court, while all inferior courts, District and Appellate, are creations of the Congress. The Congress has NO jurisdiction over the creation or operation of the Supreme Court, with the exception of Senate confirmation of its justices. Does this mean the inferior courts are now subject to the mangling of the political branches? Maybe. Maybe not. If one reads the Federalist Papers, which were designed to sell the colonies on ratifying the original Constitution, the nascent United States wanted a free and independent judiciary. So, now the courts have their destiny in the dock and whatever Biden’s commission develops, will have to meet the legislative process and if signed by Biden–or someone guiding his hand–will eventually wind its way up the docket to the Supreme Court, where  at least five of the justices will have to define what is meant by “Judicial Independence,” or whether the Demand Justice Organization will control our judicial destiny.

Hopefully, the Supreme Court will send  Biden’s commission back to their insular faculty lounges where they can, as the famous philosopher, Mel Brooks, once proclaimed, “we have to protect our phony–baloney jobs.”