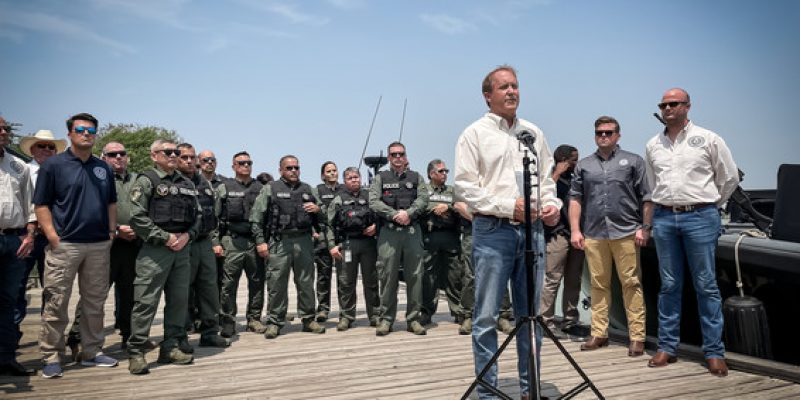 Texas is seeing a crime surge as a result of the Biden administration’s open border policies, state Attorney General Ken Paxton said at a news conference Wednesday in Mission.

As the Biden Administration’s failing policies worsen the border crisis, violent crimes like human trafficking surge. In stark contrast to President Biden’s lawlessness, Attorney General Ken Paxton is taking broad strides toward remedying the hostile criminal and humanitarian disaster at the southern border. After visiting migrant centers in San Antonio, Midland, and Donna and filing several lawsuit against the Biden Administration’s destructive immigration policies, Attorney General Paxton visited the Texas-Mexico border to assess the situation firsthand and meet with law enforcement from across the state and nation, including Border Patrol, Texas State Police, and local County Sheriffs, and visited the Internet Crimes Against Children Fusion Center.

Paxton was accompanied by state police officers, border patrol agents and several sheriffs to raise awareness about the surge.

Paxton, who has sued the Biden administration five times over immigration policies since January, has been meeting with law enforcement officials across the state.

Lavaca County Sheriff Micah Harmon spoke about the impact of crime caused by illegal immigrants in his county of 19,000 residents located 275 miles from the border. Since January, his deputies have been involved on a regular basis in high-speed pursuits and increased crime, explaining it is “a burden and a strain on our community having to deal with this.”

Sheriff Pinky Gonzalez of Refugio County described how his 13 deputies are working around the clock to respond to crime brought into their community located 180 miles north of the border with fewer than 8,000 residents. He held up a several-inch thick stack of police reports. Each case takes between 8-12 hours of an officer’s time, he said, depleting the county’s resources and limited budget. Over 3,000-man hours have been dedicated to illegal immigration crimes, Gonzalez said of his deputies’ time.

“It’s been a burden to our time and to our people,” he said. “We’ve had human smugglers going through our town going 80 miles an hour in 35-mile speed zones. They have no regard for human property or human life at all. We have been overwhelmed with these cases. We have never seen anything like this before and it has got to stop.”

Sheriff A.J. Louderback of Jackson County said, “What we are witnessing here over and over and over and over and over again and again are destructive polices that are detrimental to Texans and Americans.” He described what private property owners are experiencing on a daily basis, saying, “Imagine you wake up every day and look at a game camera … and groups of 50 to 100 [people] are within 50 yards of your home, everyday trespassing on your property, cutting your fences.

Paxton said the state of Texas and the nation as a whole are being harmed by Biden’s immigration policies.

“We are going to do our best to force the federal government to follow the laws that they passed … President Biden is supposed to enforce these laws, not say that they don’t matter,” the attorney general said.

Paxton said cooperation among border patrol agents, customs officers, sheriffs and state police “has been remarkable,” they are sharing information and working together “despite the impediments the federal government has put even on their own people.”

“The fact that they’re not coming down here, the fact that it seems like they’re trying to hide a lot of what’s going on, they’re very secretive, they’re not letting us know who is coming in, who is leaving. There should be more cooperation. If they are going to have this open border policy, we are going to be affected by it every day.

“What I would ask them, is to start following the law, go to polices that work, and please care about our state because it doesn’t seem like they really care right now.”

Attorney General Paxton has filed eight lawsuits against the Biden Administration’s failed policies, including demanding federal immigration law be upheld regarding the deportation of illegal aliens, defending the necessity of the “public-charge” rule to combat skyrocketing illegal immigration costs to taxpayers, defending Texans against illegal aliens with dangerous criminal history after U.S. Immigrations and Customs Enforcement refused to detain them, and insisting proper COVID-19 protocols be upheld for illegal aliens crossing the border and entering migrant centers.

“Law enforcement agents and officers stationed along the border continually risk their lives to protect Texas and our nation. I want to thank every branch of law enforcement here for doing all they can to keep Texans safe and for helping us shine a light on the true, severe nature of this border crisis,” Paxton said. “President Biden’s senseless combination of failed border policy and refusal to enforce federal immigration law is directly endangering Texans and Americans. Right now, I am using every legal tool at my disposal to keep dangerous criminals out of our communities, free those ensnared in human trafficking schemes, and maintain law and order.”