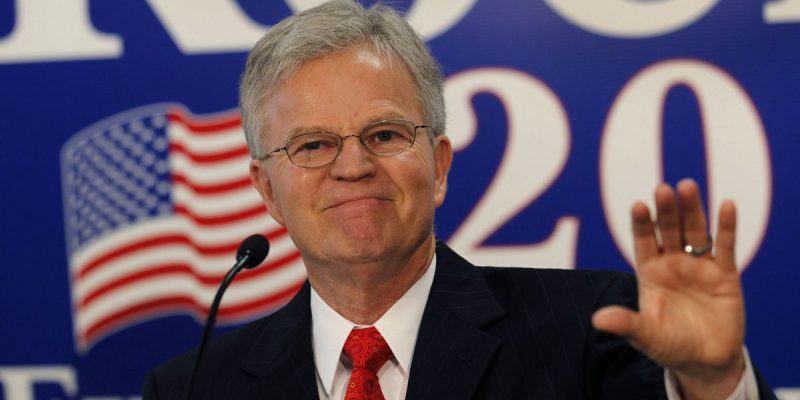 The two Louisiana governors who possessed the most raw intelligence were Huey Long and Buddy Roemer.

The two politicians could not have been more dissimilar in terms of personal ethics, effective mastery of the legislature, personal background, or political dominance.

Huey came from relatively humble roots, didn’t graduate from law school (though he passed the bar through an unusual method), and built the most powerful state electoral machine to ever exist in America.

Roemer grew up on a plantation, received a bachelor’s degree and MBA from Harvard, and was unable to win reelection as governor and would also lose an attempt at a comeback four years later.

But despite the ignominy of his losses in the infamous Race from Hell in 1991 and disappointing fourth place finish in 1995, nobody could deny Roemer’s brilliance.

After winning a delegate spot to the Louisiana Constitutional Convention in 1972, Roemer sought the Shreveport seat in the US House of Representatives in 1978.

Roemer was undercut by opposition from retiring US Representative Joe Waggonner for criticizing the Red River navigation project that had been championed by the outgoing congressman.

This would not be the last time Roemer would be electorally undone by a political issue.

Two years later Roemer slipped past Wilson to score a runoff spot with the incumbent Leach, whose win in the previous general election had been tainted by accusations of vote buying.

Roemer handily defeated Leach by a 27 point margin in a runoff held the same day Ronald Reagan was swept into the White House. Though a Democrat, Roemer positioned himself as a conservative member of his party’s caucus and a reliable ally to the Reagan Administration.

However it was Roemer’s run for governor in 1987 that would change Louisiana politics.

The three Democratic challengers of standing were Secretary of State Jim Brown and US Representatives Billy Tauzin and Roemer.
Metairie Congressman Bob Livingston was the Republican candidate and the political conventional wisdom was that the split Democratic field would assure Livingston a spot in the November runoff with Edwards.

Ironically enough, EWE was also counting on this dynamic playing out as facing a Republican in a state that had not yet embraced the GOP as his best hope of winning.

Tauzin struggled to break out his Cajun congressional district, where he shared a base with Edwards while Brown, who aside from Edwards was the only candidate to win a statewide election, failed to develop a constituency sizable enough to break out the pack after he fumbled a question about his commitment to not just win governor but also see Edwards thrown out.

Though ludicrously low in the early polls, Roemer created his opportunity by making the election a referendum on Edwards, declaring it was time to slay the dragon by any means necessary, by Democrat or Republican.

Roemer’s declaration made Tauzin and Brown look like bland politicians and simultaneously robbed Livingston as being the anti-EWE candidate by default of being a Republican.

A captivating speaker, another trait he shared with the Kingfish, Roemer sold his revolution through his eloquence and had the state’s media fawning over him in their endorsements and coverage.

Roemer also possessed something else that has become a forgotten factor in Louisiana politics: geography.

Most of Louisiana’s 20th century governors hailed from the northern part of the state as that region sought to protect their interests by voting as a bloc.

Roemer ran up the score north of I-10 burying Livingston in parishes that had traditionally voted Republican. After 16 years of being governed by either a Cajun or a Republican from a New Orleans suburb, the region of the state that produced Governors Huey Long, Earl Long, John McKeithen, Jimmie Davis, Jimmy Noe, OK Allen, and Bob Kennon wanted the Fourth Floor back.

Roemer would be the last beneficiary of this electoral vestige as ideology and party would supplant geography in future Louisiana gubernatorial elections.

Roemer marshaled his coalition into a 33% showing in the primary, leading Edwards by five points.

Not liking his second place position as a sitting governor and not drawing the runoff opponent he wanted, Edwards yielded the entire election to Roemer that night from the Monteleone Hotel.

Roemer shocked the state in the biggest political upset since 1940 when a reformer named Sam Jones defeated the Long Machine and threw Uncle Earl out the governor’s mansion.

That would not be the only parallel between the political fortunes of Jones and Roemer.

Many observers have said that by denying Roemer a straight up victory in a runoff, Edwards’ concession was an unwelcome guft that would come to haunt him for reelection.

Those who believe this stretch of political analysis are either overthinking EWE’s gambit or are unaware and too forgiving of Roemer’s numerous unforced errors.

Edwards being a shrewd politician saw that there simply wasn’t a path to victory and didn’t see why playing out the inevitable was necessary.

As governor Roemer proved for a Louisiana politician to possess an uncharacteristic willingness to tackle complex problems, especially related to the environment, that invite considerable pushback from moneyed interests.

Jack Kent, whose company Marine Shale had been fined millions of dollars by the Louisiana Department of Environmental Quality, would spend hundreds thousands of dollars in retribution advertising to take out the governor in 1991.

However it would be the Roemer vetoes of abortion restrictions passed by the legislature that would prove most costly to him, especially as a newly switched Republican.

In a remarkable coincidence the front page of Tuesday’s The Advocate newspaper featuring news of Roemer’s death also had a story about a controversial abortion law about to go under federal judicial review.

In 1991 Roemer’s move came at the behest of President George Bush and he would become the first of many southern conservatives leaving the Democratic Party for the GOP that decade, a pace that would accelerate after the election of Bill Clinton to the presidency and the later Republican take over of Congress.

In 1984 the Republican Party held no statewide offices but thanks to Paul Hardy’s election as lieutenant governor in a governor-free November runoff in 1987 and Secretary of State Fox McKeithen’s own party jump, Roemer’s defection gave the Louisiana GOP three statewide offices.

And the state GOP then set out to do everything within its power to set these sudden gains ablaze.

Rather than welcoming Roemer to the party the state GOP insisted the Republican governor would have to survive through the political equivalent of an obstacle course, running through a caucus gauntlet and convention process for the privilege of standing as the party’s official nominee.

You can imagine what Roemer thought of this and the folks behind this self-defeating absurdity, and his suspicions proved correct with the nomination going to a congressman who would pull 5% in the 1991 primary, the difference Roemer needed to make the runoff.

Worse yet, by needlessly sandbagging a sitting Republican governor the state GOP contributed towards David Duke not only making the runoff but also becoming a oft-used bogeyman invoked by Democrats to smear all Republican candidates to this day.

Not that Roemer was blameless in his own demise, for the revolutionary who turned the Louisiana banana republic on its head had four years later conducted a dispirited campaign for reelection that was rife with incompetence.

One politico who worked on that campaign recently confided that a decision was made to conserve resources for grassroots efforts in the primary for television buys in the runoff against either Edwards or Duke, an act of political consulting malpractice.

With over 60% of the primary vote going to Republican candidates, Roemer would’ve defeated Edwards in a landslide and likely set a record at Duke’s expense.

While running third was personally humiliating to Roemer, it could said that the state itself shared the embarassment of the Duke-Edwards runoff.

Four years later Roemer ran again, this time as a more assertive law & order conservative and once again the state Republican Party trotted out a Rube Goldberg nomination system that Roemer once again declined to go through yet on this occasion the LAGOP truly outdid itself nominating a candidate for governor who didn’t even qualify for the office.

While Republican State Senator Mike Foster, backed by the odd tandem of Duke and former governor Dave Treen, emerged as Roemer’s strongest intraparty rival, it would be minor candidates who would again keep Roemer out of yet another runoff where he would have been the heavy favorite.

State Representative Robert Adley, running from Roemer’s bailiwick of northwest Louisiana, and businessman Phil Preis siphoned 2% and 9% respectively from Roemer’s vote column and the former governor missed the runoff by 2%.

1995 would mark Roemer’s last campaign in Louisiana but not his final bid for office.

Roemer would end up winning by losing, going on to build a successful business bank in Baton Rouge.

In 2007 Roemer would reenter the political arena as a popular surrogate for John McCain’s presidential campaign at a time where the Arizona US Senator didn’t have many backers.

Stumping for the maverick Republican’s campaign may have inspired Roemer to launch his own quixotic White House bid four years later centered on campaign finance reform, a cornerstone issue for McCain.

Roemer would not accept any donation in excess of $100 and as he put it, every donor needed to have a pulse so only individuals could chip in and not committees or businesses

Roemer’s 2012 showing would also be much larger than Bobby Jindal’s results (53 votes) in the 2016 Granite State “First in the Nation” presidential primary.

Roemer did receive a single delegate from Texas even though he did not compete there, something that gratified the former governor greatly.

Truthfully the Roemer for President exercise was more likely a “bucket list” exercise that was an extension of his activity from the McCain campaign and the fulfilment of an earlier, more viable ambition that was scuttled in the 1991 election debacle though I don’t doubt that he enjoyed the endeavor regardless of the result.

Though a one-term governor Roemer was a consequential state executive.

While the election of Republican Dave Treen over Democrat Louis Lambert was a choice between a moderate conservative and an unabashed liberal, the Roemer victory in 1987 was a referendum on who we were as a state and what we wanted to become.
Roemer inspired Louisiana’s voters and gave them confidence that it was possible to break with the past.

And it took an unimaginable confluence of self-destructive forces, from a state GOP that couldn’t accept a Republican governor not of their making and an electorate that had grown irritated with Roemer’s personality quirks combined with the demagoguery of Duke and a segment of the state population that was perpetually enamored with Edwards to tumble backwards.

Edwards might have been governor but the old way was fading and despite declaring his intention to seek a fifth term, Edwards would once again recognize an unwelcome political reality and demure from that race.

Louisiana might not be where we should, but we’re no longer where we were.

And that’s part of Roemer’s legacy, particularly due to the adoption of his sweeping campaign finance reform agenda.

Roemer did not fully slay the dragon, which was more than a figure but a political culture represented by a person, but he mortally wounded it.