“Science can flourish only in an atmosphere of free speech.”

Hurray for fossil fuels! They have provided the human race with clean drinking water, food, clothing, homes, electricity, sewage treatment, extreme-weather mitigation, and the distribution of necessities.  In the past 30 years, they have helped lift an entire quarter of the Earth’s population out of extreme poverty.

In The Moral Case for Fossil Fuels, Alex Epstein points out that “global malnutrition and undernourishment have plummeted—by 39 percent and 40 percent, respectively, since 1990 . . . In the last eighty years, the annual rate of weather-related deaths (from extreme heat, cold, floods, hurricanes, etc.) worldwide fell by an incredible rate of 98 percent.  That means the incidence of deaths from weather is fifty times lower than it was eighty years ago.”

Though the Earth has always had extreme weather events, humans are better equipped for them now than ever before thanks to technologies powered by fossil fuels.  The importance of fossil fuels to human health, wealth, vitality, and survivability cannot be overstated.  Unfortunately, certain people are against these things, and disguise their ill will for the human race as concern for the Earth. 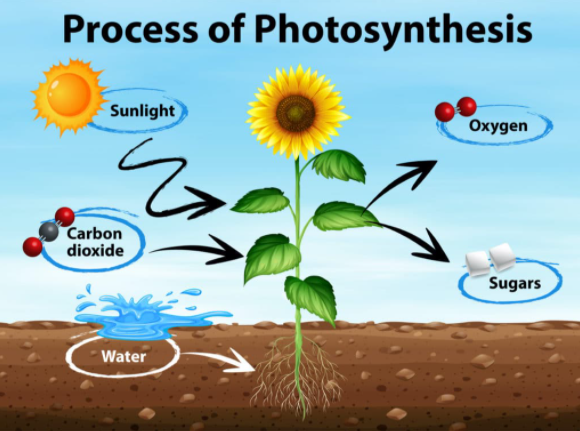 Climate alarmists are obsessed with taking CO2, now at 418 parts per million (ppm), back to a pre-industrial level—perhaps to 280 ppm, where it was at 200 years ago.

But why stop there?  If they want to restore the Earth to its pristine condition before man ever walked on it, why not take CO2 back to the level it was at 500 million years ago?  You might be surprised to learn that back then CO2 was at 5,000 ppm.  Since then, the vast majority of this life-giving nutrient has been trapped by shellfish which eventually became limestone and dolomite, or in other living things which eventually became fossil fuels.

Atmospheric CO2 was going the way of the buffalo until oil-drilling humans saved the day.

Were it not for humans putting CO2 back into the air by burning fossil fuels, it would still be in terminal decline.  It is estimated that at 150 ppm, plants could not survive, and almost all land-based life would go extinct.  To quote the eminent ecologist and co-founder of Greenpeace, Patrick Moore, “if the Earth were 24 hours old, we were at 38 seconds to midnight when we reversed the trend toward the end times . . . no other species could have accomplished the task of putting some of the carbon back into the atmosphere that was taken out and locked in the Earth’s crust by plants and animals.”

By raising CO2 from 280 to 418 ppm, the use of fossil fuels is helping plants, and saving the planet.  In fact, arid areas throughout the world have enjoyed an 11% increase in foliage cover in the past forty years due to CO2 fertilization.  Even more impressive, the increase in leaf area is equal to double the size of the continental United States. 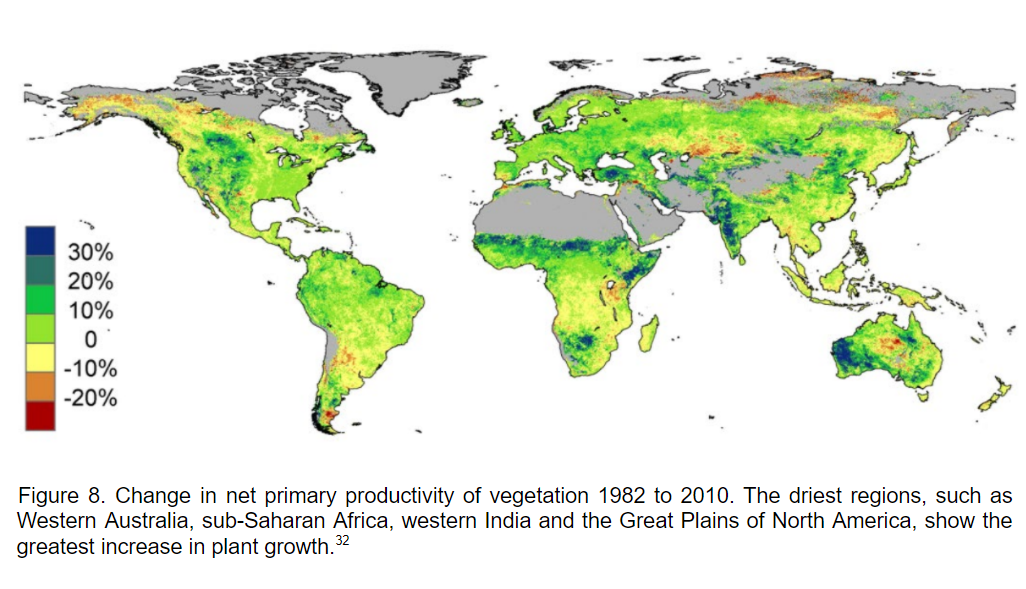 When the air is rich in CO2, plants breathe easy, become drought resistant, and actually start reclaiming deserts. The ideal level of CO2 seems to be about 2,000 ppm—a far cry from the arbitrary level of 280 ppm that climate alarmists yearn for. CO2 emissions from fossil fuels are greening the planet, growing bumper crops, and feeding all life on Earth.

But what about the dreaded “greenhouse” effect of CO2? First of all, the most abundant greenhouse gas, by far, is not CO2 but water vapor. That’s why the temperature drop at night is smaller in a humid environment than it is in an arid environment. (Maybe the climate alarmists will soon declare war on water vapor).

Second, there is no proof that a rise in CO2 causes a rise in global average temperature. None. There is only speculation. Consider this chart, which compares historic temperatures and CO2 levels: 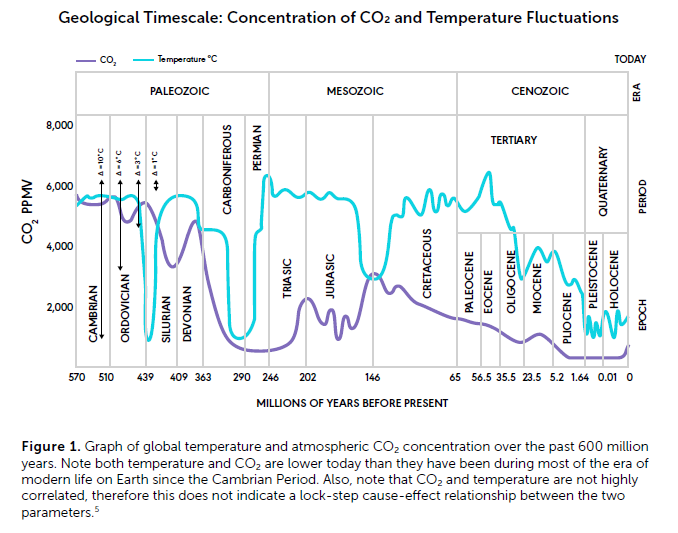 This chart was produced by Patrick Moore, who, as a founding member of Greenpeace, physically interposed himself in a rubber boat between whales and Soviet harpoon ships, and holds a Ph.D. in Ecology from the University of British Columbia.  Referring to his chart, he says “it is glaringly obvious that temperature and CO2 are in an inverse correlation at least as often as they are in any semblance of correlation.  Two clear examples of reverse correlation occurred 150 million years and 50 million years ago.  At the end of the Jurassic, temperature fell dramatically while CO2 spiked.  During the Eocene Thermal Maximum, temperature was likely higher than any time in the past 550 million years, while CO2 had been on a downward track for 100 million years.”

If CO2 doesn’t drive climate change, then what does?

The angle at which sunlight hits any given point on the Earth is probably the answer.  It changes on a daily basis over the course of a year, which explains variations between summer and winter, but also changes in the long term, which most likely explains variations from one century to the next.

According to Patrick Moore, “for the past 800,000 years there have been regular periods of major glaciation followed by interglacial periods in 100,000 year cycles.  These cycles coincide with the Milankovitch cycles that are tied to the eccentricity of the Earth’s orbit and its axial tilt.  It is highly plausible that these cycles are related to solar intensity and the seasonal distribution of solar heat on the Earth’s surface.”

Clearly, the Earth’s climate has always been changing, and has never been static.  The Earth has slowly gotten warmer since the end of the Little Ice Age (by 2 °F, to be exact), and this is good news.  A warmer world is a wetter world: there is more evaporation over the oceans, more rain, more fresh water, and more life.  During the Holocene Climate Optimum, which ended 5,500 years ago, and which was warmer than modern times, North Africa was a grassland teeming with elephants, rhinos, hippos, and giraffes, rather than the Sahara desert of today.

This discussion of CO2 has been necessary to show that the premise of climate alarmism is a deceitful fabrication.  The entire hysterical argument rests on the lie that CO2 is destroying the planet.  It is not CO2, but rather climate alarmists, who pose a real threat to the planet—they want to remove this essential ingredient of life from the atmosphere, and are working on technology that will enable them to do so.

Unlike true scientists, climate alarmists do not pursue the truth.  Instead, they endeavor to silence dissenters, and attack the careers and reputations of those who dare to disagree with them.  The climate industry is now incredibly lucrative, and climate alarmists wield a massive amount of influence in politics, academia, and the media.  In the words of Patrick Moore, “a powerful convergence of interests among key elites supports and drives the climate catastrophe narrative.  Environmentalists spread fear and raise donations; politicians appear to be saving the Earth from doom; the media has a field day with sensation; science institutions raise billions in public grants; businesses want to look green and receive huge public subsidies.”

Biden recently boasted that the Obama administration “made record clean energy investments: $90 billion.”  In an eight year period (2008 to 2016), that equates to $21,404 per minute—yes, per minute—of American workers’ money going to the profiteers of climate alarmism.  Needless to say, these profiteers “express little enthusiasm for the value of cheap, plentiful, reliable energy or the unique ability of the fossil fuel industry to provide it; instead, they keep claiming, without evidence, that expensive, unreliable, unscalable energy will somehow become cheap, reliable, and scalable,” to quote Alex Epstein.

The USA is currently the number-one oil producer in the world, and Texas is the number-one oil producer in the USA.  This is a great achievement of American grit and hard work, but the federal government is not happy about it.  In its war on prosperity, progress, and the planet, the federal government recently weaponized its bureaucracy in the form of the National Climate Task Force, “assembling leaders from across 21 federal agencies and departments to enable a whole-of-government approach to combating the climate crisis.”

According to the White House website, “these executive orders follow through on President Biden’s promise to take aggressive action to tackle climate change, and build on the executive actions that the President took on his first day in office, including rejoining the Paris agreement . . . President Biden set ambitious goals that will ensure America and the world can meet the urgent demands of the climate crisis, while empowering American workers and businesses to lead a clean energy revolution that achieves a carbon-free power sector by 2035 and puts the United States on an irreversible path to a net-zero economy by 2050.”

Should we assume that this administration’s goals are merely designed to pander to special interests, with virtue-signaling thrown in for free?  No, they serve a larger purpose.  Consider this: the advocates of the Green New Deal say they will reach net-zero carbon in 2050 by banning red meat, imposing “climate lockdowns,” and eliminating the private ownership of homes and vehicles.  Does it make sense why they also want to take away your guns?

According to Mikhail Gorbachev, former President of the USSR, “the threat of an environmental crisis will be the international disaster key to unlock the New World Order.”  Globalists love global “problems,” whether real or imaginary, because they give a pretext for global “solutions.”  They can fight the climate crisis; they just need to take away all of your freedom and private property to do so.

An attack on fossil fuels is an attack on the Texan people.  The federal government does not care about Texans, their economy, their property, or their liberty.  In fact it is belligerently militating against these things.

To quote the Texas Declaration of Independence, “the necessity of self-preservation, therefore, now decrees our eternal political separation.”  Texans have a choice of what the coming decades will be: a choice between a dream and a nightmare.

In a free and independent Texas, Texans can look forward to a bright future of economic growth, energy security, and personal liberty.  In a Texas fettered in federal chains, Texans can expect economic collapse, energy poverty, and serfdom.

May the Texan people choose wisely.

Interested in more news from Texas? We've got you covered! See More Texas News
Previous Article We Wouldn’t Be Surprised To See Weed Legalized In Louisiana, But…
Next Article SADOW: Medical Pot Will Legalize Marijuana Through The Back Door