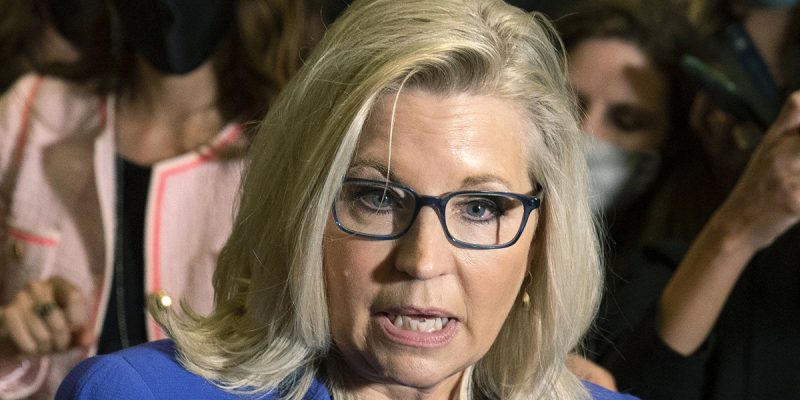 Liz Cheney isn’t the chair of the House GOP conference anymore, which is a good thing.

Earlier this week I did a podcast covering that, which you can find at The Speakeasy (because you’ve signed up for it, right? If not, what on earth are you waiting for?) here.

Elise Stefanik is the replacement, and she’s already under attack by the Washington Post. Stefanik is a member of the RINO wing of the GOP, but while she’ll make a suspect vote here and there from a conservative perspective, she’s nevertheless all about the team. Stefanik defended President Trump against Adam Schiff’s bizarre, made-up allegations and she defended him in the post-presidential impeachment. She might have policy differences with the conservatives but she doesn’t run to the legacy media to use them against her colleagues.

Which is the real reason the RINO wing of the party is hated. Stefanik might actually be different than that, and if so she could be perfect for the conference-chair job by actually helping to make peace within the caucus and getting them focused on the things they all support.

And Liz Cheney, whose record doesn’t indicate she’s a RINO, absolutely operates like one. So much so that she’s now a caricature of the back-biting, vitriolic RINO politician.

Look at what happened when Cheney was officially run off as the conference chair yesterday, for example.

Excellent follow-up from @BretBaier: "You're saying you are dedicating your life to opposing him…Why should Wyoming say reelect you when you're spending so much energy opposing him so little opposing Biden?"

Chaos ensues. It's worth a watch. pic.twitter.com/tWf4vQXPWu

Then it got worse…

This is WILD. Liz Cheney takes issue with @BretBaier's questions about balancing opposing Biden and denouncing Trump, so she goes full Stelter and trash Fox News, suggesting they've failed to do their jobs.

Baier repeatedly notes he and his show have. Cheney didn't like that. pic.twitter.com/IWR1QnIsn7

It isn’t like Bret Baier is asking unfair questions here. If anything, those questions are friendly to Liz Cheney, from the standpoint that they convey, as a friend would during an intervention, “what you’re doing is clearly not working the way you intend.”

Essentially, he’s asking her the same thing her colleagues have been telling her for three months, which is that griping at Trump for his complaints about the election does nothing to help the GOP or the House Republican caucus to move on.

She’s been told this repeatedly. Remember, she got 140 votes to keep her job after she voted for impeachment. They let her off the hook for that departure from team spirit.

But she wouldn’t respect the concerns which brought things to that vote in the first place. Why? Because Liz Cheney is RIGHT, and Liz Cheney is SMARTER THAN ALL OF THEM.

And Liz Cheney knows that her only play at this point, since she manifestly does not have the political skill to lead a coalition that would make her Speaker of the House in January 2023, is to become Joan of Arc. She has to play the martyr card publicly; to take the position that the election was not stolen which will get her good notices from the legacy media and Nancy Pelosi, and use it to run a standard political grift.

Because 2024 is coming sooner rather than later, you know. Bonchie at RedState had this right yesterday…

Cheney is in trouble, and she knows it. Thus, she’s left grifting off anti-Republican partisans who are rushing to her aide when they would have called her a war criminal two years ago. Cheney isn’t dumb. She knows she’s got no shot as a presidential candidate, much less in a Republican primary. Heck, she’s probably not even going to win re-election in Wyoming unless she shuts up and takes the spotlight off herself, something she seems loathe to do.

What Cheney does know is that by becoming a martyr, there’s money and air time to be gained. Why else run to NBC News, a network that quite literally exists at this point to destroy the Republican Party? Why use The Washington Post to leak damaging information about her own caucus? Cheney knows what she’s doing, and she’s trying to set herself up for prominence once the electorate gets its say about her actions.

In other words, Cheney has shifted on a dime from a conservative, party leader to mimicking Adam Kinzinger, and I think that’s clearly a function of her circumstance. Martyrdom brings back-slaps from the Washington cock-tail crowd and even perhaps a way for her to keep her Congressional seat if she can position herself as Lisa Murkowski did after she lost her primary.

She says she’s not running for president. Don’t you believe that for one second. If she doesn’t, she’ll find somebody to stand in for her and she’ll build a PAC to support them for which she’ll rake off a nice cut.

There are close to zero votes available in the 2024 GOP presidential primary for someone running as, essentially, Evan McMullin. Should Trump, if he runs, have an opponent capable of siphoning off enough support to make a race of it, that’s going to be somebody who is MAGA 2.0, not Bushie 2.0.

But what there is lots of for the NeverTrumper 2024 candidate is money. Oodles of dollars. Corporate checks aplenty waiting to be cashed – from Google, from Facebook, from lots of other companies who want cheap immigrant labor or to import Chinese slave-labor products, from the woke corporate set hoping and praying that Republicans will drop their objections to our current cultural insanity. It isn’t a very successful prospect, but it’s definitely a lucrative one if somebody is willing to grift those corporate suckers out of their money.

Liz Cheney is proving something you already knew deep in your heart though maybe you haven’t thought of it this way, and it’s something depressing – which is one reason why the second and third generation operators in these political dynasties suck so often is that they figure out it’s a lot easier to just grift their way through things than to make it on merit. Once you’ve got the connections and the family name, go with the flow and you’ll be taken care of.

Liz Cheney is going with the flow in trashing Trump. It doesn’t matter that she’s hated in Wyoming; she doesn’t care what those rubes think. They love her in DC, because she’s willing to put a Republican name to their never-ending Trump bashing, and that’s the new horse she’s riding.

None of this is hard to see. What’s disconcerting is that Bill Cassidy didn’t see it.

Interested in more national news? We've got you covered! See More National News
Previous Article 2022 Election Season Kicks Off In Texas; How It Affects The Nation
Next Article What Do We Think Of John Schroder As A Gubernatorial Candidate?