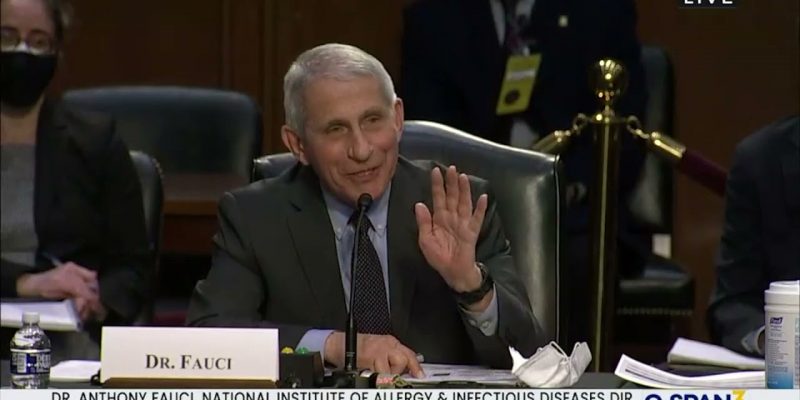 The Hayride’s readers, and those of you who also regularly read my American Spectator column, are fully aware that I have very little regard for Dr. Anthony Fauci, the director of the National Institute of Allergy and Infectious Diseases and the public health bureaucracy’s media-appointed patron saint ever since the COVID-19 pandemic began.

I wrote an American Spectator column at the end of March reiterating something I had noted back in November after election results in dispute showed President Trump losing the 2020 presidential election – namely, that Trump should have fired Fauci as soon as COVID-19 burst on the scene. There were a couple of key reasons why that should have been the case. First, it was very clear that Fauci didn’t have the country prepared for a mass outbreak like COVID despite getting annual funding sufficient for that purpose. That there wasn’t a national stockpile of PPE sufficient to the demand, some 10 years after that stockpile had been depleted during the Asian Flu outbreak, was plenty enough reason to impose some accountability on Fauci for his failures.

But secondly, Fauci demanded a strategy for dealing with COVID-19 that was plainly ridiculous, and he dragged Trump into it.

Remember Two Weeks To Flatten The Curve? Remember the about-face from masks don’t work to everybody having to wear one? All of that was attributed to Fauci’s endless media appearances. It was patently obvious he was playing it by ear, and also it was pretty obvious he was doing what he could with those disparate and demoralizing media statements to make Trump look incompetent where it came to COVID-19. Fauci didn’t defend the president when the media made up idiotic accusations, like that Trump had suggested injecting bleach, and he also consistently trashed anything that would have constituted treatments or therapies for people infected with the virus.

Those would have been two perfectly sufficient reasons why Fauci needed to go. The third major one has popped out in the past week, first thanks to a rather earth-shaking report by science journalist and former New York Times science editor Nicholas Wade which pins the cause of the COVID-19 outbreak fairly conclusively on the Wuhan Institute of Virology and then notes the very research that likely led to the release of the virus was funded by none other than Fauci’s NIAID – indirectly through a grant to a non-profit called the EcoHealth Alliance, but unquestionably nonetheless.

And this would have been pretty well known last year.

Sen. Rand Paul had Fauci in a committee hearing yesterday and lit into him on the question of research funding. Note how Fauci, while passionately denying Paul’s accusations, parses words in his responses.

It seems a reasonable judgment that if the head of the National Institute of Allergy and Infectious Diseases was funding research that would manufacture viruses capable of starting deadly pandemics in unsafe laboratories connected to military bioweapons programs in totalitarian foreign countries increasingly hostile to the United States, and this information was known after one of those viruses broke out and started a deadly pandemic, a personnel change would have been in order.

It’s also a reasonable judgment that if the fact pattern established by Wade is legitimate — and this column has seen nothing convincing to the contrary — Anthony Fauci is responsible for the deaths of a half-million Americans, trillions of dollars in economic losses, the indirect influence of a result in an American presidential election, and untold damage to national morale, civil liberties, and trust in medicine, research, and governmental authority.

A whole lot of which was known well before the 2020 presidential election.

I’m not trying to belabor the point here or to castigate Trump. All of this stuff is very much “in the weeds,” and it’s the kind of thing it’s tough to ask the president to step in specifically and fix.

But somebody on the president’s staff needed to examine the available information and recognize the horrifying implications of what had happened before Anthony Fauci was allowed to be put forward as the face of America’s COVID-19 response.