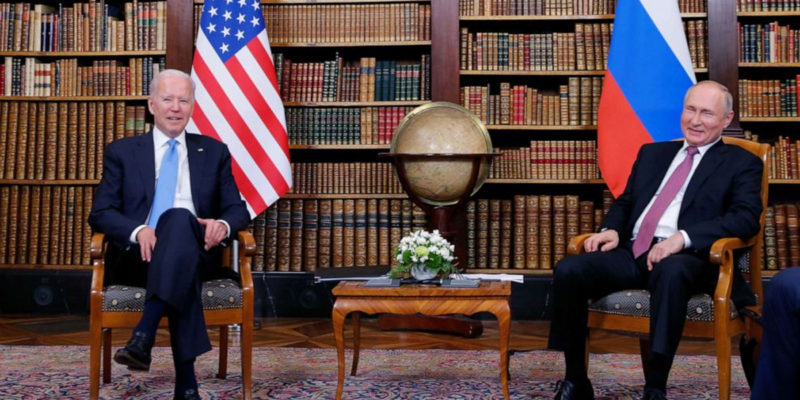 For weeks, the Biden loving media hyped the June 16th meeting between the United States President and his Russian counterpart, Vladimir Putin. It was supposed to be a chance for the United States to act “tough” with Russia since the media claimed that President Donald Trump was a Putin “puppet.”

Of course, this charge was absurd since the entire “Russian collusion” narrative, peddled by the Democrats and the media, was fiction. In reality, President Trump was much tougher on Russia than the Obama-Biden administration.

For example, in 2012, former President Obama infamously told then Russian President Dmitry Medvedev that he would have “more flexibility” after his election to make deals on issues such as missile defense. Medvedev responded that he would “transmit this information to Vladimir.”

If Trump had made such a statement, there would have been a media meltdown, but Obama was given a pass because he claimed that his promise reflected the nature of the relationship between the two countries that “everybody understands.”

While Biden was Vice President, Russia invaded Crimea and started interfering in Syria. The Obama-Biden administration did nothing. Putin knows that Biden is a weak leader who will not respond vigorously to any provocative Russian behavior.

One reason that Biden will be timid to move against Russia is that his son, Hunter, has mysterious financial ties to the country. A U.S. Senate investigation, led by Republicans, uncovered that Hunter Biden received $3.5 million in 2014 from Elena Baturina, the wife of the former Mayor of Moscow.

The report also determined that Hunter Biden received multiple payments of several hundred thousand dollars the following year. All of the payments were supposedly for Hunter’s “consultancy” work or a loan payment.

The extent of Hunter’s involvement in Russia has never been fully explained, but it is certainly plausible that he still has financial relationships with the country. It may explain why his father, President Joe Biden, has been so lenient with Russia. In May, the Biden administration removed sanctions on a company, along with its top executive, building the Nord Stream 2 gas pipeline between Russia and Germany.

The decision to forgo sanctions on the $11.2 billion pipeline was a major victory for the Russians. According to U.S. Representative Mike McCaul (R-TX), ranking member of the House Foreign Affairs Committee, the pipeline will “deepen Europe’s energy dependence on Moscow, render Ukraine more vulnerable to Russian aggression and provide billions of dollars to Putin’s coffers.”

Biden’s decision was especially questionable because immediately after taking office he canceled construction of the Keystone XL oil pipeline between the United States and Canada, citing climate change concerns. Evidently, pipeline construction is only a climate change issue in this country, but not in Europe.

Regardless of the supposed impact on climate change, there is no question about the economic importance of pipelines. When the Colonial oil pipeline was shut down by a cyber-attack, reportedly launched by Russian hackers, the economic impact on the citizens of the United States was unmistakable. The price of oil skyrocketed, which led to higher fuel prices, shortages, and long lines at gas stations in many areas of the country.

The issue of Russian cyber-attacks was supposed to be one of the major areas that Biden was going to explore in his summit with Putin. He has been complaining about Russian cyber-attacks shutting down critical businesses in our country. Not surprisingly, Biden received no promises from Putin who actually claimed in his post summit news conference that most of the cyber-attacks come from the United States.

Overall, Biden did not achieve any major agreement with Putin. Using any objective measure, the summit was an abysmal failure. Nevertheless, Biden sycophants in the media praised his performance at the summit. MSNBC host Joe Scarborough gushed that the meeting was the most “successful diplomatic mission in the twenty-first century.” How ridiculous!

Most commentators from across the political spectrum offered a much different analysis of the summit. Liberal New York Times columnist David Brooks stated that it was “dubious” that the Biden-Putin meeting accomplished anything of substance.

A new poll indicates that the majority of Americans agree with that assessment. The poll, which was conducted by Rasmussen and National Pulse, asked Americans to rate the President’s European trip, including his meeting with Vladimir Putin. The results showed that only 44% of respondents viewed the trip as successful.

These results are extraordinary since Americans have been hearing so much positive spin about Biden from the mainstream news media. Fortunately, Americans are learning to disregard the liberal media and derive their own opinions about political leaders and events.

Americans witnessed an American President so weak that he surrendered the world stage to Putin and allowed the Russian leader to hold a solo news conference. Putin used the opportunity to criticize the United States for the imprisonment of the January 6th protesters. He also made note of the Antifa and Black Lives Matter riots, while deflecting any criticism of his treatment of Alexei Navalny and his political organization.

When Biden conducted his news conference, he engaged in his usual forgetfulness and made comments littered with embarrassing mistakes. When pressed by a CNN reporter, Biden lost his composure and rudely lashed out at her. It was so inappropriate that he later apologized for his behavior.

Ironically, at the airport, as he was leaving, Biden complained about the negative nature of reporters. Apparently, he believes that even reporters who sympathize with his agenda are not positive enough about his policies. For comparison, Biden should remember how horribly the press engaged President Trump. If they gave him the same treatment, Biden would explode.

In his first five months as President, Biden has yet to face hostile questions or combative treatment from the media. However, hope springs eternal. Since White House reporters obviously need assistance, here are some potential topics to probe: his shakedown of Ukraine, his involvement in his son’s business dealings, and his mental competency to serve as President.