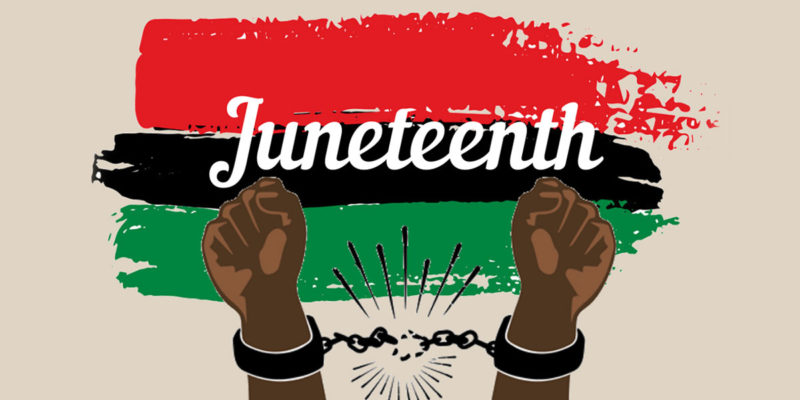 If Louisiana doesn’t appear as idiotic this time as it typically does in its policy-making, it’s only because the rest of the country joined in.

Those who didn’t grow up in Texas, and especially not close to Galveston, mayn’t know that on Jun. 19, 1865, the U.S. Army arrived there and, with the state essentially now entirely under military occupation (the Civil War’s last battle occurred about a month earlier in south Texas, and Shreveport was headquarters of the last organized ground forces of the Confederacy, surrendering under the Appomattox terms almost two months later than when the terms were accepted back east) and with the state technically not in rebellion, the terms of the Emancipation Proclamation needed reenactment.

Juneteenth, a local holiday for over a century, went statewide just as I headed out for college. That treatment is entirely appropriate, for it was a significant event in the state’s history – but nowhere else. However, over the years, its use as an instrument of virtue signaling picked up and other states, with no connection at all to the event, began commemorating it. In fact, Louisiana was rather late to the party, even though few states made it a paid holiday (although the state has had the authority to commemorate the third Saturday as Juneteenth for nearly two decades).

And now preempted, for the virtue signaling finally swamped the federal government. A large House of Representatives majority and unanimous Senate just about beat Louisiana to the punch to make it a federal holiday. Thus, more taxpayer dollars will go to waste with most of the federal workforce taking another day off to the tune of around $600 million lost to egregious symbolism.

No Louisiana member of Congress had the good sense to vote against it, although Republican Rep. Clay Higgins added a caveat to his affirmative ballot. With its official name “Juneteenth National Independence Day,” Higgins complained, “Why would the Democrats want to politicize this by co-opting the name of our sacred holiday of Independence Day?” in arguing they should have instead used the word “emancipation.”

Note as well that the federal version gives the day special importance above most other holidays. Most are designated as a specific day of the week, not a date. Until now, only New Year’s Day, Independence Day, Veterans’ Day, and Christmas have it occur on a specific date (although as well Thanksgiving Day always occurs on a Thursday). Juneteenth incredibly now joins that pantheon, and thus becomes part of the observational rule that if it occurs not during the work week, either Friday or Monday becomes the holiday.

Because of legal niceties, Edwards only could declare a half-holiday for last Friday, but next year it’s another paid entire day off for state employees, except potentially in higher education which are limited to 14 such days off a year. Otherwise, the cost of letting off around 40,000 employees averaging around $48,500 (classified) and $69,500 (unclassified) annually of $8.2 million in taxpayer bucks going down the drain would be higher.

If they had to do it, why not remove the secular New Year’s Day designation and convert Jan. 1 into a day celebrating the Emancipation Proclamation, which was issued that day in 1863 and has relevance to the state that Juneteenth doesn’t? Instead, it’s just more government waste, courtesy of Edwards and every single Louisiana legislator who voted on the bill.

Interested in more news from Louisiana? We've got you covered! See More Louisiana News
Previous Article CROUERE: Much Ado About Nothing At The Putin-Biden Summit
Next Article SADOW: It’s Time To Throw A Little Shade On Solar Freebies