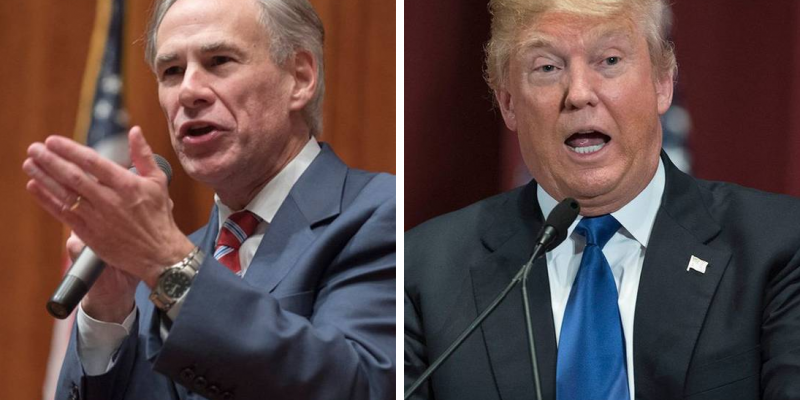 Abbott is facing a GOP primary fight from former state Sen. Don Huffines of Dallas, a lesser-funded challenge from activist Chad Prather, and a rumored entry of Agriculture Commissioner Sid Miller or Texas GOP Chairman Allen West into the race.

Trump’s statement: “Greg Abbott is a fighter and a Great Governor for the incredible people of Texas. Governor Greg Abbott will continue to be a great leader for the Lone Star State, and has my Complete and Total Endorsement for re-election. He will never let you down!”

Abbott immediately took to social media to praise Trump: “President Trump is a great friend of Texas. I thank him for his endorsement. I’m proud of the work we’ve done together to secure our border, bring more jobs to Texas, & protect the freedoms that make America & Texas great — & we are just getting started.”

Huffines countered that he and his family have been Trump supporters since the beginning, financially and otherwise, accusing Abbott of “actively work[ing] against President Trump on the most critical issue facing Texas: the southern border.”

From the hip: Some conservative critics are asking friends to contact Trump’s office to persuade the former president from any other primary endorsements until all viable candidates have emerged.

Others critics have opined that Trump may attempting to re-strengthen or rebuild his power base, especially in an elector-rich state such as Texas. Still others have pointed out Trump’s history of supporting candidates that do not quite see eye-to-eye with him, such as the Mitt Romney endorsement in 2018.

It is likely a move to dissuade other candidates from entering the race. But considering Trump’s statement that Abbott is “all in on Election Integrity,” it may be a reaction to SB 7’s last-minute failure to pass and the national news that came of Gov. Abbott’s resolution to bring it up in a special session later this year.

But with all certainty, this is one of the earliest major events of the Texas 2022 election cycle, which typically begins after the legislative session gavels out. We can expect a cascade of these in the weeks ahead, starting tonight as Land Commissioner George P. Bush is expected to announce for Texas Attorney General against Republican incumbent Ken Paxton.

Weston Martinez, a former Railroad Commission candidate and longtime activist, announced he will seek the open seat at the General Land Office — an early indicator of the upward power vacuum we’re soon to see.