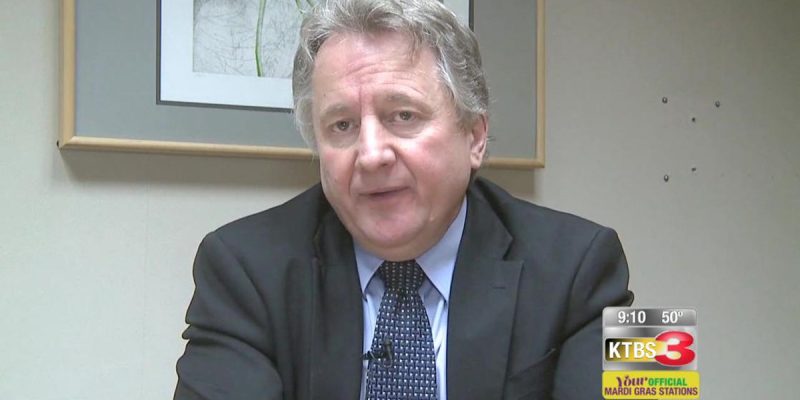 One of the better things that happened in the 2019 election cycle in Louisiana, which it turns out really wasn’t a very good cycle at all given the disaster John Bel Edwards’ second term has been, was that Barry Milligan beat the living hell out of the serial fabulist and self-described “conservative Democrat” John Milkovich in Senate District 39.

Milligan blew Milkovich out by a 51-26 margin, with another Democrat, Katrina Early, carting off 23 percent of the vote. That was the end of Milkovich’s political relevance in Louisiana, something he vainly attempted to fix earlier this year when he ran for the open seat on the BESE board, coming in a poor fourth place out of five candidates.

He’s done, and it’s a good thing he’s done. Milkovich demonstrated time and again he’s nuts when he was in the legislature, and what’s more he’s a fundamentally dishonest slimeball politician from Louisiana’s old school.

Talk to folks in Attorney General Jeff Landry’s office about Milkovich and they’ll reminisce about how he was such a big conservative that he helped to kill a bill that would have put an end to sanctuary cities in Louisiana.

Others will remember that Milkovich threw a fit about Common Core and made a big deal about how it was coming to Louisiana, all the while throwing in with teachers’ unions to fight school choice and standards for math.

Then there was the time he almost started a fistfight in a committee meeting at the Capitol because he accused the state board of medical examiners of killing a doctor in Shreveport, in one of the most bizarre performances anybody had ever seen.

And there were the loony anti-vaccine stances he took which were out of the mainstream even of the anti-vaccine crowd.

Stupid, crazy, dishonest – it was no surprise that Milligan waxed him in that October 2019 primary. Four years of Milkovich and the voters had plenty enough.

But it wasn’t enough for Milkovich, who proceeded to gin up a mob over a bill which passed on the House floor Tuesday. SB 221 is Sen. Sharon Hewitt’s bill governing the procurement of new voting machines in Louisiana, a subject which essentially is akin to playing with hand grenades. Everybody thinks Dominion Voting Systems is likely to win the bid for those new machines; Louisiana currently uses Dominion machines, and regardless of what you think of them they generally offer better prices than the other vendors.

Now, if the machines are hackable and don’t deliver an accurate result, it doesn’t matter what they cost. We get that. The question is whether Dominion’s products are any worse than those of the other vendors.

Secretary of State Kyle Ardoin put a whole bunch of criteria into the RFP rules for the new machines, and those seem like they’re the kinds of things you’d like to see. One of them is something called the Voter Verified Paper Audit Trail, which is the paper receipt you get after you vote on the machines. Everybody likes that, mostly.

The point is, Ardoin is trying to give the people what they want, but this business with the election machines has become so nutty, so in the weeds and so impossible to figure out what’s a sensible way through things that it’s just not worth getting wrapped around the axle about.

There are people who think somebody hacked into the Dominion machines to steal the 2019 election for John Bel Edwards against Eddie Rispone, a contention for which there is zero evidence that we’ve been able to see. What we know is that even if that did happen, something every single person in Ardoin’s office disputes in the hottest manner possible, it definitely wasn’t replicated last year when there really was  (and still is) legitimate concern over a stolen election.

We’ve said we think it was stolen. We don’t even get to Dominion and whatever role they might have had in that, because between the Zuckerbucks which polluted local election offices in places like Atlanta and Philadelphia with $400 million in sleazy private money to turn those offices into get-out-the-vote operations for Democrats, and the mail-in ballots which were clearly abused, you didn’t even need to go to Dominion in order to find all the irregularities you could stomach.

But none of that happened here in 2020, and without getting too far into the weeds there are a lot of safeguards in how Louisiana’s elections department runs things which makes us less susceptible to the kind of shenanigans you saw in Arizona, Georgia, Michigan and the rest last year.

All of which goes toward our take on the SB 221 controversy, which is that this isn’t even in the top 25 of things for us to get torqued up about at the legislature. As it turned out, before the House passed the bill there was an amendment inserted which would give Jeff Landry’s office oversight responsibilities over this commission which would handle the procurement process of the election machines.

That take was strengthened by the fact that when we asked around among the folks at the Legislature who are usually pretty good about engaging in these battles, nobody was too worked up about the bill. There isn’t a sense that election integrity is a huge problem here right now that needs to be remedied like in Georgia or Arizona, for example.

None of which should indicate that we have a particularly high opinion of Dominion. We don’t. We never have. And back in February when their ad agency called and placed a buy for $3,000 worth of banner ads on the site, that didn’t change our opinion.

But as we explained, those ads were going on our site whether we liked it or not, because we’re hooked up to digital ad networks and Dominion would get our ad space through those networks if they didn’t get it direct from us. We could disable the networks and not make any money off advertising, and perhaps just forget about paying any of our bills, or we could choose either to (1) get full rate card price, which was $3,000 for a million ad impressions, or (2) get pennies on the dollar because Dominion was buying through those ad networks and essentially it would be the Googles and Amazons of the world getting paid most of what they’ve spent.

If you think that three grand in advertising money buys anything in the way of editorial support from The Hayride, you don’t know us very well. We’ve been around a long time and if we’d been for sale that cheap it would have been obvious.

Which leads us back to the cretinous John Milkovich. Who wrote a long Facebook screed yesterday attacking Republicans far and wide as being bought off by Dominion. Included in that rant was this steaming turd…

Dominion is willing to buy influence in Louisiana. Dominion has stated that “we want to make sure people hear the truth.” “Dominion Voting Systems Takes Out Ad on Conservative Radio,” February 24, 2021. According to the Hayride Publication of Feb 24, 2021, Dominion “approached us [Hayride] willing to buy 7 figures’ worth of impressions”. After apparently receiving over $1M from Dominion, Hayride characterized the epic civil, legal and political War over the integrity of the 2020 Presidential election, as the “fuss that Sidney Powell and Lin Wood kicked up over the 2020 presidential election . . . .”

First of all, John Milkovich is a Democrat. That he somehow thinks he’s qualified to crusade on election integrity is breathtaking in its audacity. It’s a telltale sign of a grift. Nobody who cares about election integrity would be a member of that party. Of course, he ran as an independent when he got slaughtered in the BESE race back in March, but still – a “D” next to your name means you absolutely cannot be trusted on this issue.

As for the Sidney Powell fuss quote, here’s the whole thing from the Feb. 24 post here at the site…

I don’t want to get into the question of Ardoin’s request-for-proposals on the voting machines contract, because that is a long subject and very much in the weeds and it’s beside the question of why we’ve got those ads running on the site. Dominion is advertising here because they know that conservative voters are furious with them over all the fuss Sidney Powell and Lin Wood kicked up over the 2020 presidential election, something they are adamant is unsupported by the facts and have in fact dropped massive lawsuits on a whole bunch of defendants over. Obviously they think the allegations Powell and Wood made will make them too toxic for state election officials in a bunch of states to do business with, so they’re trying to conduct a PR campaign.

We were explaining why Dominion was putting out ad dollars in Louisiana. We weren’t minimizing the controversy over the election Milkovich’s party stole, for crying out loud.

And then there’s this, which he gets blatantly wrong…

And when they approached us willing to buy seven figures’ worth of impressions (meaning about three thousand bucks’ worth) on our rate card, here was the reality of the decision we faced.

Our rate card is posted. It’s available at the top nav bar at the site. It clearly says how much a million ad impressions costs if you want to buy them from us. And that rate is not a million dollars, or anything close to it.

And yet John Milkovich has accused us of taking a million dollars from Dominion to shut up about Kyle Ardoin’s election machine procurement.

The abject stupidity and implausibility of such a claim is staggering.

Which leads us to wonder if Milkovich is intentionally attempting to deceive the public or if he’s just this big a moron.

Claiming that the Hayride took a million dollars from Dominion is a material misrepresentation of fact which could well be actionable at law. We’re not really the litigious types, but it’s worth at least making a public demand that John Milkovich retract his moronic claim and profusely apologize for it – not to us, but to the people who pay attention to the things he says for having insulted their intelligence.

Interestingly, he actually doubled down on this stupid Facebook post by going on the radio in Shreveport yesterday morning and repeating his utterly ridiculous charge.

Again, the question is whether Milkovich is so stupid that he actually believes what he’s saying despite having been in a position to buy digital advertising in the past with his mostly-unsuccessful political campaigns – or if he’s dishonest enough to think he can bamboozle the rubes into believing it.

Based on previous performance, it might be a little bit of both.

Either way, Dominion bought no influence from The Hayride by advertising on the site. Read the Feb. 24 Hayride post for yourself – we think you’ll agree that if anyone from Dominion was expecting to have purchased editorial support from The Hayride they were clearly grossly disappointed.

Which Milkovich didn’t bother to tell you. Because of course he didn’t. There’s a reason his constituents threw him out of office – people eventually get sick of being lied to.

Interested in more national news? We've got you covered! See More National News
Previous Article Voters To Have Final Say On 8 Remaining Items From 2021 Texas Legislature
Next Article SADOW: How To Spend $38 Billion And Still Stiff The Public