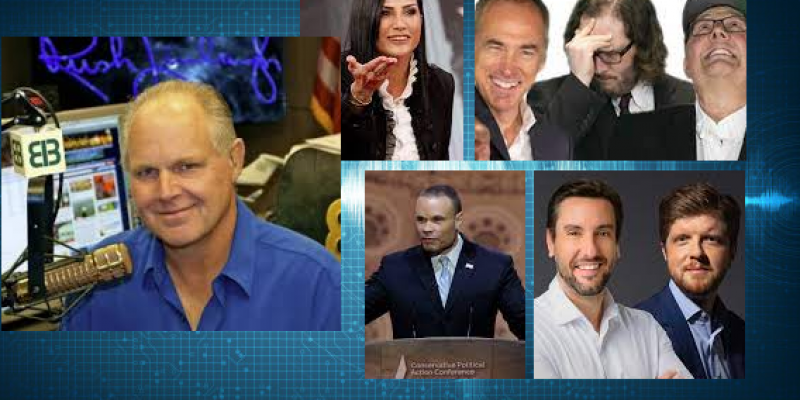 Well-before the Doctor of Democracy died in February, questions of who would fill his shoes was the talk of talk radio.

Would the heir apparent be any of Rush Limbaugh‘s rotation of fill-in guests such as Mark Steyn, Todd Herman, Ken Matthews, Buck Sexton, or Brett Winterble? Rumors abounded that former Vice President Mike Pence or even former President Donald Trump were waiting in the wings.

Or how about any of his fellow mega-hosts, from conservative thinker Dennis Prager to pro-constitution fireball Mark Levin? How about an established standby such as Sean Hannity or Internet entertainment pioneer Glenn Beck?

As it happened, there was no single host to pick up the mantle, though there is a major claim to the throne on behalf of Limbaugh’s primary carrier. Premiere Radio Networks (owned by radio mega-firm iHeart Media) named Sexton and Outkick Media’s Clay Travis as co-hosts of a new show for the timeslot to cover an estimated 600 stations.

But the radio reality is not that cut-and-dry.

Limbaugh, who hosted his last new episode on Feb. 2, died on Feb. 17 at age 70 after a much-discussed battle with cancer. At that time, Premiere Networks announced it had assembled an archive of some of Rush’s commentary on recurring political hot-button issues — enough to provide 90 days’ worth of material with which a guest host could play disc-jockey and address breaking news posthumously. Premiere was apparently ready for some lengthy negotiations.

Further “defections” followed from Entercom (now Audacy, formerly CBS Radio), Midwest Communications, and Alpha Media. This set the stage for numerous other personalities to be placed as “replacements” for the Maha Rushie.

However there were plenty of hangers-on as Cumulus Media continued to carry Limbaugh’s show through the first three months in the postmortem format. But even they introduced their own successor in the form of Dan Bongino on May 24.

After Bongino and his media holdings began to announce the host as Limbaugh’s heir apparent, on May 27 Premiere Radio Networks announced Sexton’s evening show would move into the afternoon timeslot with Travis as his co-host — also billed as Rush’s replacement program.

Midwest Communications announced “The Markley, Van Camp, and Robbins Show” as Rush’s replacement on any of their 81 regional holdings, and Alpha Media, though it has since declared bankruptcy, added 10 stations for the trio.

From the hip: Whether it’s Buck Sexton, Dan Bongino, Dan Loesch, or a regional or local favorite taking over the coveted mid-day slot El Rushbo has enjoyed for decades in a particular market, that doesn’t mean any particular presenter is “the new Rush.” That term is either marketing spin or puerile foolishness.

Talk radio is no monolith. Just as splintered as the independent personalities behind the mic are the companies that own the stations of a medium that has intransigently survived the advent of television, FM radio, the Internet, and satellite radio. They don’t march in step and never have.

The sobering fact here is that there is now no more “monoculture” in media, with so many offerings on various media and platforms. The next time you’re around the water cooler at work ask what your co-workers watched on TV last night: you’ll get myriad answers from any number of cable or terrestrial networks, plus a few shrugs from the young and TV-less. What’s a water cooler, anyway, now that so many of us are e-commuting? You’d be better served sharing YouTube clips for intra-office popularity points.

Asking about listening tastes is even more of an untested wilderness, with podcasts and audiobooks still competing for the ears of weary workers.

Speaking of the workplace: Limbaugh owed much of his rise in fame to hard-working individuals taking a mid-day break from work to catch up on the day’s events and listen to an authoritative-sounding voice tell us what we’re all thinking and feeling about the state of national affairs. That’s how Limbaugh effectively saved talk radio as a medium and kept the AM band viable.

That conservative-leaning mid-day audience still exists, but whether they continue to flip on the car stereo, download a listen-live app, or dust off the weather radio in the corner of the employee breakroom has yet to be seen.