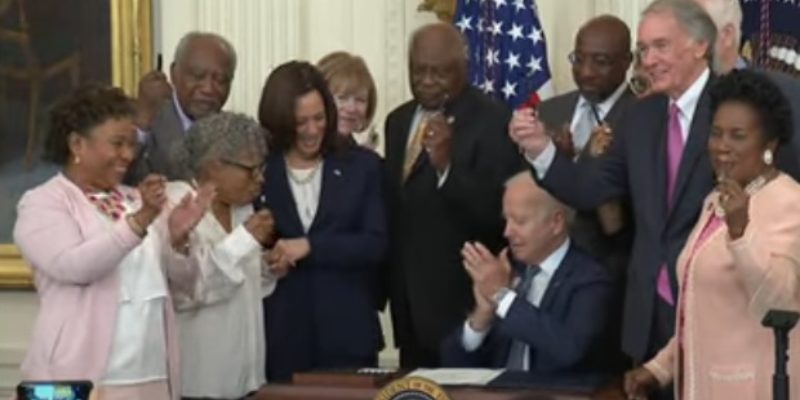 Juneteenth — long celebrated as Texas’ Emancipation Day but gradually an observance across the U.S. — became a federal holiday on Thursday.

The portmanteau of “June” and “Nineteenth” is now officially titled “Juneteenth National Independence Day” — though House Republicans attempted to change the troublesome name (see commentary below).

The holiday sometimes also known as Jubilee Day commemorates the tail-end of American slavery when the Emancipation Proclamation was finally read in Galveston, Texas, on June 19, 1865. Due to slower communications and travel of the time it took several months for slaves in Texas to learn the Civil War had ended and involuntary servitude was abolished. An order read by an occupying Union general sealed the deal.

President Joe Biden signed the holiday into law on Thursday — a pledge made by President Donald Trump during his 2020 re-election campaign.

The bill, S.475 sponsored by U.S. Sen. Edward Markey (D-Mass.), passed the U.S. Senate without objection and the House 415-14. Fourteen House Republicans objected to the use of the phrase “Independence Day” in the formal name of the holiday, while a few others said federal workers did not need another paid day off.

From the hip: Texans are largely jubilant about one of their holidays becoming a nationwide celebration.

But what may have propelled Juneteenth into the federal canon of high holy days was critical race theory — the school of thought that the American founding and other watershed moments in Western history should be re-interpreted through the lens of race relations (a la the 1619 Project).

One of the nay votes, from U.S. Rep. Chip Roy (R-Texas), explains the difficulty with the official name of the holiday.

… Juneteenth should be commemorated as the expression of the realization of the end of slavery in the United States – and I commend those who worked for its passage. I could not vote for this bill, however, because the holiday should not be called “Juneteenth National Independence Day” but rather, “Juneteenth National Emancipation [or Freedom or otherwise] Day.” This name needlessly divides our nation on a matter that should instead bring us together by creating a separate Independence Day based on the color of one’s skin. We asked Democrats to work with us on the floor to change the name to one that properly recognizes the importance of the day without creating a separate “Independence Day,” however, Democrats refused. As a country, we must stop dividing ourselves by race and unite in our common pursuit of the ideals set forth in our Declaration of Independence that all men are created equal.

We couldn’t have said it better. Saturday should be a time of unity and celebration. But leave it to Congressional Democrats to use it as a cultural wedge.

“They weaponize this bill like they weaponize everything else,” said U.S. Rep. Andy Biggs (R-Arizona), preferring that the holiday be called National Emancipation Day. His colleague U.S. Rep. Paul Gosar (R-Arizona) called the choice of name “debunked critical race theory in action.”

U.S. Rep. Mo Brooks (R-Alabama) questioned why the holiday does not celebrate the passage of the 13th, 14th, or 15th amendments, or the signing of the Emancipation Proclamation.

“Naming this day ‘National Independence Day’ would create confusion and push Americans to pick one of those two days as their independence day based on their racial identity,” said U.S. Rep. Thomas Massie (R-Kentucky).

In the same way the now-debunked 1619 Project attempts to create an alternate founding narrative for the U.S. we are now well on our way to an alternative date for American independence.

Meanwhile, nearly a million unborn children are aborted in the U.S. every year and have yet to be emancipated. When that day comes do we get to set another “independence day?”