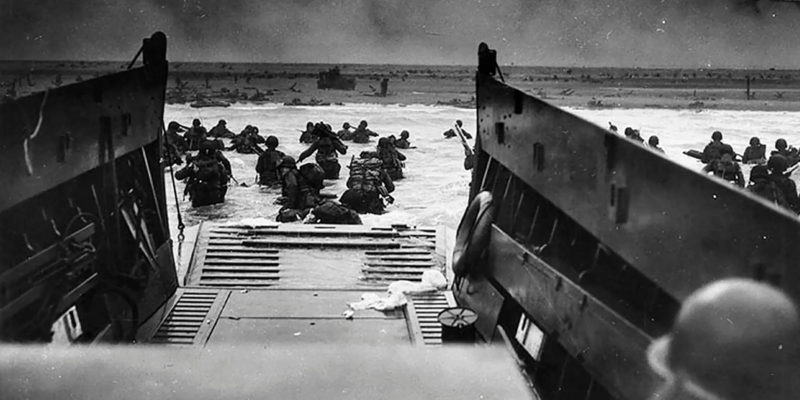 June 6th must be the most awkward day of the year for America’s woke cultural Marxists.

So much so that in 2020 leftists thought they’d be pithy and hijacked an image of the D-Day landings and twisted it into a meme declaring American GIs as the original ANTIFA.

Needless to say that social media post didn’t sit well with many folks, comparing hooligans and vandals in Portland unilaterally stopping vehicle traffic to protest whatever was trending on Twitter that day to the men who stormed Omaha Beach while bullets from the Atlantic Wall whizzed past them…or through them.

And while there were many memorable dates related to the Second World War throughout the global conflict, D-Day stands out for reasons that are distinctly American and underscore the United States’ greatness and goodness.

Consider the United States’ involvement in the European Theater.

Contrary to what you may have heard from the late John Belushi, the Germans did not bomb Pearl Harbor.

Yes the Germans had unleashed an aggressive u-boat campaign against American shipping and Hitler did formally declare war on the US as part of a protocol between Berlin and the responsible country for the December 7th attack, but German aircraft weren’t bombing New York City as they were London nor were the Wehrmacht on the outskirts of Washington as they were at one point around Moscow.

Beyond responding to a mere pro forma unilateral declaration of belligerency by a mad dictator, America’s engagement in Europe was centered on the destruction of an evil entity and the preservation of Western Civilization, a cause far beyond self-preservation and self-interest.

The United States waged a two ocean war despite the Pacific Theater being the one where we had soldiers already engaged in combat through other surprise attacks by the Empire of Japan.

President Franklin Roosevelt recognized the imperative of frustrating the Nazis before the declaration of war by Germany by providing ships and supplies to keep Great Britain in the fight while the rest of Europe fell under the swastika.

As part of America’s direct commitment to defeating Hitler and Mussolini US soldiers swarmed on to the shores of Vichy French-administered and defended North Africa, landed in Sicily, and began the slow arduous trudge up the Italian peninsula.

But the Normandy landings were the singular American military offensive as an amphibious assault of that magnitude had never been successfully attempted in the history of warfare.

Great Britain, Australia, New Zealand, and France tried this on a smaller scale in Gallipoli in World War One against the Central Powers-aligned Ottoman Empire though the assault became an edge of the water siege and proved disastrous.

Granted the US was not alone on the D-Day beaches as the UK and Canada had their own beach landings and other allied countries under Nazi occupation contributed smaller units but there’s no questioning which nation was the essential participant in terms of servicemen and material.

The combined manpower, daring, military industrial support, ingenuity (Higgins craft especially), and bravery that established the beachhead in Western Europe could only be projected by the United States.

And for all of the suffering and fatalities we incurred in this crusade the only soil we claimed are the patches of grass under which our servicemen eternally rest having given their full measure before the fortified cliffs.

Every nation in existence has aspects of their past that don’t look good in history’s rearview mirror.

Times change; ideas change; people change. What was once forbidden is now en vogue and what once was accepted practice has been repudiated and condemned.

I’m sure Mexico and its people do not want to be defined by its  pre-Colombian civilization that engaged in mass human sacrifice.

Does America’s virtues outweigh our sins?

Absolutely and it’s not even close.

Count D-Day as one of those virtues, a selfless military miracle that helped free half a Continent and was paid for in American blood and treasure.

And I challenge anyone to name a single country on this entire planet that has done something on this scale or could/would commit so many people and resources to such an altruistic endeavor.

Whenever you hear the intersectionally smug espouse the 1619 propaganda and revile this country as being systemically evil (ironically a binary concept since nothing in this Woke New World can be absolute nor categorized so broadly), ask them to square their condemnation of our allegedly illegitimate country with America’s leading role in June 6, 1944.

Maybe they’ll go back to last year’s meme to respond.