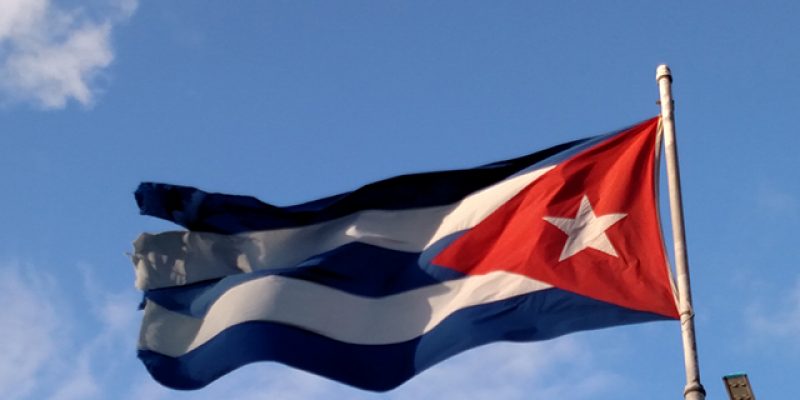 History never ceases to repeat itself.  Totalitarian regimes, founded on Marxism and Leninism and employing communist government-centric models, led by dictators who are absolutely committed to an iron grip on their nations, eventually fall into chaos and strife and then fail.  That is what we are witnessing yet again in Cuba.

We have seen images recently of brave Cuban citizens massing in streets all across that island country for the first time in more than 60 years.  They risk their lives to speak in protest of the rapidly deteriorating economic and humanitarian conditions including a lack of basic goods and services—food, medicine, and other staples as well as electricity outages.

These people—men, women, teenagers, children—are standing up for their basic human rights and dignity to a degree unprecedented in Cuba.  In the past, under the longtime communist rule of Fidel Castro protests were virtually non-existent and they were brutally put down when they did arise. Now, however, aided by social media, these freedom fighters appear willing to stand up to the government, speak truth to power, and chant in unison, No More!  No Mas!

How has the Cuban government responded?  The same way dictators always respond, by brutally cracking down on the demonstrations all the while employing the same lies, doublespeak and euphemisms tyrants always use.

Cuban President Diaz-Canel dishonestly described the demonstrations as being led by a small group of “counter revolutionaries, sold out to the U.S. government” and he encouraged supporters of the government to defeat these freedom seekers.  Not long after, government officials terminated virtually all communication with the rest of the world and then unleashed “security forces” across the country.

Is this not a tired, yet unsettling, refrain? This is how tyrants and dictatorships always respond.

First, employing censorship, propaganda and control these thuggish tyrants first step is to deploy all media to lie to their citizens and the world about the very existence of the demonstrations; Second, tyrants deny and suppress the deplorable human rights abuses and economic desperation that triggered the freedom fighters to risk their lives to speak out demanding change.  This false narrative has included painting the uprising as an attack on the virtue and sanctity of “Mother Russia” or the challenge to a nation’s brutal tyrant as an attack on that nation’s “enlightened” way of life and the so-called “God king” leader who himself is a cult of personality.

Third, tyrants cut off outside communication of every kind.  Fourth, they attack their own people to crush the resistance while labeling the uprising as involving a small group of “counter revolutionaries.”  After that, “show trials” are conducted and the “guilty” are convicted, then often “disappeared” from the face of the earth.  Lastly, we often see a fake, choreographed “show of support” for the regime.

Whether we are speaking of the former Soviet Union (or the current predatory territorial view of other nations Russian president Vladimir Putin might seek to conquer—like the Crimean Peninsula in Ukraine); or the iron grip of the Chinese Communist Party, the brutal theocracy of Iran or the vicious tactics of North Korea’s Kim Jong Un, the motives and methods of tyrants never change.

America must respond clearly and boldly and not risk further damage to our moral authority in a way reminiscent of other American derelictions like our government’s handling of the Arab Spring or our weak and emasculated response to Putin’s annexation of Crimea, or to the gassing by Syria of its own people notwithstanding the U.S.’s so-called “red line.”

The courage we are witnessing by the long subjugated Cuban people “yearning to breathe free” is a truly historic moment that cannot be ignored.  Again, our commitment to this Cuban fight for freedom is a direct reflection of our commitment to our own way of life.

U.S. apologists of the Cuban government allege that these protests were caused by the Coronavirus.  If so, this raises key questions about the ability of the much-heralded Cuban health care system (socialized medicine) to care for its own people without completely melting down.

Cuba’s freedom fighters confirm, yet again, that socialism—including the Union of Soviet Socialist Republics (USSR) and the National Socialist German Workers’ Party (the Nazi Party; yes, Nazism was Socialism and in addition to his intrinsic evil, Hitler was a Socialist and that movement must claim him too)—maintains its perfect record of failure throughout the world, and that given a chance and time, freedom will always find a way.

It has been a source of great pride to watch freedom fighters in the streets of Havana proudly flying high the beautiful American Flag as a symbol of their willingness to fight and die for the justice and liberty and freedom that it represents to them and to the entire world.

For the same reason, it has been a source of great sorrow to recall the protests of U.S. domestic terrorists in Portland and Seattle and in numerous other U.S. cities burning, trampling and urinating on the same American Flag that, from the time of our Nation’s founding, more than 1.1 million Americans have paid the ultimate price to preserve and protect by freely giving the “last full measure of devotion” on brutal, unforgiving battlefields, and in the skies and on seas and oceans the world over—and then to reflect upon statements from Pres. Biden, AOC and many other defenders and apologists of this anti-American anarchy.

In 1982, President Ronald Reagan spoke to members of the British Parliament. In the speech, he predicted the collapse of Communism and its evil twin, Socialism, saying these anti-freedom “isms” would be left on the ‘ash heap of history.’   Since the collapse of the Soviet Union in 1991, his prediction has been born out in much of the world.

Now, the U.S. government must do all within its power to ensure that this Cuban vestige of Marxism/Communism/Socialism is also buried for good.  The long arc of history is said to bend toward justice and freedom and, if so, that means aiding this historic and pivotal Cuban fight for freedom now.

Interested in more national news? We've got you covered! See More National News
Previous Article Did You See The Gigantic Opioid Settlement News This Week?
Next Article SADOW: How The LAGOP Can Leverage The Veto Session Loss Into Victory