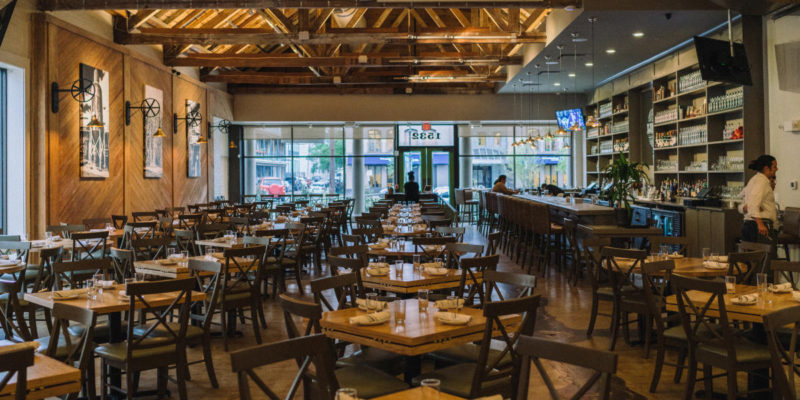 If you don’t know about this case, what you’re about to read will probably infuriate you about as much as anything else you’ll see on the internet today. This lawsuit is ridiculous, and naturally it’s typical of the mentality which has set in among lots of people in New Orleans who are absolutely killing that city, but the underlying behavior is something you’ve seen over and over again among entitled idiots who exist across racial lines. And not just in New Orleans.

But yeah – in this case the entitled idiots happen to be black. Or Black, as the New Orleans Advocate insists on terming them.

There was an incident at a restaurant on St. Charles Avenue in New Orleans, specifically the Lula Restaurant Distillery, back in May. You had a group of no less than 28 people show up, without a reservation, to celebrate the high school graduation of one Sanai Butler.

She was dressed in a rather festive costume – specifically a bikini top leaving not a lot to the imagination and a pair of matching leggings. She had a jacket on over the top, plus a stole signifying her graduation, but otherwise she looked like something better suited to Miami Beach than a mid-range New Orleans restaurant. And when the party made its way into the restaurant, she took the jacket off and proceeded to model for pictures just with the bikini top on. So everybody in the restaurant got to see that.

Bear in mind that Lula offers private dining and has two different private rooms to accommodate parties of the size in question. Neither one were booked. They just showed up. Supposedly some members of the party called ahead and were told “come as you are,” but the restaurant employee who said that likely had no idea what they were in for.

Erin Bourgeois, one of the partners in the restaurant, followed Sanai Butler into the restroom and told her the bikini top wasn’t quite as cute as she thought, that it was “very inappropriate” and that she needed to keep her jacket on. She did this in the restroom, so that Sanai was not scolded in front of the whole restaurant. Most people would be somewhat appreciative about things being handled that way; it would tend to allow you to save face.

But that didn’t work on these people. Not at all.

Butler’s mother proceeded to hit the roof over the fact that this white woman would tell her daughter something about her attire, so she and two of her other family members descended upon the table where Erin Bourgeois was sitting and proceeded to berate her about it. The main complaint, according to the Advocate’s writeup of the lawsuit, was La Shawn Butler was unhappy that “If you had something to say about her outfit, you could have approached me as her mother.”

Because that surely would have gone so much more smoothly.

Go to a restaurant and flagrantly assault its dress code, then offer vituperation when the ownership attempts to gently enforce its standards, and something fairly predictable will happen.

Namely, you get asked to leave. Which is precisely what Erin Bourgeois told La Shawn Butler.

To which the answer was “No.” Butler told Bourgeois they hadn’t done anything wrong and they’d leave when they were finished.

What happens next? The police get called, right? Right. The police were called. And the police actually showed up.

Guess what happened then?

Two NOPD cruisers made their way to the restaurant, saw that no one was dead or dying, and essentially enacted the police department’s new motto – Not Our Problem, Dude.

No arrests were made, and to the best we can tell based on media reports the Butler party wasn’t even kicked out of the restaurant. It sounds as though they were paying their bill and leaving when the cruisers showed up.

But when the Advocate’s Ramon Antonio Vargas wrote up the initial incident back in May, you would have thought this was Bull Connor getting out the fire hoses.

The day marked a major milestone for Sanai Butler.

The 17-year-old had just graduated with honors from Warren Easton Charter School, and her mother told her she could choose any restaurant she wanted for a big celebration.

Sanai picked Lula Restaurant Distillery on St. Charles Avenue, and a group of 28 relatives and friends, all Black, gathered to honor her and hear some big news: she would be heading to Talladega College in Alabama.

But what was supposed to be a joy-filled meal ended with the restaurant calling the police because a woman — identifying herself as the owner’s wife — didn’t like the bikini top that Sanai was wearing, according to the family.

Officers ultimately didn’t arrest anyone. But Sanai’s mother, La Shawn Butler, said the restaurant’s decision to involve the New Orleans Police Department was excessive and hurtful. “I feel it was racially motivated,” she said.

The group had not been told of a dress code, and there didn’t seem to be one posted in the restaurant, Butler said.

She also said the woman, who was White, approached Sanai in a bathroom, but should have approached adults at the table. Sanai and her mother, after viewing pictures online Wednesday, said the woman was Erin Bourgeois, wife of owner Jess Bourgeois. Lula’s declined to comment on the Butlers’ identification.

“This is a child at the end of the day — if you had something to say about her outfit, you could’ve approached me as her mother,” Butler said.

And of course this got thrown in…

A year ago, a Minneapolis store clerk called police on George Floyd because he suspected Floyd had given him a counterfeit $20 bill, setting the stage for what would become Floyd’s tragic killing at the hands of an officer who has since been convicted of murder. That is what made the event so scary, said Butler.

“That could’ve gone so many different ways,” she said.

All the George Floyd crap, which sure seems completely irrelevant to anybody who isn’t a left-wing moron, actually made it into the lawsuit the Bagneris Law Firm filed over the incident.

Try to run a business, if you can even survive what the local tyrant politicians have done to you with COVID as an excuse, and you will soon be overrun by entitled barbarians who bring a crowd large enough that normal people would think to book a private dining room. Said barbarians will then parade their 17-year old princess around in a bikini top civilized people would not find appropriate for a backyard gathering much less a public restaurant, and then have her take photos throughout the establishment which will then be posted to social media indicating that your business sanctions and endorses that kind of attire among your patrons. And when you attempt to politely put a stop to that, you end up in a verbal altercation with a hostile invading army who accuse you of bigotry and racism.

Then when you ask that the authorities help to sort out the problem you’re told you can’t even get their help to remove disruptive and unwanted patrons from your own place, which is now written up in the local paper as a Jim Crow establishment to be villified and trashed by the city’s majority population thanks to the local newspaper’s leftist reporters.

And finally you have to defend a frivolous, meritless lawsuit by the barbarians and their barbarian lawyer seeking to pillage your bank account.

The Advocate’s writeup of the lawsuit has this, which just caps off everything perfectly…

“None of us should live in fear that the police will be weaponized against us,” the Butlers’ suit argued.