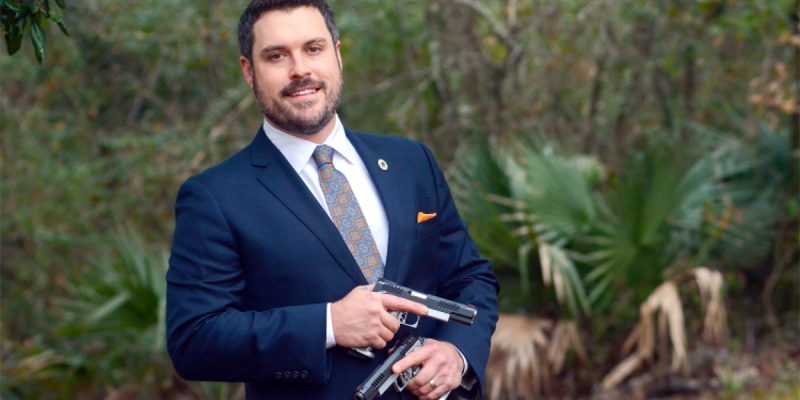 …which they did – or at least some of them did – yesterday in a press conference in Baton Rouge full of cops howling about gun crime.

A crowded room of local law enforcement leaders pleaded for lawmakers not to challenge Governor John Bel Edwards’ veto of a bill that would allow Louisiana residents to carry a concealed firearm without a permit.

Among those in attendance were East Baton Rouge Sheriff Sid Gautreaux, Baton Rouge Police Chief Murphy Paul and other heads of capital area law enforcement agencies. They were unified in opposition to Senator Jay Morris’s proposal, which would have allowed anyone who “meets the same eligibility requirements” for a handgun permit to legally carry without that documentation.

The news conference Thursday comes as some legislators push for a veto session to challenge the governor’s decision to shoot down certain proposals that gained approval in the Louisiana House and Senate. Among the most controversial legislation was a proposed ban on transgender student-athletes in girls sports and the concealed carry law, which was the center of discussion Thursday.

“This poses an exponential threat to every law enforcement officer in the state,” Sheriff Sid Gautreaux said. “It’s hard enough for us to do our jobs… Can you imagine going into a shooting situation, and you walk in a room and everybody’s holding a gun? You’re not going to know who the bad guy—who the good guys are.”

A couple of things are true here.

First, this was a put-up job by John Bel Edwards and his staff, and he wasn’t fooling anybody. The governor holds a whole lot of strings on sheriffs and police chiefs around the state, and essentially when he says jump they ask, “How high?” Everybody knows this, and it’s one reason sheriffs and police chiefs are possibly the staunchest defenders of Louisiana’s political status quo there are.

The issue surrounding the veto session comes down to this now – who’s putting more pressure on legislators? Edwards, or their constituents?

Bear in mind, two weeks ago the conventional wisdom was there was no way a veto session would happen. That changed completely because what the AP’s Melinda Deslatte suspiciously termed “Outside Groups” began generating big numbers of phone calls and emails from the constituents of the legislators demanding an override of the vetoes of SB 118, the constitutional carry bill, and SB 156, the bill protecting girls’ sports from an invasion by confused biological males.

Edwards is losing this fight, and badly, so he ginned up a bunch of law enforcement people to try to stave off the override of SB 118.

How’d that go? Well, here was Rep. Blake Miguez, the head of the Louisiana House Republican delegation after that press conference…

Miguez was always going to be pretty stalwart on the constitutional carry issue, but still – pumping lead into the session-cancelling ballot is about as unmistakable a signal as he could set, at least where SB 118 is concerned. And that’s going to present a visual which trumps that press conference.

There were only 12 of the state’s 64 sheriffs on hand for that press conference, which is a good indication that most of the sheriffs really aren’t all that torqued up about the concept of constitutional carry in Louisiana.

But perhaps more than the problem of this being Edwards trying to mobilize people who are under his thumb, this press conference was a dumb idea because it’s going to hurt the credibility of law enforcement.

Remember, Louisiana is in the middle of a crime wave. Its two largest cities are in the top 7 nationally for murder rate. In Baton Rouge, there is almost zero public confidence left in the police, and particularly in Murphy Paul, who’s seen as a sock puppet for the city’s incompetent mayor Sharon Weston Broome.

There is also a sense among much of the state, and particularly most of the people who live in districts represented by Republicans, that in a situation where it would be advantageous to have a gun, like for example if you’re being carjacked or somebody invades your home, the cops aren’t going to be anywhere nearby and you’re on your own.

Lafourche Parish sheriff Craig Webre put out this business at the press conference about the danger of “vigilantes.” Which comes off as ridiculously thin. All that’s going to do is offend people who see crime out of control and cities burning with the police doing next to nothing.

And honestly, the black community ought to be miffed about that press conference given the Ronald Greene case and Edwards’ likely involvement in covering up the State Police’s actions in killing Greene. Maybe having law-abiding citizens carrying guns earns them slightly better treatment from the police in the main, which is just as applicable to the black community as it is everybody else.

The point being that the sheriffs and police have long been given pretty wide deference by Louisiana’s legislators in the past, but public sentiment surrounding law enforcement is a bit on the wane even in a red state like Louisiana. Fighting a constitutional carry bill when the public more and more perceives society is fraying and the streets are less safe sends a very unwise signal that the police are less about protecting and serving and more about holding power over citizens.

It was a dumb move. We doubt it works. And most of the sheriffs were nowhere near that press conference, which we take as evidence they can see which way the wind is blowing.