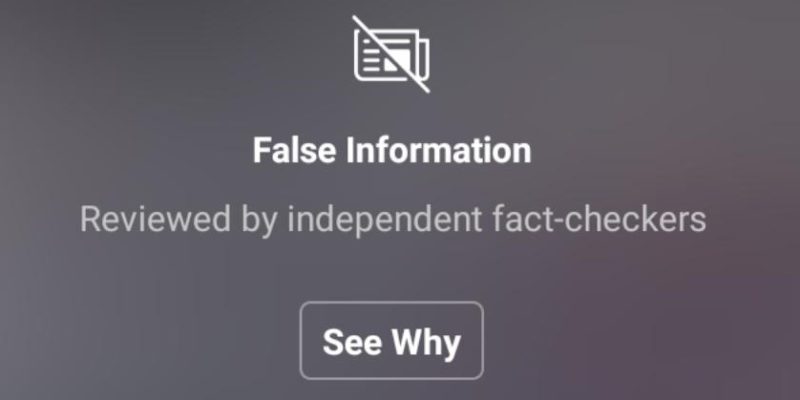 It should come at no surprise that the latest publication of hard science showing the truth about COVID masks in the Journal of the American Medical Association or JAMA was called “fake News” by Facebook.  The Study based on a sample of 26,000 children shows the average concentration of CO2 trapped by the COVID masks that was breathed in was between 13,000 and 14,000 PPM.  The Daily Caller pointed out that one subject, a 7 year old girl, breathed in as mush as 25,000 PPM of CO2.  This is well past healthy levels of CO2 ingestion and also confirms what we all witnessed in this video that came out at the Start of the COVID pandemic. However the “fact checkers” at Lead Stories are even trying to push JAMA to retract the story and according to John Solomon’s Just The News, Facebook is threatening to punish users who share the JAMA study because the hard science documented goes against the Fauci Narrative.

The Hayride in the past has covered the hard science behind adverse effects of masks trapping CO2 including a Harvard Study that showed CO2 exposure in ambient indoor air as low as 945 PPM lowers cognitive ability 15%, and that jumps to a 50% cognitive loss at 1,400 PPM.  That’s ambient indoor air alone without CO2 trapped close to the nose and mouth caused by a mask.  Even Scotty Kilmer warns of CO2 buildup causing grogginess just using your cars A/C recirculate funtion.

We even documented the CDCs own publications warning of the dangers of wearing masks due to trapped CO2. The article was even relinked by The Gateway Pundit in April 2021. The CDC’s response to The Gateway Pundit’s coverage was to alter their website in an attempt to discredit reporting on the hard facts that go against the Fauci Narrative by adding text in red band   “Please note that this blog is specifically about respirators used by healthcare workers during long shifts and not facemasks worn as barrier control to stop the spread of COVID.” As a timestamp, The Hayride article was discussed  the day it was published on the March 22. 2021 edition of “On The Air With Mike Allen”.  Why that’s important is we showed a screenshot of the article and it clearly shows the red bar was NOT on the website when it was cited as a source.

There has been much criticism directed against the “fact checkers” at Facebook for suppressing hard science that goes against the Fauci Narrative  The Post Millennial ran a detailed article on Facebook censoring hard facts showing the dangers of masks calling the “fact checkers” fact blockers because the hard science went against the Fauci Narrative.  Jack Posobiec also called attention to the article with a  tweet.  Posobiec in fact has a history of confronting the fact checkers. Pasobiec’s tweet on July 9 2021, also called out Twitter with the statement, “Twitter is a monopoly and should not be banning people based on hitpieces from discredited partisan propaganda operations.”

All of this shows the dangers of Big Tech suppressing the free flow of fact based information that goes against the narrative of Big Brother.  We previously documented that the outlawing of Big Tech censorship needs to take place at the state level.  With Texas for example it isn’t the Senate but the Leadership of the Texas House that’s blocking such legislation.  Sen. Bryan Hughes’s bill focusing on Big Tech Censorship, SB12 didn’t even get a hearing in the 2021 Regular Session of the Texas Legislature.  House Leadership has had a history through the past three speakers of slow walking to outright killing conservative legislation to appease the Democrats.  Speaker Dade Phelan did this with Sen. Hughes’s election integrity bill SB7, where there actions were so egregious that Lt. Gov. Dan Patrick publicly called this out on Dallas Talk Radio.  A Special Session has been called and SB7 was refiled as SB1 and SB12 was refiled as SB5.

>Reforms of Big Tech need to be passed into law when taking into account suppression of the hard facts surrounding the adverse effects of the mask mandate affecting the entire Texas population. That much CO2 exposure over that long of period of time, 8-12 hours a day almost everyday for shift workers and school children for almost a year is probably going to have long term health repercussions, probably worse than smoking.  Children are especially affected since their brain’s are still developing.  The 2021 STAAR testing score averages are much lower especially in math.  I would not surprise me that the official explanation is disruption in the public schools and that home learning is not as effective as a back-handed kneecapping of traditional homeschooling, when the reality it’s the masks trapping the CO2 causing cognitive loss and potential causing brain damage, possibly permanently adversely affecting the test scores.

Concerns should also be addressed at the those that were pregnant during the mask mandate.  Is the mask trapped CO2 getting transmitted from the mother to their unborn child in a similar fashion as if the mother smoked or drank during pregnancy?  Is there going to be a whole group of people born between 2020 and 2022 that are going to have symptoms similar to fetal alcohol syndrome?  These are the questions that need to be asked.  If the Texas Legislature is so pro life, then why is the Texas House against passing legislation that would prevent this information from being suppressed by Big Tech for the past year because the hard science goes against the Fauci Mask Narrative.  If we don’t see real reforms then we as a society will continue to journey into a dystopian future that is one part Idiocracy and another part 1984.

Interested in more news from Texas? We've got you covered! See More Texas News
Previous Article It Was A Mistake For The Cops To Weigh In On SB 118…
Next Article Former Freedom Caucus Member Elected Texas GOP Chairman