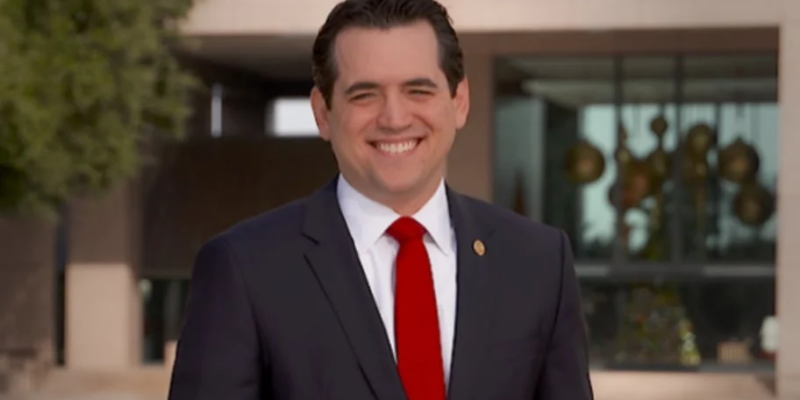 A former member of the conservative Texas House Freedom Caucus took the reins as state GOP chairman tonight, in a vote taken not far from the district he once represented.

Former state Rep. Matt Rinaldi was elected with one vote over the thresshold necessary to avoid a second ballot at a called meeting of the State Republican Executive Committee (SREC) in Lewisville, located a few suburbs north of Dallas. Rinaldi, who represented an area of northwestern Dallas County from 2015-19, was one of the more outspokenly conservative members in the lower chamber and continued to be a voice of conservative opposition in the years following.

According to numerous reports the vote tallies were:

Rinaldi, of Irving, won the election on the first ballot, winning 34 votes from the 64-member SREC against three opponents. Thirty-three was the minimum number to win outright.

Rinaldi fills the incomplete term of outgoing chairman Lt. Col. Allen West, who recently announced a run for Texas governor. Texas party chairmen are elected to full, two-year terms by delegates at convention, though the SREC may fill vacancies.

“I’m honored the SREC chose me to lead the Party into the ever-important 2022 election cycle,” Rinaldi said, in a statement released by the Texas GOP. “Republican state office holders and legislative majorities have led this State to prosperity and success. We look forward to continuing to make Texas a beacon of freedom for other states to emulate.”

The runner-up, Covey, is president of Texas Republican County Chairmen’s Association and Orange County GOP Chairman. Wilbanks, a lobbyist, once served as executive director of the Texas GOP. Burch is a well-known Republican activist and a former contender for Texas Congressional District 25.

From the hip: Aside from his legislative experience, Rinaldi has another strong advantage that may go overlooked in coverage of his win: He knows how swing districts such as HD 115 operate, and how finnicky voters can be during changing national political landscapes.

He has learned the campaign skills and valuable life-lessons necessary for a well-informed statewide strategy to protect vulnerable Republican-held jurisdictions.

Better for conservatives: He is unlikely to hide Republican platform principles under the rug (if his previous legislative experience tells us anything) — a strategy of concession some advocate when trying to hold on to districts trending blue.

Even better for Republicans: he has the chops to excite the conservative grassroots and keep them interested.

Better still: as a former supporter of West, he stands to maintain the populist push that supported him and by extension Donald Trump, which love them or loathe them, is a fresh infusion of ground troops and funds for the Grand Ol’ Party.

This is no slight toward Covey, Burch, or Wilbanks, all of whom have their advantages and would have led RPT well (and might still). But as the Joe Biden administration continues to make 2022 and 2024 easy-wins for GOP challengers, Rinaldi flies in as a rare bird who can unite social conservatives, fiscal conservatives, Trumpers, and even former Ron Paul supporters as a formidable coalition.

Here’s where he may falter: moderates and the political professional class who find his outspoken demeanor off-putting and his criticism of statewide leadership counterproductive — they could set up roadblocks for him as he builds his teams and learns the ropes. An impressive fundraising haul or two and cooperation with the Big 3 may soften that criticism somewhat.

With the end of the unexpired term just a year away, we can expect the campaign for Texas GOP chairman for the 2022-24 term to begin immediately with not much time for a honeymoon for Rinaldi. Therefore expect the new chairman to come out swinging with little quarter for his ideological opponents.