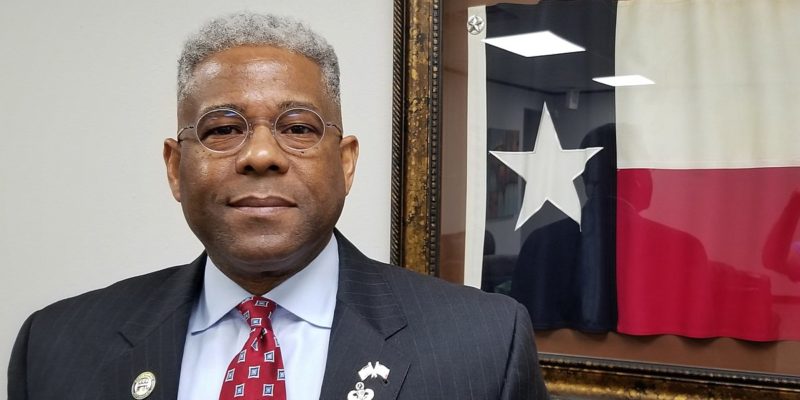 Retired US Army Lieutenant Colonel and just-resigned Texas Republican Party Chairman Allen West has entered the 2022 race for governor of the Lone Star State.  West, who served a term in the US House of Representatives from Florida, is one of several challengers to incumbent Republican Governor Greg Abbott, who is seeking a third term next year.

While making the rounds at CPAC Dallas, Colonel West fielded some questions from Mike Bayham, who was covering the conservative gathering, about his gubernatorial candidacy, including his priorities, whether someone who once held office outside Texas can win, and the rising support for the Democratic Party in the state.

MB:  Why are you running for governor of Texas?

AW:  When you look at how important Texas is to the United States of America, you got to have strong leadership at the state level.  You have seen an intentional and purposeful undermining of the sovereignty of Texas by destroying our border, and that has an incredible effect on you guys next door in Louisiana.

MB:  What is your biggest objection with Governor Abbott’s administration?

AW:  I don’t have an issue with Governor Abbott, my issue is the fact that we got to protect our border, and we got to do better with property taxes.  We got to do better as we are the number one state in the (country) for human and sex trafficking.

MB:  President Trump, who is very popular in Texas, has endorsed the re-election of Governor Abbott.  How do you plan to overcome this significant political obstacle?

AW:  It’s not a big challenge for me because I don’t serve President Trump; I serve God, my country, and Texas.

MB:  You seem to have a lot of enthusiasm amongst the attendees at CPAC.  Why are you so popular with the party’s conservative activist base?

AW:  You got to ask them that.  I just try to be a very principled conservative.

MB:  Do you believe having been an elected official in Florida will hinder your chances of winning a high office in Texas?

MB:  What are your three priorities as a candidate for governor?

AW:  Border security, property tax reform, and we got to eliminate the human trafficking and sex trade here in Texas.

MB:  Do you believe Governor Abbott has done enough to address the crisis at the southern border?

AW:  I think that we will see that upon the results of this primary.  And that I would not be in this race if I thought if there was a good job being done on our border.

MB:  Texas was once a solidly red state but in recent elections the Lone Star State has drifted from its former safe Republican haven status.  What can be done to stop this trend and reverse course?

AW:  I don’t think Texas as a whole as a state is trending toward the Democratic side. We have had major population centers trending towards the Democratic side and my concern is that is the playbook of the Left.  In my home state of Georgia that’s exactly what happened there.  The Atlanta metropolitan area, Macon, Columbus, Augusta, Savannah…that’s the result of the two avowed socialist senators they sent up to the US Capitol.

MB:  What do you bring to the table as a Republican candidate for governor of Texas that most differentiates you from your fellow Republicans in the race?

AW:  I have a lifetime of service, sacrifice, and commitment to this country.  To include being in a combat zones, and I think people know who I am and that my yes is a yes and my no is a no.  I’m not a politician, I’m a statesman and a leader