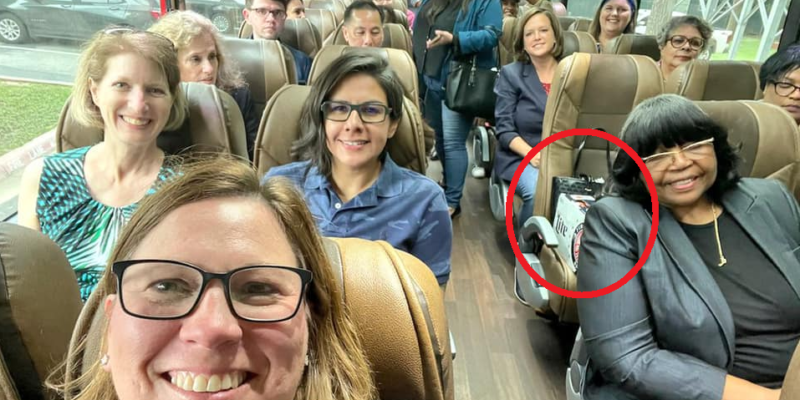 Texas House Democrats are again using the quorum-bust maneuver — this time as a means to draw attention to their opposition to the special session agenda’s call for election reform.

Given, Speaker of the House Dade Phelan cannot, by law, call for the Texas Rangers to arrest quorum-breakers until there has actually been an opportunity to break it. In this week’s case, that would be Tuesday at the first opportunity when the full House is scheduled to meet.

The first of two anticipated special sessions began Thursday, and without two-thirds of the House present business cannot legally be conducted on the lower chamber’s floor.

But the hunt is already on for the runaway Dems, who seem to be having quite a time at it. Pics shared by the 58 House Democrats showed a case of Lite beer on a bus before or after boarding a private jet to Washington D.C. — to which state Sen. Dawn Buckingham quipped “Not what I had in mind when we passed beer to go.”

The jets appearing in other pictures making the rounds on social media, according to Hayride contributor and pilot Leland Freeman, cost around $100,000 at least to charter, per plane, and one-way. The depicted House Democrat passengers, who made a big deal about masks at the Capitol over the past half-year, are all apparently unmasked.

According to Freeman, the plane the Texas Democrats flew in is what’s known as a “regional jet,” specifically an Embraer 135 that can hold up to 37 passengers. To fly all 58 would require multiple trips or multiple planes at the aforementioned cost.

The major regional airlines that use this particular jet are: Envoy (which according to Freeman is wholly owned by American Airlines), Piedmont (also wholly owned by American Airlines), and Commutair (owned by Champlain Enterprises, Inc., with a minority stake by United Airlines). Then there’s Express Jet, which is majority owned by United but is undergoing a company reboot, and Contour Airlines, which apparently operates entirely on Charter along with AeroVision International (UPDATE: RVR Aviation).

Now that we’ve assisted the hunt, let’s take a look at the possible motives. This writer had a hand in locating runaway Democrats in 2003, when they hid at a motel in Ardmore, Okla. During that session, it was already late May with a few days left in the session to go. Running out the clock was the strategy then. And in the 2021 regular session, Democrats broke quorum to nearby East Austin to stymie proposed Republican legislation (most notably election reform) in the waning days of the session. Gov. Greg Abbott line-item-vetoed fuding for legislative staff and employees as a response — restoration of which is on the special session call.

Given the timing alone, the move seems to be a coordinated publicity stunt to gin up support early on in the special session and allow activists time during the 30-day window to learn about what’s on the call and to mobilize.

But there’s also company the Dems will have in D.C. to consider. White House spokesperson Jen Psaki is already calling GOP-led efforts to reform the Texas elections proces “the worst challenge to our democracy since the Civil War,” echoed by Vice President Kamala Harris who called the move “American as apple pie.” National Democrats are banking on this being a major issue in 2022.

We can expect theatrics — especially if the Democrats are shown on national television being arrested for the sake of “fighting voter oppression.” If recent Texas political history is any guide, they won’t be arrested but will head back to Austin as soon as their point is made or their targeted bills get the axe. But with this level of heightened dialogue and partisan vitriol anything is possible.

We say “targeted bills” because there are several items on the 11-item call that even Democrats can support, including:

See our full analysis on what’s on the call here.

Are Texas Democrats really opposed to tax relief, another check for pensioners, combatting date rape, and restoring funds for legislative staffers and employees? If so, maybe they’ve had one too many of those bus beers.

Interested in more news from Texas? We've got you covered! See More Texas News
Previous Article GURVICH: To GOP Legislators, DO YOUR JOB
Next Article BAYHAM: Edwin Edwards Dead At 93