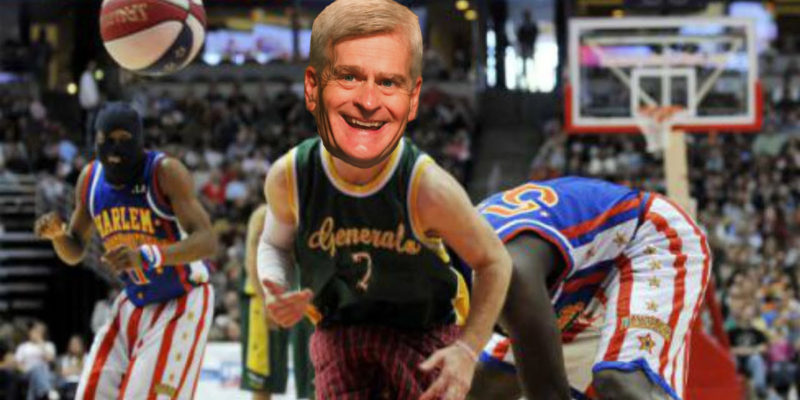 That’s a message which needs to be heard loudly and clearly by lots of Republican politicians, particularly those of the Washington Generals stripe who occupy certain legislative bodies in the nation’s capital and other places. Consensus politics was on balance a pretty good thing, but hardly a perfect thing – look what it’s done to the federal fisc, for example.

You still have “consensus” politicians out there who haven’t realized  that the earth has shifted beneath their feet, though. Take Bill Cassidy, who yesterday loudly proclaimed victory as one of some 17 Republican senators signing on to a “bipartisan” infrastructure bill which is loaded up with billions upon billions of wasted dollars on pork projects – like a pedestrian mall in Rep. Jerry Nadler’s district, for example – and which is merely a cherry on top of a larger package of wasteful and destructive federal spending the Democrats who run Capitol Hill plan to ram down America’s throat using budget reconciliation procedures.

Essentially, what’s left of “consensus” politics is Republicans caving to give Democrats whatever they want without getting anything in return.

And that’s Bill Cassidy’s record to a T. We used to excuse it. We can’t anymore. When you’re seeking consensus with anti-American communists who are literally out to wreck the country, it’s no longer earnest effort at good government; it’s weakness.

Bonchie at RedState did a nice job of describing this…

Last night, 17 Republican senators voted to advanced a currently unwritten “infrastructure” deal totaling over $1 trillion. That came after months of those same GOP members getting bamboozled by Democrats, and even Joe Biden himself in all his senility, to the point where it simply boggles the mind that they didn’t walk away from negotiations.

But what’s done is done. The bill will now be put into print, no doubt totaling thousands of unaccountable pages of special-interest spending, and those same 17 Republicans will vote for its final passage. Joe Biden will be handed his “bipartisan” achievement and all the credit along with it.

In other words, Republicans have fully embraced being the “stupid party.” Here’s the list of names if you haven’t seen it yet.

So much for Lindsey Graham 2.0. Instead of leaning into being an actual conservative, a role he chose to play the last few years of Trump’s presidency, he’s now decided that partnering up with his old buddy Joe Biden is just a brilliant move. What could possibly go wrong, right?

But what’s so remarkable here isn’t that more moderate Republicans would spit in the face of their voters. The GOP base has come to expect that. Rather, it’s the fact that they did so while Democrats were announcing to the world that they were going to pass a massive reconciliation bill anyway. Not a single one of these Republicans has bothered to explain how they plan to stop the reconciliation bill, because if they can’t, then this infrastructure deal is utterly pointless and politically idiotic. They made a deal with people who are literally promising to screw them over. The mind boggles.

Further, note how many of those same 17 Republicans opposed the push to send $2,000 checks directly to Americans last year, with the claim being we couldn’t afford it. Well, that would have cost less money than this infrastructure package they are now eagerly voting for, and it would have certainly been more accountable in regards to how the money is spent. Instead of doing the smart thing politically, knowing the entire time that Democrats were going to pass stimulus checks anyway a few months later, Republicans punted and ceded a major issue to the left. While that may or may not have cost the GOP the Senate, it certainly wasn’t a non-factor either.

This infrastructure bill these guys signed off on gives bipartisan flavor to an intensely partisan power play. We’d call it an abuse of power, but it isn’t; the Democrats have the majority they need to break the federal fisc with “infrastructure” spending which isn’t infrastructure at all, and they’re using it.

When do the Republicans do that? Well, Mitch McConnell did get a bunch of judges confirmed. As to actually reforming government or giving people back the liberty that a long train of bureaucratic and political abuses have stolen away? No.

So instead, we get lengthy press releases crowing about Corps of Engineers projects without the admission that all of those things were going to come through the reconciliation package anyway without the Republicans signing on for the responsibility of debasing the currency with all this spending.

The good news is this brand of Republicanism is going away. Newer, younger GOP officeholders are far more likely to fight than cave, because they’ve seen the corruption, abuse and stupidity of the other side and they don’t want to wear that in front of the voters.

Cassidy doesn’t seem to care, and in fact he’s a lot more perturbed by his conservative critics than the unhinged leftists who relentlessly troll his social media and who disrupted his town hall meetings his entire first term.

There will be challengers to Cassidy when he comes up for re-election in 2026. They’ll come from the Right. We know one of them, and he’ll be formidable and not a “consensus” politician.

Because consensus politics is dead. The Democrats abused it and killed it. The only question is how much longer the Stupid Party continues trying to give it mouth-to-mouth.