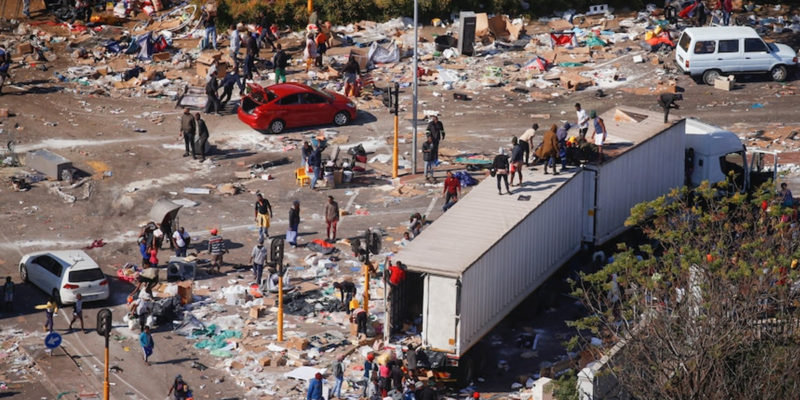 Earlier this week, Sen. Marco Rubio gave a truly wonderful speech on the demonstrations in Cuba and their significance and origins. It’s worth taking some time out of your day to watch it, because while Rubio isn’t perfect this is a subject on which he is, or ought to be, the conscience of the nation.

It’s a fiery, impassioned cruise missile of truth. Rubio puts paid to the lie that the people in the streets of Havana and elsewhere are demonstrating because they haven’t received COVID vaccines or that they think the Communist regime in that country is guilty of “mismanagement” or “maladministration.”

Or that, as the liars and wannabe tyrants who run today’s Democrat Party and envy the Cuban regime’s unlimited political power have settled on as their Cuba narrative, that the suffering in Cuba comes as a result of the U.S. trade embargo.

They want freedom, not vaccines. They want to live as citizens, not beasts of burden for a select Marxist few. Rubio hammers that point home.

What you’ll notice about all of the footage that has escaped from Cuba is that while those demonstrations have been somewhat violent – the violence coming chiefly from the thugs the regime has sent out to beat the demonstrators into compliance – what you don’t see is stores looted, cars and buildings burned.

This isn’t a rabble. It’s an organic, widespread show of moral force by a people who are fed up with tyranny, oppression and lies.

And as Rubio noted in his speech, the “insurrection” in Cuba has been inspired by artists. It’s come from poets, painters and musicians. In fact, the prime inspiration for the demonstrations is a song, and a very good one, by a handful of Cuban musicians which came out earlier this year. It’s called Patria y Vida, which is a brilliant play on the Cuban revolutionary maxim “Patria o Muerte.” For those of us not fluent in Spanish, “patria o muerte” translates to “Motherland or Death.” This song proclaims “Motherland AND Life,” which is a breathtaking contrast that, frankly, is what the founding of America boils down to. The song draws pretty heavily from the principles of the American revolution in its message.

It’s also worth your time…

“Who told you that Cuba belongs to you?”

Absolutely perfect sentiment, which frankly is applicable to tyrants – actual and wannabe – all over the world.

The Cubans are motivated by the power of ideas. They yearn for freedom, and that’s a hell of a lot more important than looting a bunch of empty Communist stores.

And now, South Africa. Which is being systematically destroyed by rioters and looters.

Sky News Australia’s correspondent from Durban noted the rioting and particularly looting had calmed down a bit, and there’s a reason for that – there is virtually nothing left to loot there.

Starvation comes next, because they’ve completely disrupted the national supply chain and the trucks won’t move.

And the stores won’t restock.

Why would they restock when it’s inevitable that they’ll just be looted again?

The allies of former kleptocrat president Jacob Zuma touched off this looting by encouraging it. Zuma’s people are in a war with the allies of current president Cyril Ramaphosa, but they’re not fighting each other. Instead, Zuma’s people are attacking the whites and the Indians, because they’re the ones who own all the stores and run the economy – by shutting down the economy Ramaphosa is in charge of, that’s how they hurt him without there being black-on-black violence.

In other words, this isn’t a battle of ideas which has resulted in violence and destruction and ultimately societal breakdown. It’s a battle for naked political power among tyrants.

The difference is very stark. And it’s instructive. Highly so.

Which one of these examples is closer to what happened last year in Minneapolis, Kenosha, Portland, Chicago and Seattle? And what does that tell you about Black Lives Matter and Antifa?

By the way, Black Lives Matter has weighed in on the Cuban demonstrations.

“Black Lives Matter condemns the U.S. federal government’s inhumane treatment of Cubans, and urges it to immediately lift the economic embargo. This cruel and inhumane policy, instituted with the explicit intention of destabilizing the country and undermining Cubans’ right to choose their own government, is at the heart of Cuba’s current crisis. Since 1962, the United States has forced pain and suffering on the people of Cuba by cutting off food, medicine and supplies, costing the tiny island nation an estimated $130 billion,” BLM released in a statement. “Without that money, it is hard for Cuba to acquire medical equipment needed to develop its own COVID-19 vaccines and equipment for food production. This comes in spit of the country’s strong medical care and history of lending doctors and nurses to disasters around the world.”

“The people of Cuba are being punished by the U.S. government because the country has maintained its commitment to sovereignty and self-determination. United States leaders have tried to crush this Revolution for decades. Instead of international amity, respect, and goodwill, the U.S. government has only instigated suffering for the country’s 11 people – of which 4 million are Black and Brown,” the statement continues. “Cuba has historically demonstrated solidarity with oppressed peoples of Africa descent, from protecting Black revolutionaries like Assata Shakur through granting her asylum, to supporting Black Liberation struggles in Angola, Mozambique, Guinea Bissau and South Africa.”

Things have become very clear. They may never have been clearer. All you have to do is open your eyes.