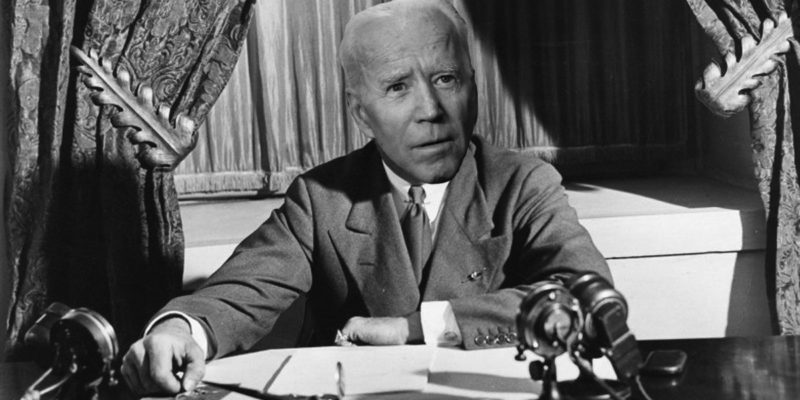 In a recent speech purportedly about Afghanistan, President Biden slipped in an oft-repeated concept – another iteration of the New Deal – that is more impactful than anything his feckless disaster in Kabul could ever bring on. Because we all were waiting to hear about Afghanistan most of us probably missed it or in the alternative missed the significance of it.

His words were clear, his policies and the “Green New Deal” that had just passed the House would effectively restructure America according to a vision brought to us by Pelosi, AOC, Sanders, and all the far-Left wackos in the reconstituted Democratic Party. Restructure America in way that is contrary to how we became the strongest nation is history.

That sounds like just more political rhetoric, but he meant it and when imposed by that slim majority of Democrats it likely means the end of our Republic as we have known it, to be replaced by a La La Land that has no basis in tradition or economics.

The term “Green New Deal” has two parts. The “Green” part is politically sexy, though will cost trillions in wasted government imposition with little likelihood of showing any results. But it’s the “New Deal” part that is treacherous. The Green part is there to disguise the New Deal part and to tie its ramifications to something that the media has convinced us is about to befall us.

Not unlike the fear-mongering use of the Green part today, in response to the universal concern generated by the early 1930s depression, Franklin Roosevelt pushed through the first New Deal. And not unlike the New Deal part of today, his was a huge leap toward massive government growth. It placed government in the role of collecting and recycling huge amounts of theretofore unheard-of taxes, a role nowhere to be found in our Constitution. Roosevelt demanded and got massive revenue streams from citizens and corporations and, after the usual government waste, sent some of it back to the people in amounts chosen by politicians. And like all wasteful government policies, though the supposed emergency of the depression diminished generations ago, the whole thing has been on autopilot and has continued to grow exponentially.

The result? History has shown that Roosevelt’s policies actually forced us into and prolonged the Great Depression. Worse, when jacked up by President Johnson’s Great Society Program of the 60s, these government policies have resulted in a permanent underclass that is wholly dependent upon political largesse. Broken families, crime, drug abuse, poor education, low self-esteem, and on and on. All brought to us by big government dependency.

We have allowed politicians to take massive amounts of our earnings and to send us back a limited amount in a form that they choose, a form that is all tied up in waste and favoritism. This leaves little ability for state government to generate revenues and even less for cities. Wonder why so many of our cities are crumbling and our states can’t maintain infrastructure? The answer lies in the New Deal and the other tax and spend programs that we have allowed the federal government to compound. Though spending of taxpayer money would be far better if kept local, we let the money flow to Washington. So, there is not enough left at the city and state level to fulfill our needs.

Without a doubt the Green part of the Green New Deal will waste trillions. But we can survive that. But the New Deal part is a trap that will further wipe out resources available to local/state governments. On top of that it will add crushing long-term taxation that will force ever more people onto government teats as economic opportunities dry up. And this says nothing about the loss of freedom to far away bureaucrats that the Green New Deal will ensure.

President Biden knows exactly what he is doing. He wants to restructure America and he knows he only has this year to do it. The danger to our Republic is that he likely has no idea of what he is allowing to happen.

When added together the New Deal, the Great Society, and the Green New Deal would be a crushing blow, one that I am not sure my children’s America will be able to recover from.