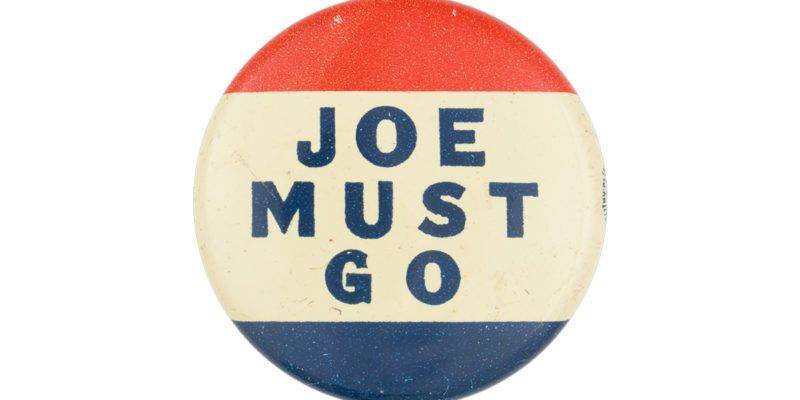 After more than seven months of the worst presidency in American history, Joe Biden must leave the White House. He has been a complete and total disaster.

Almost every Trump voter understood that Biden would be an unmitigated failure as President. His 50-year career as a politician clearly showed that he was an admitted plagiarist and a serial liar who was wrong on almost every foreign and domestic issue.

He limped into the Democratic Party’s presidential nomination due to the worry that his major opponent, U.S. Senator Bernie Sanders (I-VT). was too much of a socialist. Ironically, Biden is now pursuing a socialist agenda that is very pleasing to Sanders.

In the presidential race, he was “elected” in a very disputed race against President Donald Trump due to a variety of factors. Most importantly, Democratic governors used the excuse of the pandemic to allow for massive and unverified “mail-in” voting that totally changed the dynamic of the election.

Upon taking office, Biden unleashed a torrent of executive orders and policy decisions that were designed to undo everything President Trump had accomplished. As President, Biden has appointed a radical cabinet of progressives to implement his socialist agenda.

As President, Biden has been wrong on every major decision. When he stopped construction of the border wall and the Keystone XL pipeline, Biden listened to his party’s left-wing instead of exhibiting common sense.

Thus, our border is wide open, and over two million illegal aliens are projected to arrive in our country, many sick with COVID, this year. Our country is once again begging OPEC for more production because we are no longer energy independent. Our cities are in crisis as crime has skyrocketed and inflation is on the rampage as prices for gasoline and other essential commodities have increased dramatically.

Despite all of these horrific mistakes, nothing compares to Biden’s catastrophic handling of the U.S. troop withdrawal from Afghanistan. This is clearly his biggest disaster for Biden has now given our enemy, the Taliban, a tremendous victory, and provided Islamic terrorists an American defeat to use as a jihadist recruitment tool.

In the last few weeks, the United States has looked both weak and foolish in granting the Taliban control of our airport, our embassy, and our massive cache of weapons. Most importantly, this enemy now controls the fate of thousands of innocent American citizens.

In 1979, our country was traumatized because Islamic extremists held 52 Americans hostage at our embassy in Tehran. The crisis only ended when Ronald Reagan was inaugurated as President and the terrorists in Iran were unwilling to test his mettle. If they had provoked Reagan, it would not have ended well for them, so they released our hostages.

In Afghanistan, the Taliban is holding thousands of our citizens hostage because they are not allowing them access to the airport to leave the country. When Trump dealt with the Taliban, they understood he was a tough President who meant business. This is why none of our troops were killed in the last 18 months of the Afghanistan conflict.

It was their fear of what President Trump may do that motivated their cooperation. They knew that Trump had rebuilt our military, had ordered the death of the world’s top two terrorists, and had destroyed the ISIS “caliphate” in Syria.

Their plan was to wait for Biden to become President and then act. Amazingly, Biden announced the withdrawal date from Afghanistan and then removed our troops before securing the escape of thousands of American citizens.

For the past few days, Biden has lied about the situation in Afghanistan in his press appearances. Contrary to Biden’s statement, it has not been possible for thousands of Americans to reach the Kabul Airport. In fact, a U.S. warning was issued for Americans to stay away from the airport because of safety concerns.

While Biden claimed Al-Qaeda had not returned to Afghanistan, spokesmen from his administration contradicted his assurances. Both Al-Qaeda and ISIS are surely back in Afghanistan and will certainly establish new terrorist training camps in the country because they know they will have the support of the Taliban.

Sadly, America is back to where we were in 2001, except that we have lost over 5,000 military heroes and contractors fighting in Afghanistan. In addition, the American taxpayers have paid over $2 trillion for this futile exercise in nation building.

The latest reports indicate the Taliban have seized a tremendous amount of our military equipment, including 200 aircraft, 600,000 weapons and 75,000 vehicles, along with 11 former U.S. military bases. Not only do Taliban terrorists control our military assets, but they also control the fate of thousands of American citizens and our Afghan allies.

Biden created this calamity and must be removed from office. Unfortunately, there are only a few options to allow for this result. He can resign, which is doubtful. He can also be impeached and convicted, and that is also unlikely because corrupt Democrats currently control the U.S. Congress.

The most likely option is to utilize the 25th Amendment. In this case, his removal can be triggered by an official declaration to congressional leaders from the Vice President and a majority of his cabinet that the President is “unable to discharge the powers and duties of his office.”

If Biden hangs on until the mid-term election and the Republicans take back control of the Congress, impeachment hearings can be commenced. Unlike President Trump, Biden deserves to be impeached and removed.

Coupled with his policy disasters that have destroyed border security, created chaos in our cities, threatened our economy with renewed inflation and energy dependence and endangered our national security with the Afghan withdrawal debacle, Biden is mentally compromised and unfit to uphold the duties of the presidency.

He is suffering from a serious mental decline that is obvious to anyone who watches his speeches or interviews. To make matters worse, his condition is deteriorating.

Joe Biden must go; the survival of our country depends on it.