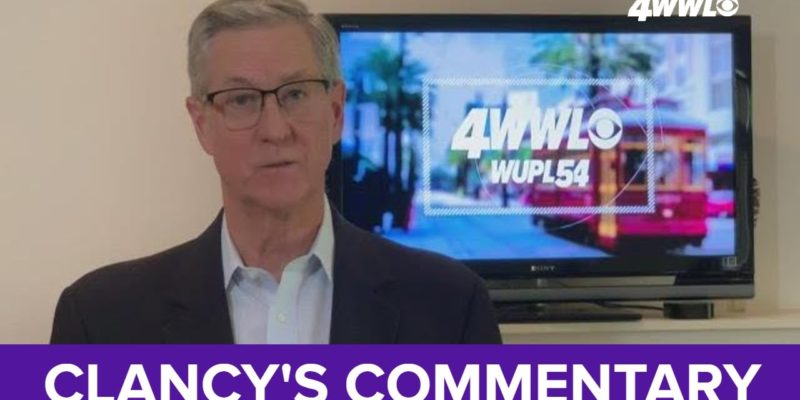 “Louisiana has set another new record in the past week,” said DuBos. “We had the highest number of COVID deaths per capita in the country.”

DuBos’ self-righteousness was oozing out of him as he made it clear who he believed was responsible for all the dying.

“I have some questions for those who continue to defy medical experts and refuse to get vaccinated. How many deaths are acceptable?  How many? 1,000? 10,000?” asked DuBos.

The unvaccinated most likely didn’t give much credence to the raging DuBos’ hyper-judgmentalism as he intensely glared at the camera. The guy was pissed.

DuBos then smugly accused the unvaccinated of caring only about their family and no one else.

“How many will have to die before you get vaccinated? I have a suggested number. One. Just one if that one is your spouse or your parent or even your child,” said DuBos.

But DuBos didn’t stop there. He went for the jugular, accusing some of the unvaccinated of putting their love for freedom above love of family.

“And if that (death of a family member) wouldn’t convince you, don’t talk to me about your freedom because no one, no one, has the right to endanger others, not even one’s own family.” said DuBos.

This is a familiar chorus from leftist media types willing to violate our constitutional rights and strip away personal liberties all in the name of safety.

But DuBos’ scathing rebuke of WWL’s unvaccinated viewers is built on a faulty premise.

The vaccinated are just as likely to transmit COVID as are the unvaccinated.

“Our vaccines are working exceptionally well. They continue to work well for delta with regard to severe illness and death. They prevent it. But what they can’t do anymore is prevent transmission,” CDC Director Dr. Rochelle Walensky recently told CNN.

The CDC also reports the unvaccinated that have had COVID and are now loaded with antibodies are far more resistant to the delta variant than the vaccinated.

And the well-regarded Journal of Infection reported last week that those that have had COVID are much more likely to get sick if they take the vaccine than those that have not had the virus.

And the scientists suspect those with antibodies may be more at risk of spreading the virus if they take the vaccine after having COVID.

“Non neutralizing antibodies generated by past infections or vaccination fail to shut down the pathogens upon re-exposure.  Instead, they act as a gateway by allowing the virus to gain entry and replicate in cells that are usually off limits. That, in turn, can lead to wider dissemination of illness, and overactive immune responses that cause more severe illness,” according to scientists writing for the Journal of Infection.

I’m now fully vaccinated with the two shot Pfizer vaccine. I’m 61 and have too much girth. For me, it seemed like the logical choice.

It seems clear getting the vaccine helps fight the virus if you get it. It makes it less likely you’ll end up in the hospital. Most COVID patients in the hospital are unvaccinated.

In America, we’re supposed to be free to evaluate personal health decisions without the full force of government demanding compliance.

Will Sutton, an Advocate/Times Picayune columnist, disagrees. Sutton recently took a break from almost exclusively writing about how racist we all are and trying to stir up racial tensions to address the topic of vaccine mandates.

In another column on vaccines, Sutton couldn’t resist his obsession with race.

“The national narrative is that we are suffering because the coronavirus continues to infect more people,” wrote Sutton. “And it’s white conservative Republicans who are the problem. Certainly, there are stats and info to show the influence of politics and voting histories to support that idea period.”

The media is famous and very creative when it comes to blaming all problems on white conservatives.

When DuBos glared at the WWL camera Tuesday night scolding the majority of unvaccinated viewers, you know he was thinking, you @#$% white conservatives!!!

Leftists like DuBos and Sutton are always on the lookout for excuses to take away our freedoms. Their types are emboldened in the past year and a half as Americans have willingly laid down their liberty. So many have paid the ultimate price for that freedom we so easily surrendered.

But there will come a point when freedom-loving Americans will say enough. Enough!

Dan Fagan is a columnist and hosts a radio show for IHeart Media. Email: [email protected]